For years and years, I dreamt of having my own greenhouse. Ideally, a wooden greenhouse with glass windows. In a temporary residential location, however, this is less practical because of the uncertainty about when I need to move. Moreover, they are quite expensive, those gorgeous greenhouses. That’s why I have postponed that particular purchase until I live somewhere where I can stay for a long period of time. But now I have bought a greenhouse anyway – a small polytunnel greenhouse that is easy to move and a lot cheaper. And I’m so happy with it! 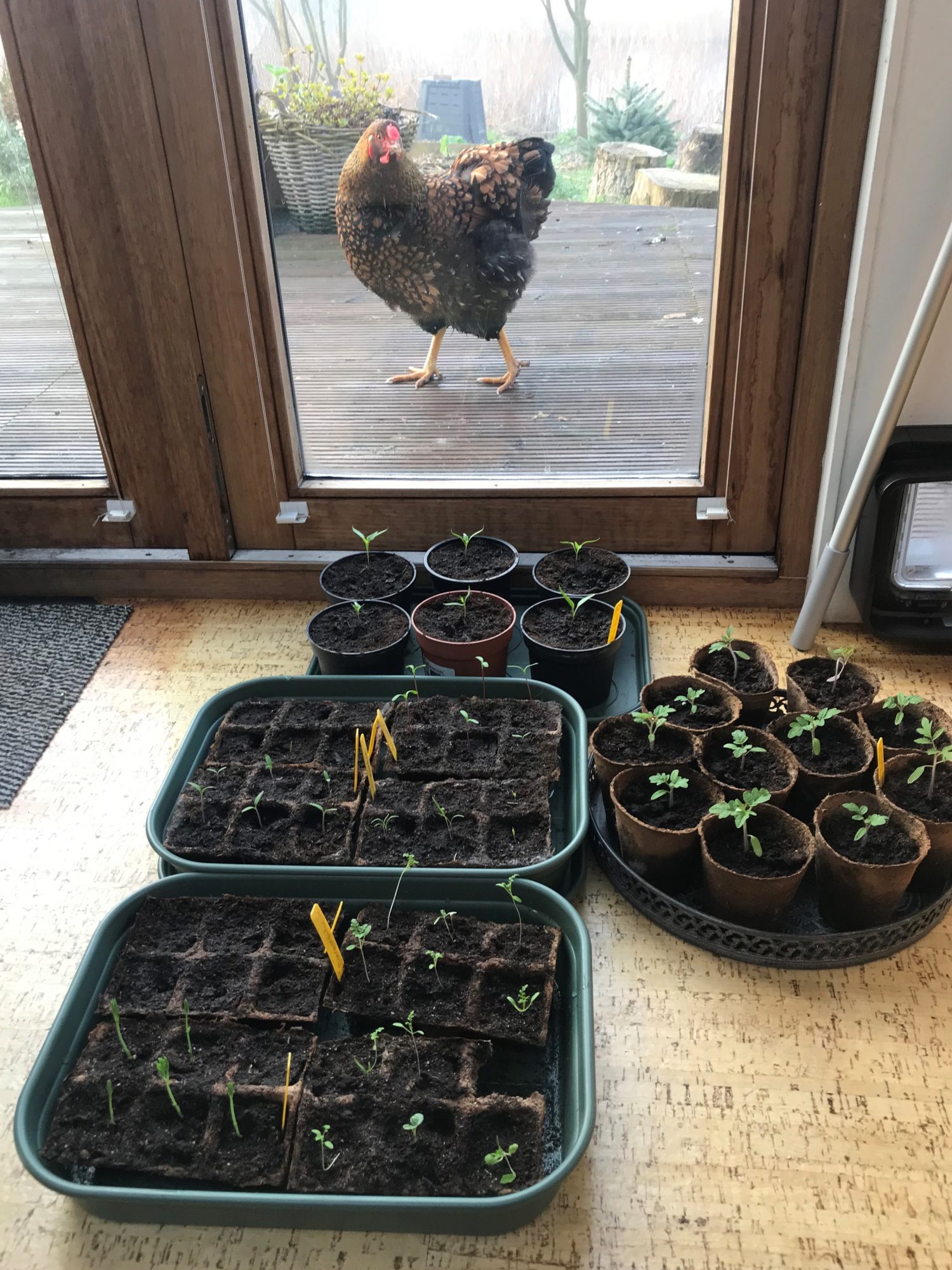 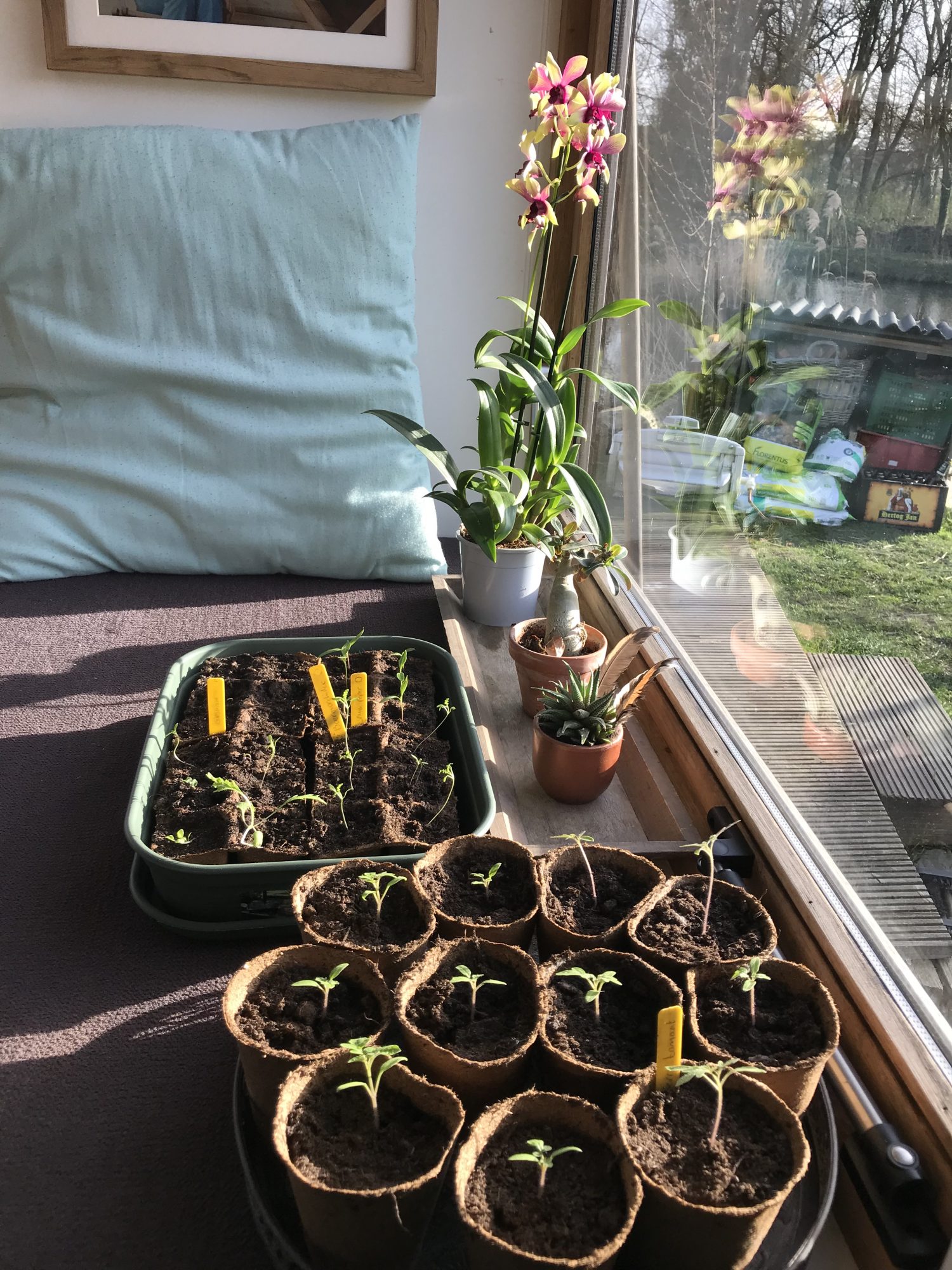 Every spring a plant party happens in my house. Everywhere there are seed trays and pots with young plants. In front of the double door, by the window in my sitting area and by my desk. This is not really convenient though, since it takes up a relatively large amount of space if when you live in a Tiny House and I kept pushing them aside and moving them along with the sun. But I just love gardening, so I gladly regarded that inconvenience as a small price to pay. The plants are transferred to the garden when they are large enough, and it no longer freezes during the night. But from February through April, they needed to stay in the house. “Oh, if only I had a greenhouse!” I would sigh, “then I could sow in there and sow much more than now. In addition, crops can be grown in a greenhouse that simply do less well outside, such as peppers and eggplants. But yeah, well…”

It may be that the corona crisis had a hand in it; I suspect it did. I have a little more free time and a sense that it is (perhaps even more than usual) wise to invest that time in developing skills that increase self-reliance. Having the urge to grow more food of your own is not surprising when you see empty shelves in the supermarket, is it? ;)

That, combined with my long-cherished desire to have a greenhouse, made me decide to take the step and choose an acceptable alternative. Not a glass greenhouse, but a tunnel greenhouse measuring three by two meters. I found one that was very affordable and would be delivered to my home. What more do you need! While I was waiting for the delivery, I became more enthusiastic about the opportunities that this greenhouse would offer me to take my vegetable garden to the next level. 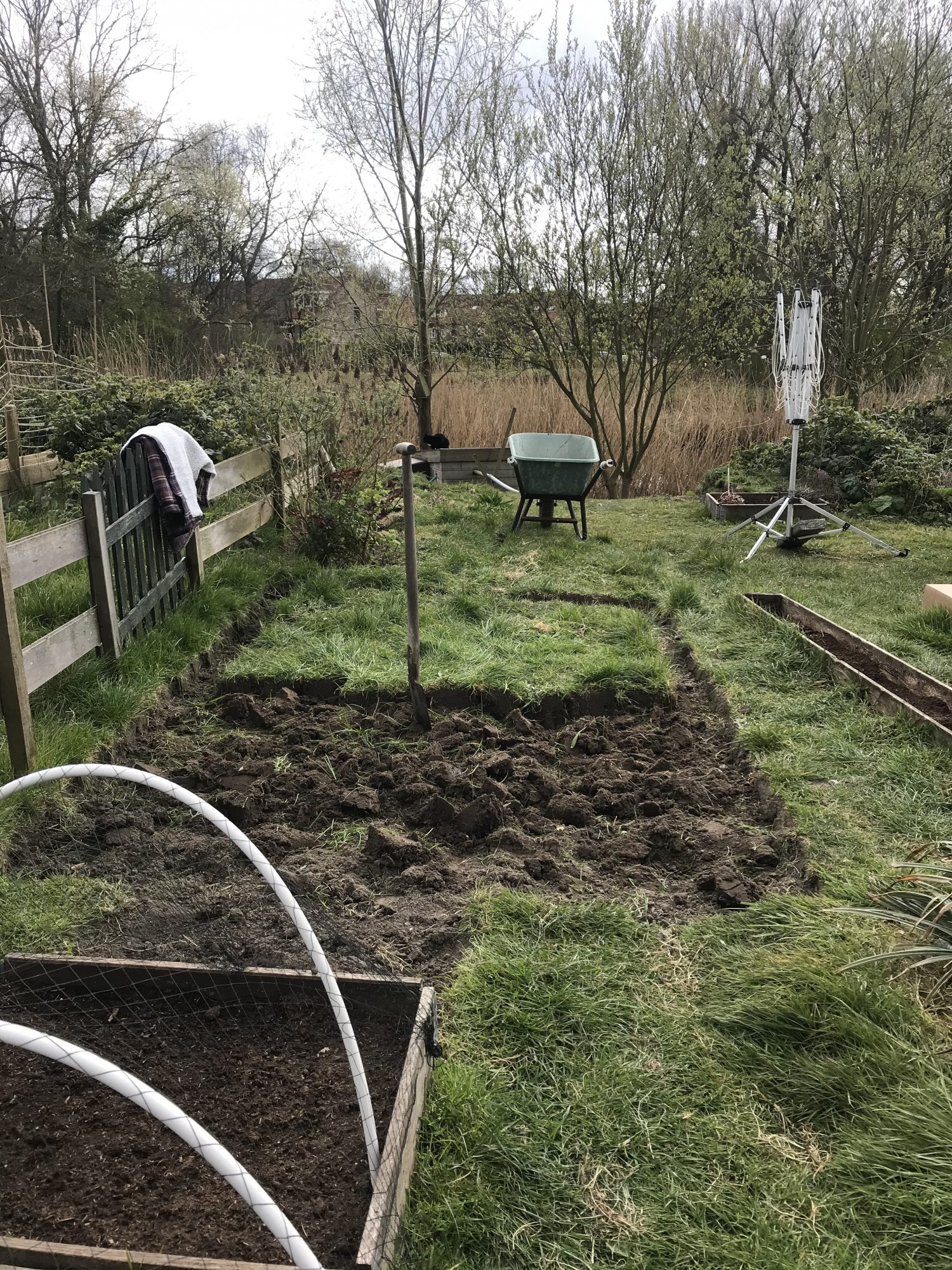 In the meantime, I prepared the place where I wanted to put my greenhouse by preparing the ground by clearing the turf. A tough job, but I could use some exercise anyway and the weather was good. The greenhouse was delivered a day earlier than expected so I had to finish it quickly. I really wanted to put it up! That also took a few hours of work on my own, but it worked out quite well. I had bought four ground anchors so that I can properly secure the greenhouse from the wind, and I also dug in the long flaps of sail that protruded. It can be quite windy here, so that is certainly necessary. I could not bear the thought of my beautiful greenhouse blowing away! 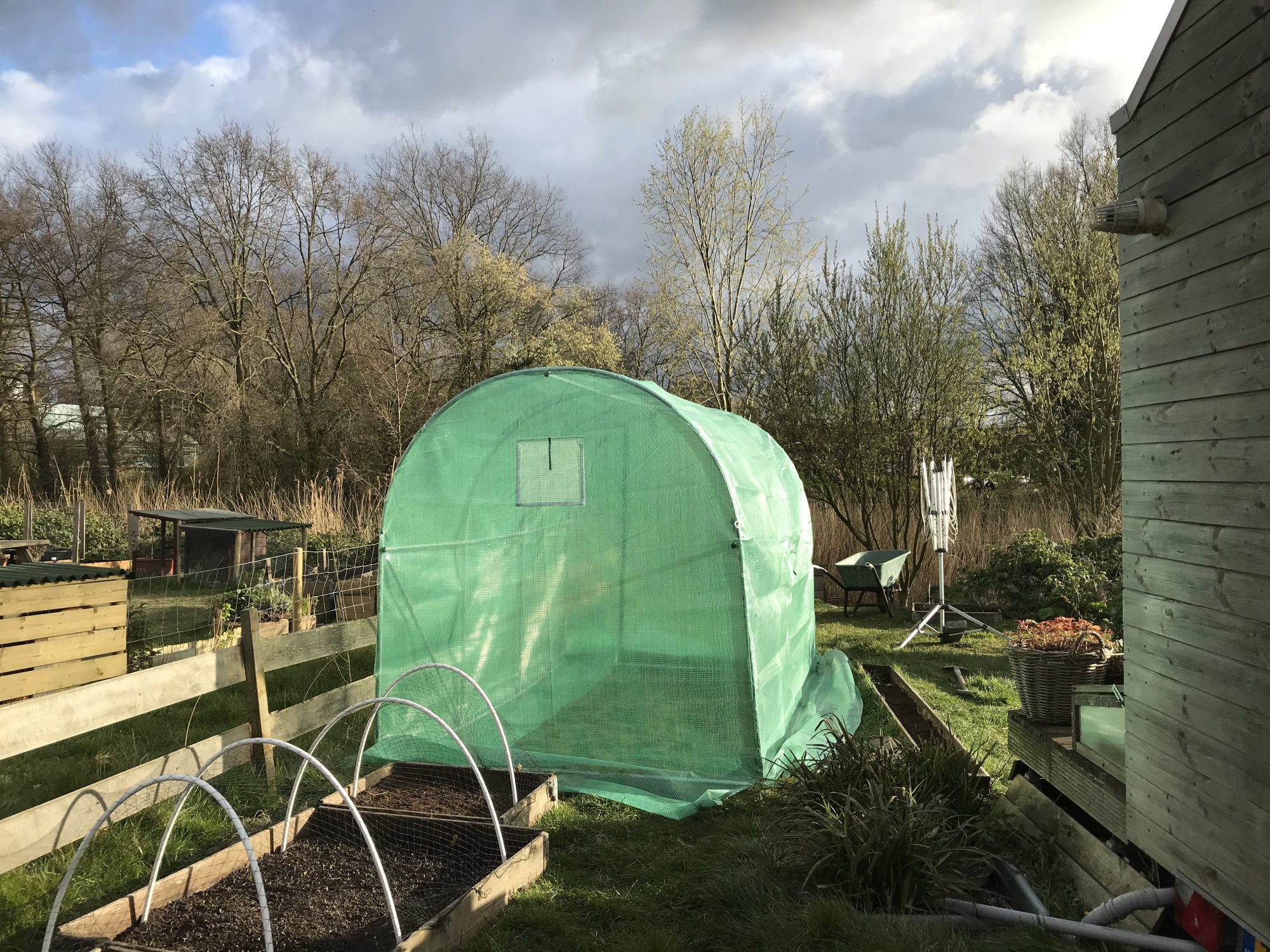 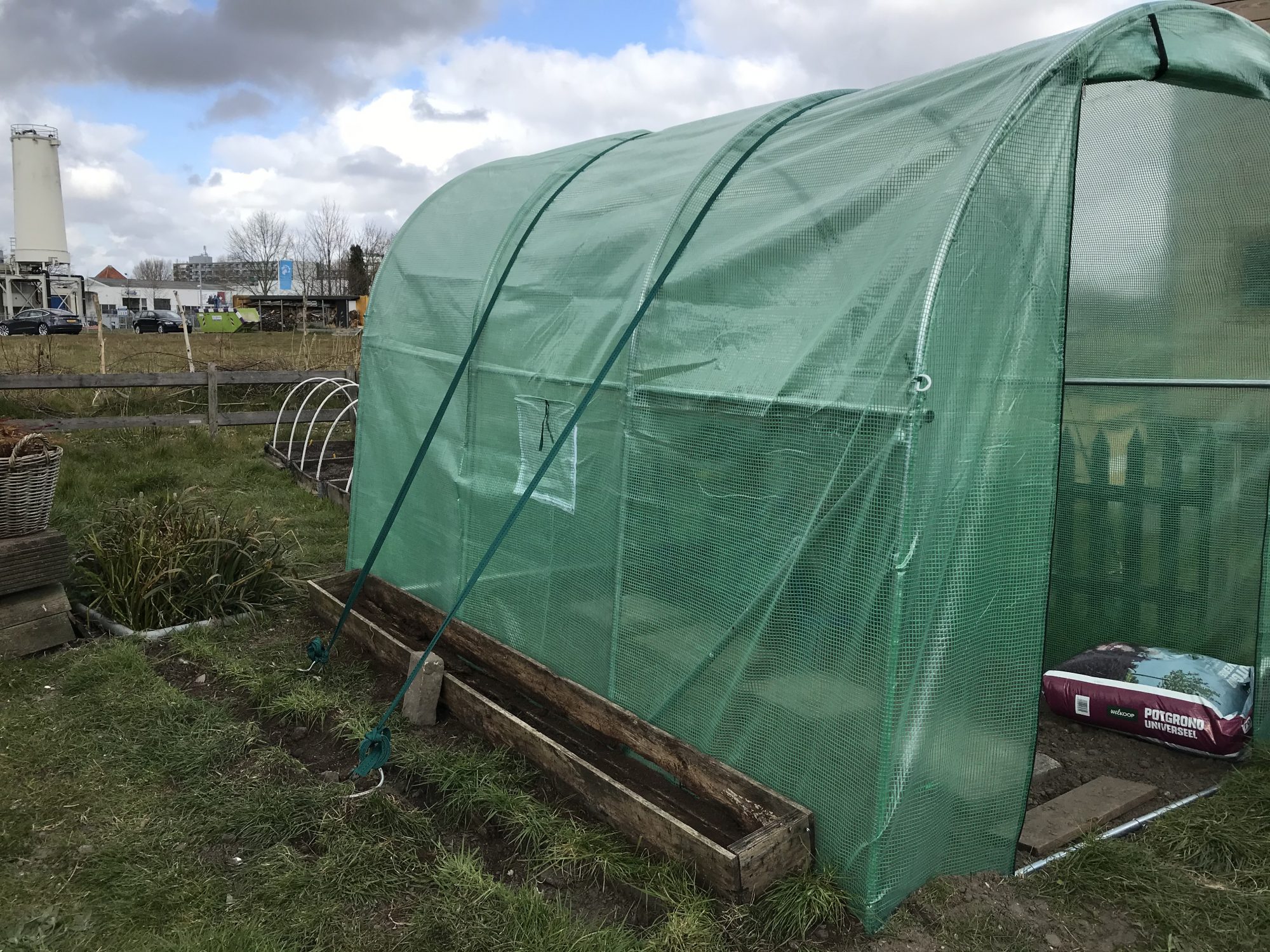 The size of the greenhouse is just perfect for my garden. I can easily stand upright in it and there is enough space. I wanted to make a sowing table in it and also make raised garden beds to plant cucumbers and tomatoes in. My father had two handy height-adjustable trestles in the attic and I had stored some wooden boards under my deck that I could use as a table top. Just the right length. There were also two thick beams to make a raised vegetable garden box, also stored under the deck. I had long since forgotten that I had them. It was meant to be! With a borrowed screwdriver from a friend, I screwed the box together and put it in the greenhouse. I thought to myself, “Before I lived in a Tiny House, I really didn’t do things like this!” A-technical, that’s how I considered myself. And although you may think that screwing together a few planks and assembling a greenhouse construction kit does not amount to anything, for me, the fact that I can now do these things myself makes me kind of proud :) 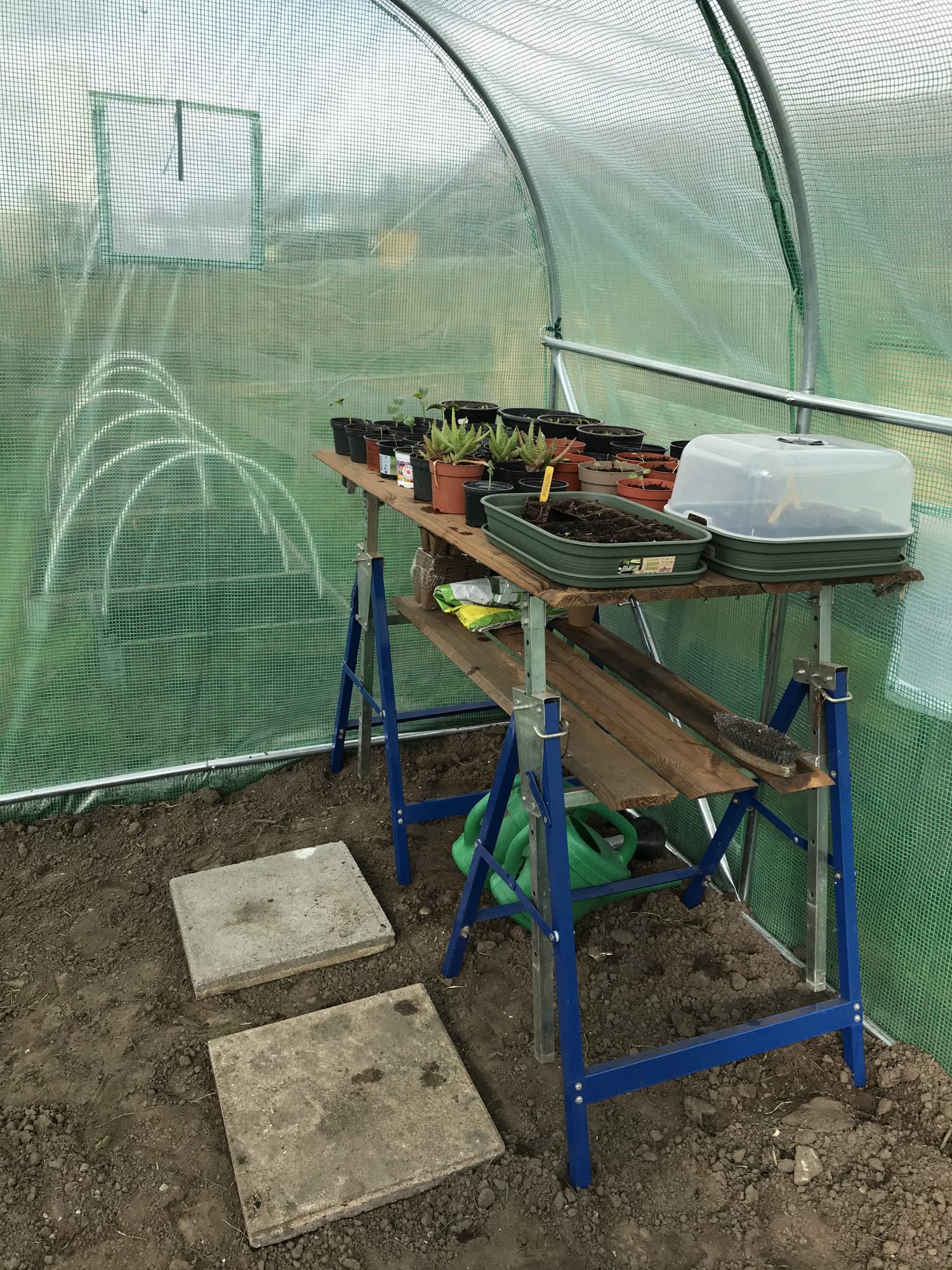 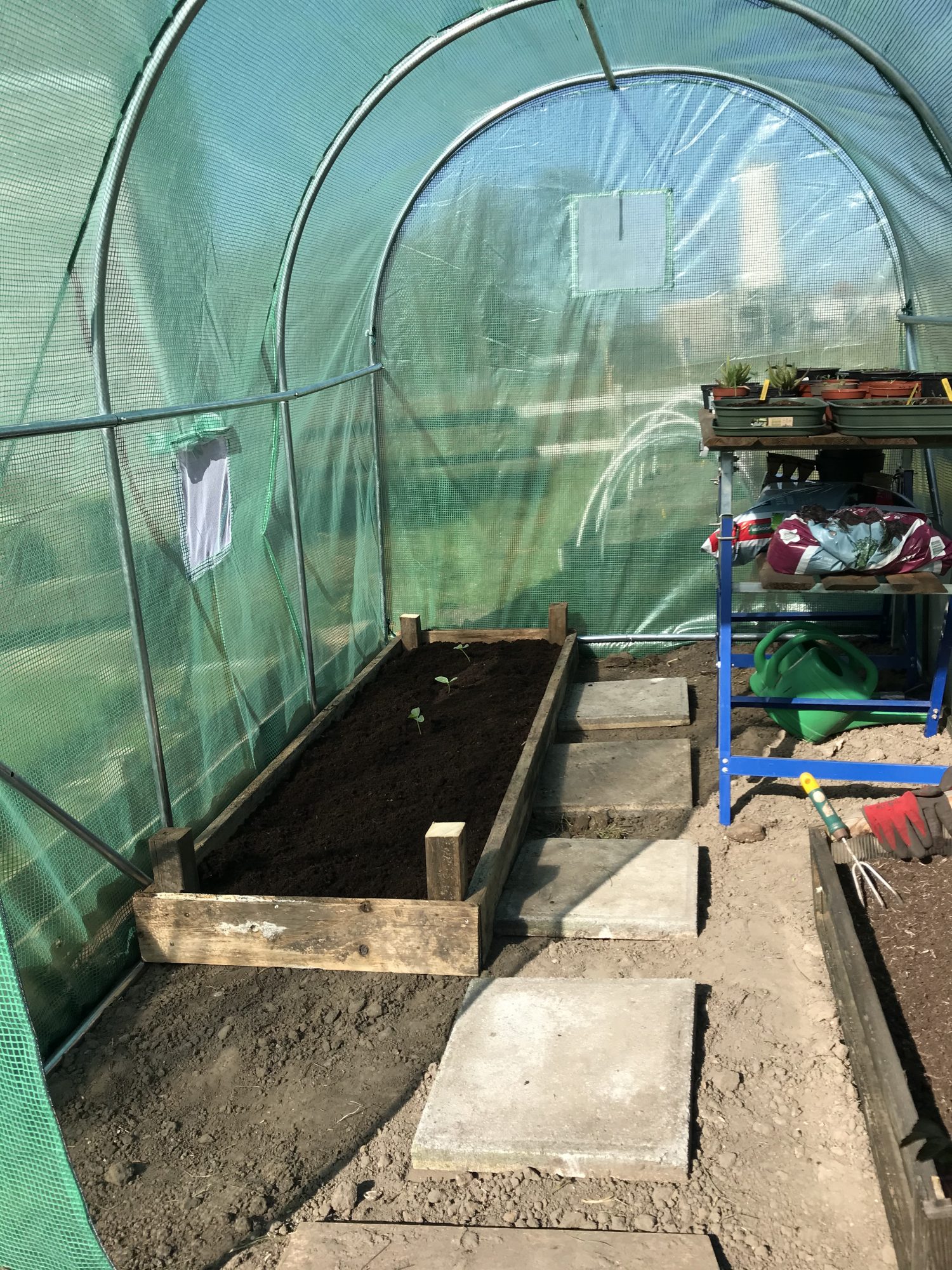 The plants that I had already sown at home got a nice spot on the sowing table and I started sowing more plants. Great fun! Tomatoes, cucumbers, cup malva, hollyhocks, cosmos, peas, peppers, sugar snaps, various lettuce varieties, you name it. The cucumber plants were already big enough to put in the raised tray. My old cold container on my veranda got a second life as a raised container where I put in lettuce. Oh my, this makes me happy! I would like to do a lot more, but where I live, we are limited to growing in vegetable garden containers. This is because the quality of the soil is not so great that you can do vegetable gardening in the open ground. But if you appreciate what you have and are a little creative, then so much is possible. I use pallet edges as raised vegetable garden containers in the garden and plants have been growing in them for several weeks: spinach, radishes, palm cabbage, leek, calendula, chard … Some are doing well, others a little less so because I used some older seed. I now have a storage bin full of opened sachets of seed. Seed loses its ability to germinate after a few years, but often quite a few seeds will still germinate, even if they are past their expiry date according to the packaging. I also have a patio apple tree in a pot that yields a few apples every year. On a small scale you can do pretty awesome things :) 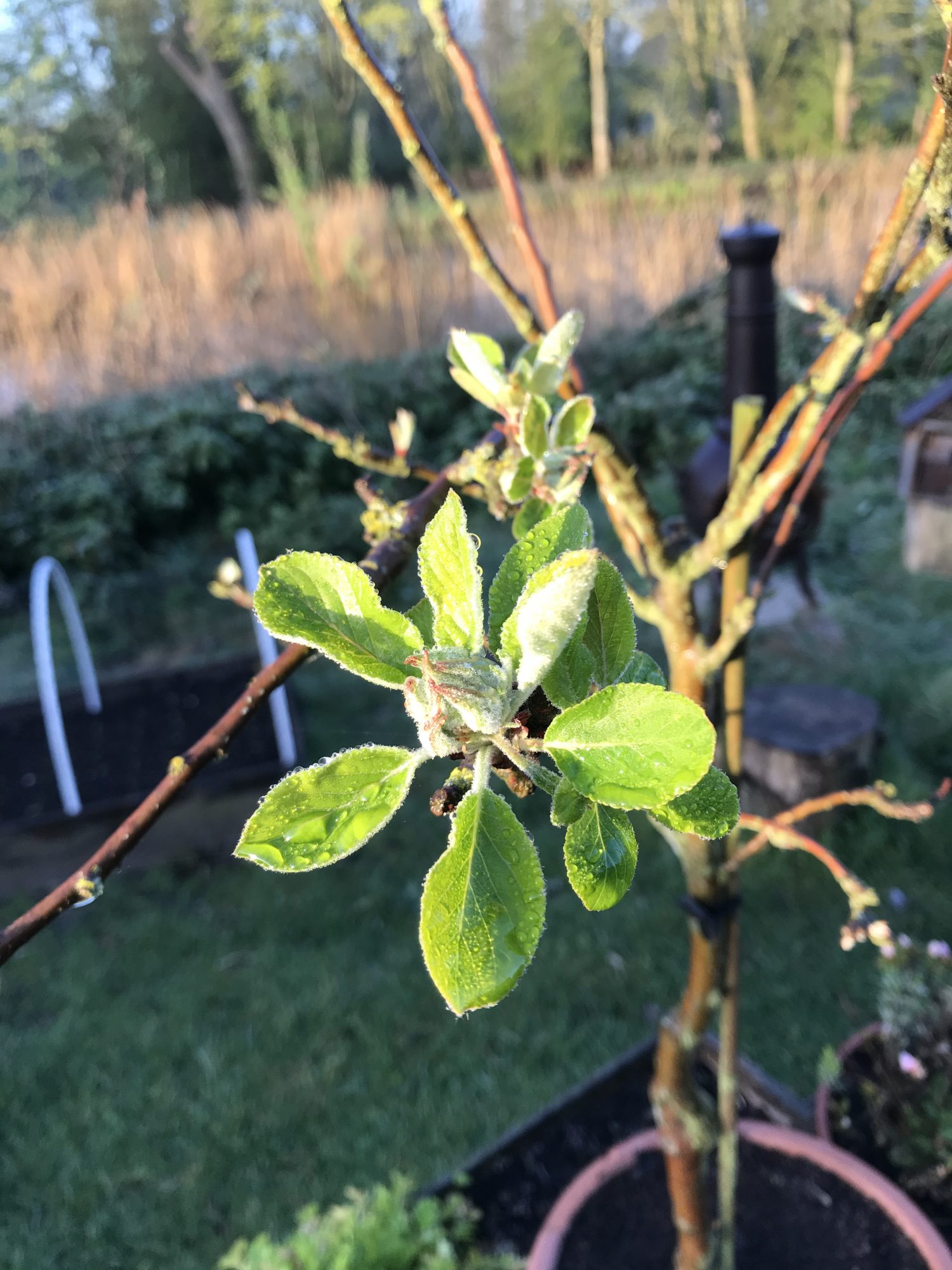 I can’t wait for the first harvest. Eating from your own garden is the best! And with my greenhouse I now have so many more options to grow my own crops. This really is next level vegetable gardening for me.  Life can be so wonderfully simple, eh?  :)