Because of all the consternation that was made about the program on SBS6 called “Je eigen Droomhuis” – which was totally devoted to the build of my Tiny House, I never had time to write a blog about what happened to me last week. The program was wonderful, I must admit. I am thrilled with it. It is a lot better than a photo album as I now have a professional film depicting my Tiny House adventure, including overhead photos taken with a drone and interesting interviews. The program is temporarily offline, but I hope that it will be online soon. You can then watch it via this link.

But as I was saying, last week I had a serious problem. On Tuesday evening I tried lighting a fire in my wood burner, but to no avail. I had no draft whatsoever. I tried again on Wednesday but couldn’t get the fire going. The whole house was covered in smoke. The more I tried, the more the fire died. Every Wednesday evening we have a Tiny House Netherlands meeting via Skype, and I sat in front of the woodstove with my laptop on my lap and my headphone on my head, cursing and coughing, trying to get the fire going. I got up a couple of times to open the door because the room was filled with smoke… again. I couldn’t understand what was going on. My wood was dry; it wasn’t a misty evening; I had the right ventilation vents open…  Eventually I got the fire going and went to bed. 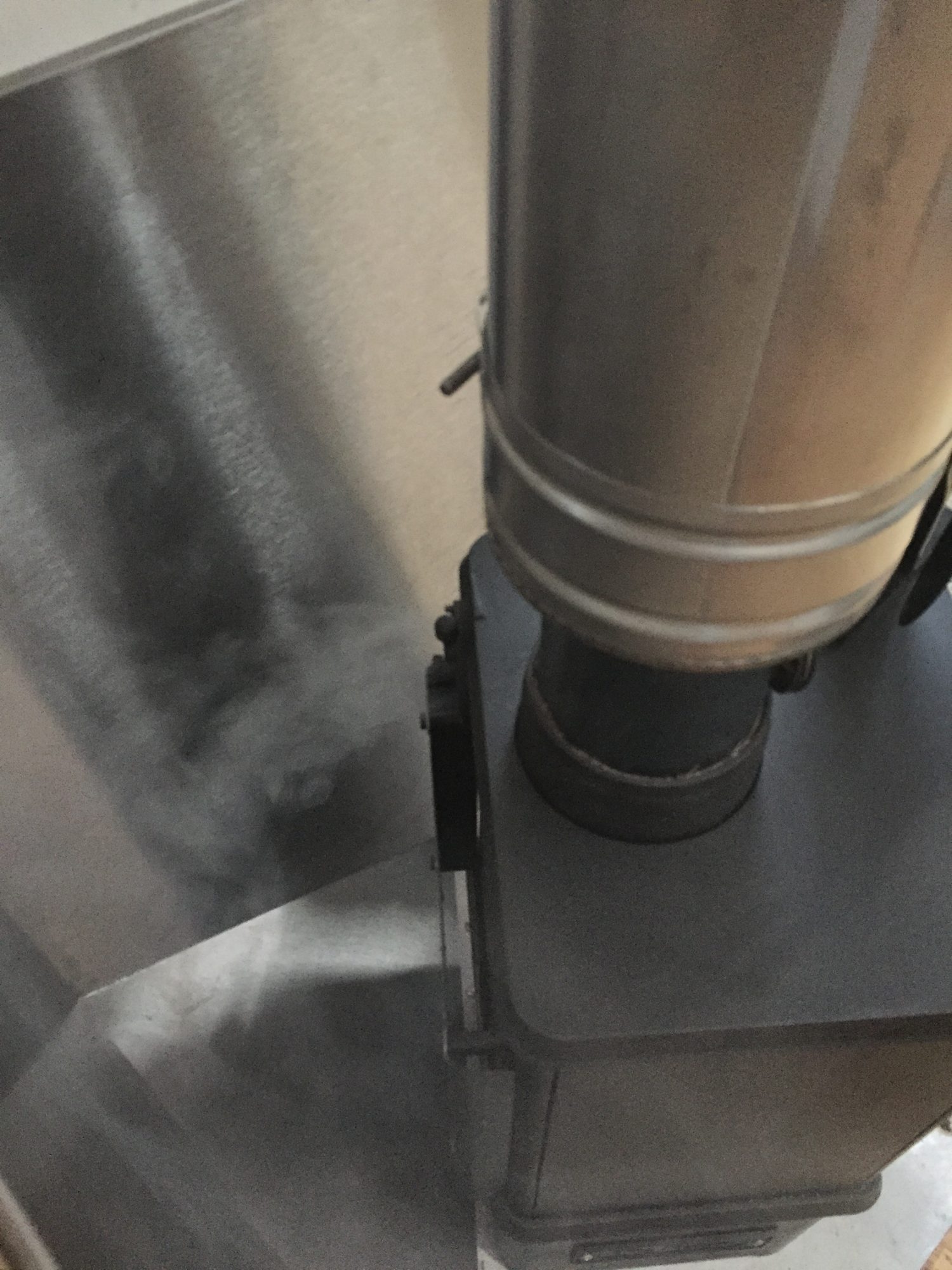 In the middle of the night I woke up to a very loud alarm. I was disoriented and couldn’t find the light switch, but eventually got the light on. I then realised that the alarm was coming from my carbon monoxide monitor. Oh no! I opened all the windows and the door. I then tried switching the alarm off. I pressed every button on that thing, but to no avail. I eventually read the instruction booklet wherein I understood that the alarm stops when the air quality is safe. I should have read that sooner! I then shoved the monitor under a pillow and rushed outside. I had no headache and wasn’t dizzy. I will survive! Thank God I bought that thing! When I got back inside, I noticed that the fire had only just died as the wood burner was still warm and there was no smoke in my house…

I decided to go back to bed, lay staring at the ceiling for a while and eventually I fell asleep.

A couple of Facebook followers advised me to contact a chimney sweep, which I did, even though I had only used the stove since October. Dirk from Schoorsteenveegbedrijf Brouwer arrived the same day to check my wood burner and chimney. There was nothing wrong with the wood burner, but there was no draft. Dirk climbed the ladder to check the chimney and saw what the problem was. I have an anti-bird mesh cowl in my chimney, and it was covered in soot. No wonder I had no draft. 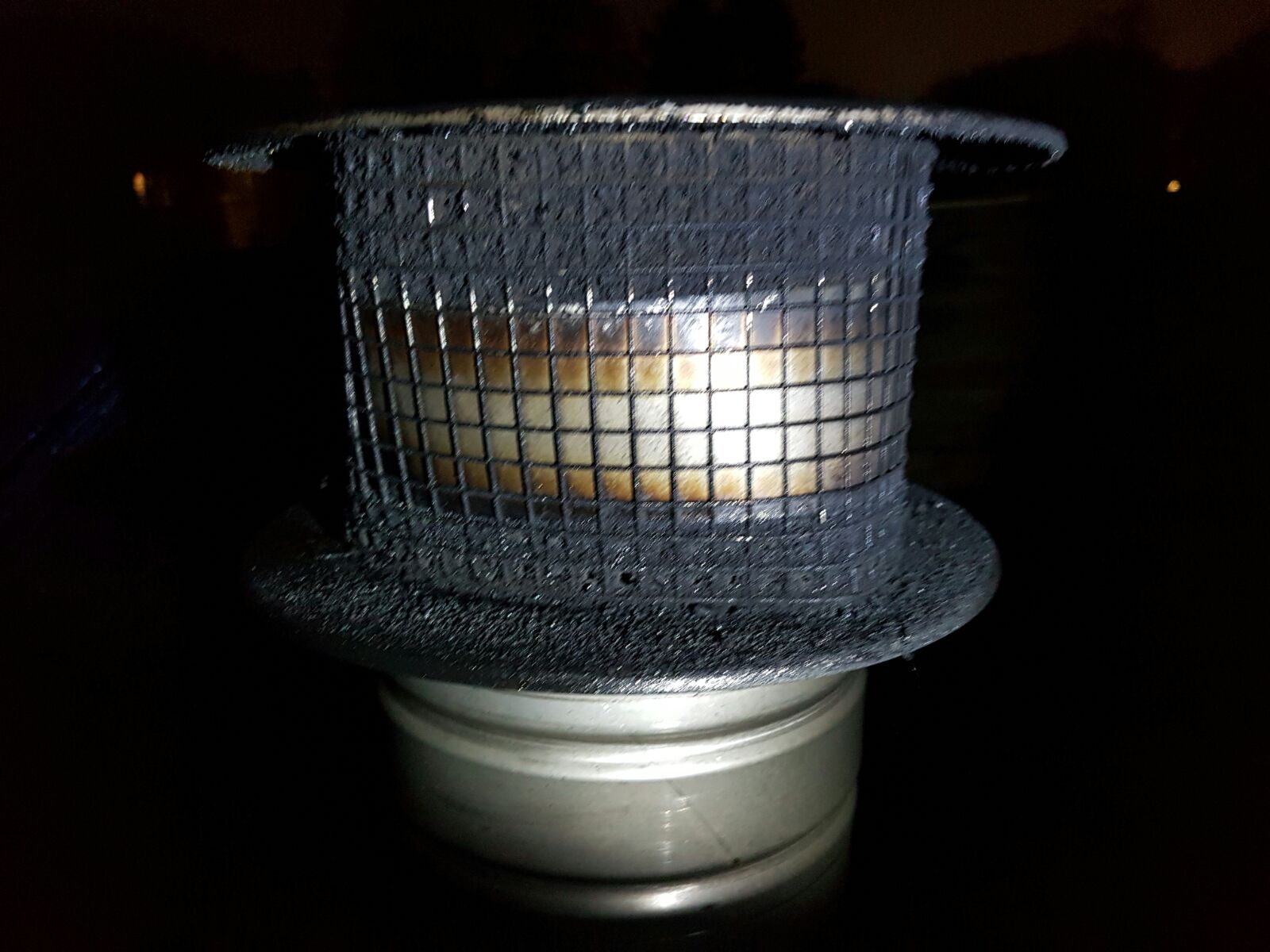 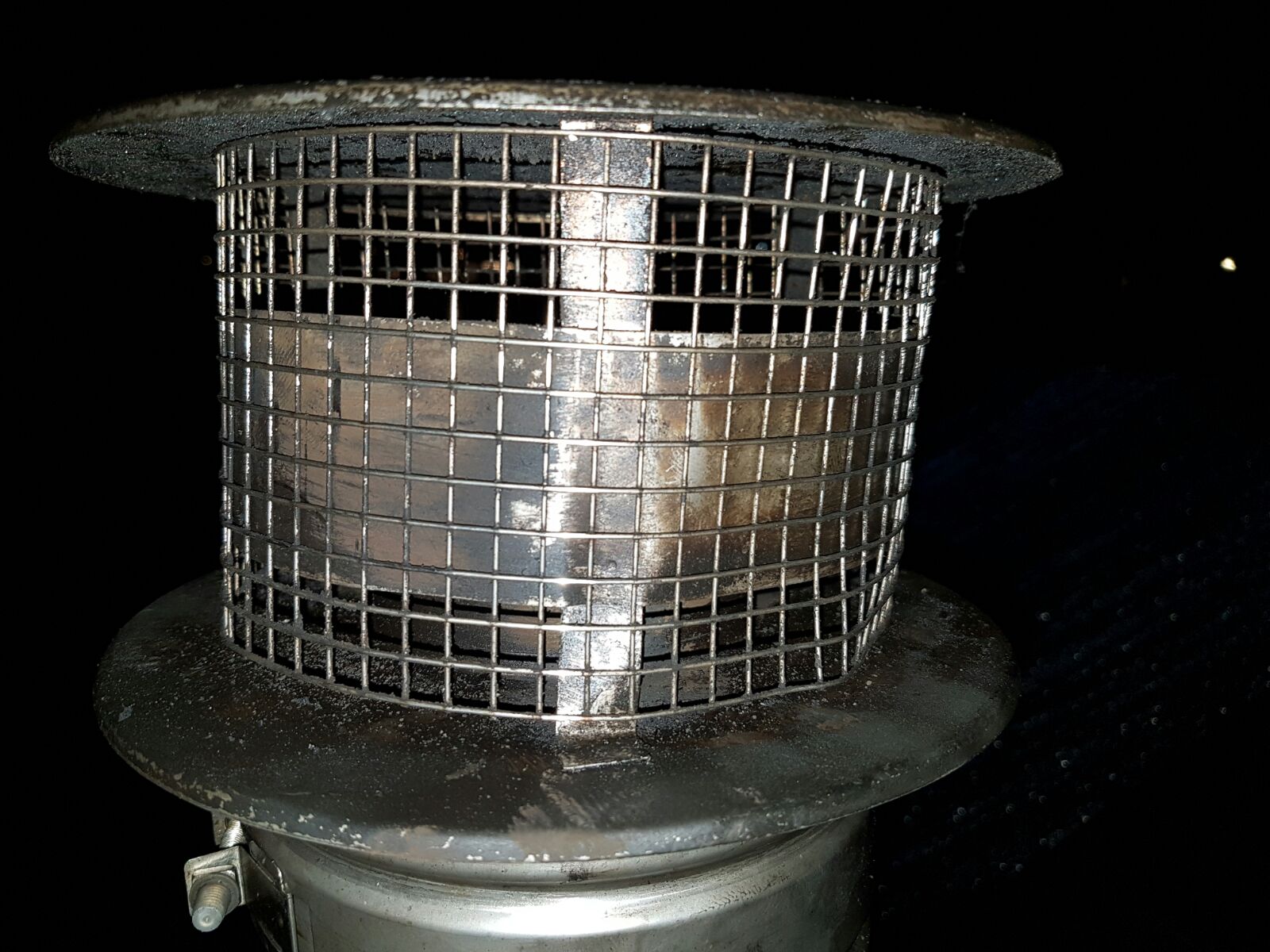 He advised me to make my fire hotter. If you burn the fire hotter there will be fewer black tar deposits in the flue. I have a thermometer on my chimney pipe which indicates when the fire has reached the correct temperature for optimal combustion. If I stick to that temperature, I shouldn’t have the problem again. Dirk says that the problem was not caused by the briquettes I use as they are especially made for the purpose, and he should know because he is also a fireman. That is a handy job combination! 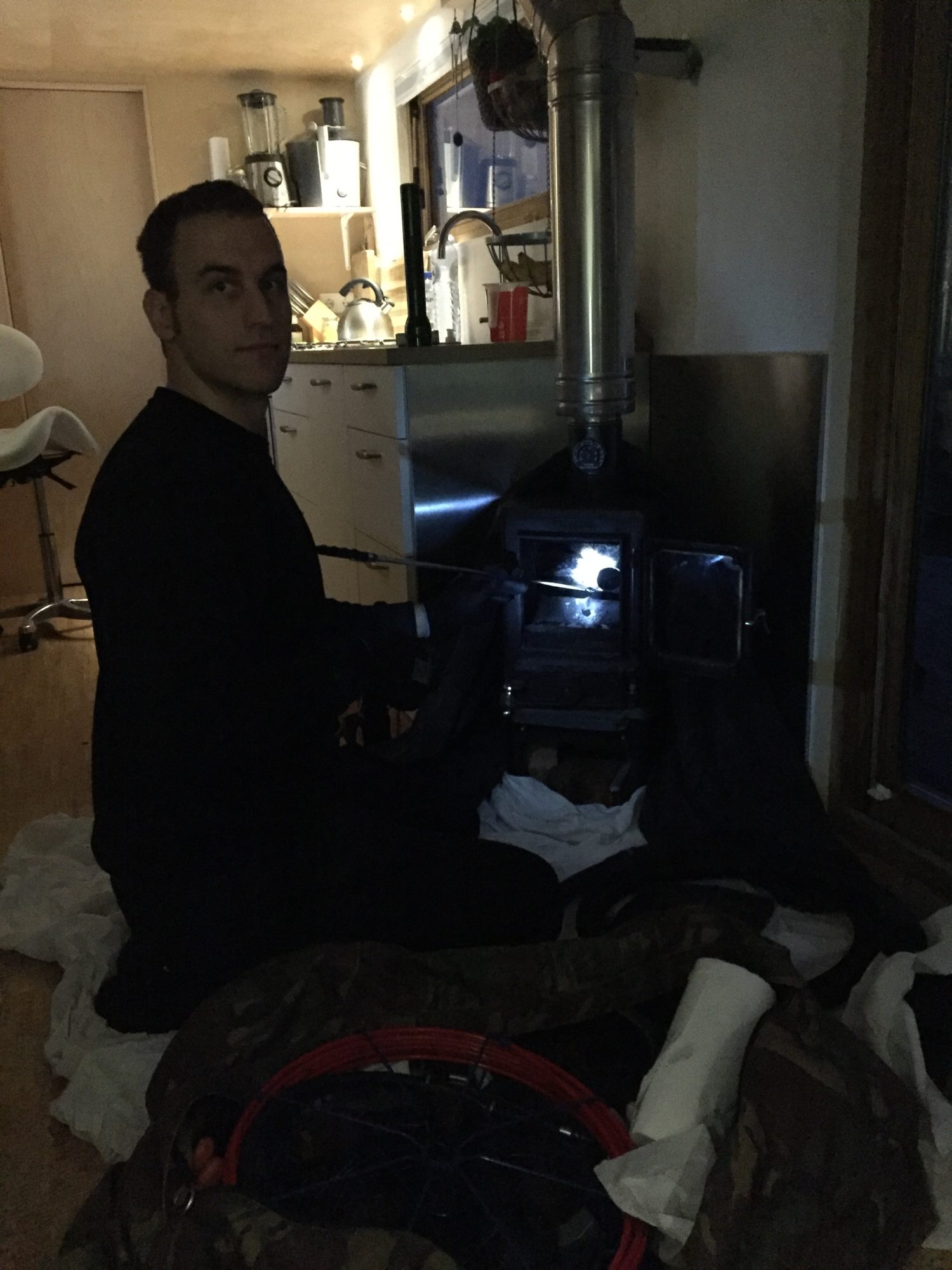 I now know that building a fire in a wood-burning stove is a skill you need to learn. Dimka was here last Monday to place a ventilation grid in the bathroom and kindly showed me how to build a fire. I’m learning new skills every day! 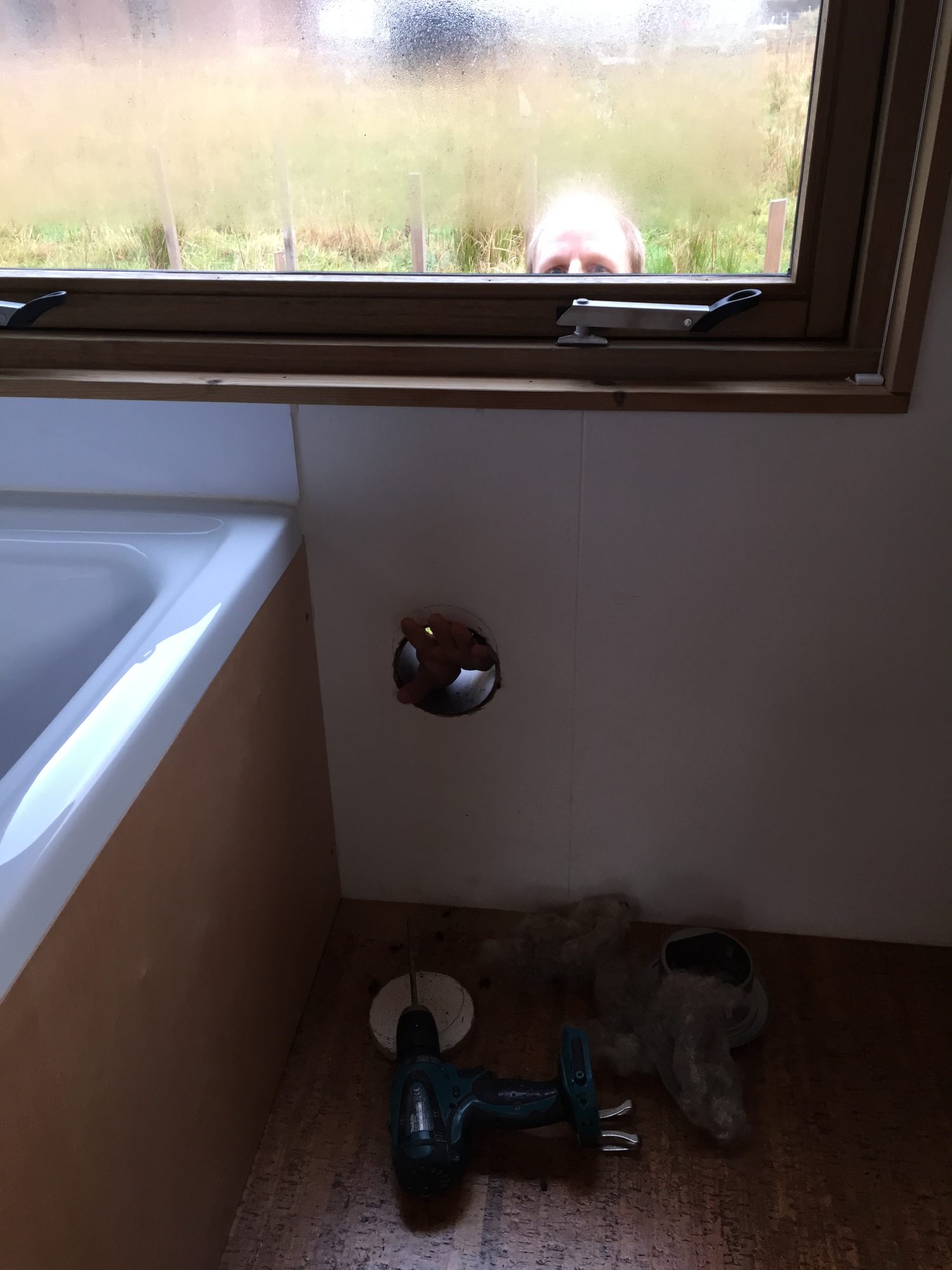 The fire now has a good draft but Dimka thinks it will work more efficiently if the chimney were half a meter higher. The chimney is now as high as the roof, and if it was a little higher it would work better. I now know that I need to clean the mesh cowl if it gets full of soot again. It is possible to replace it with a coarser mesh, but to remove the mesh totally is not a good idea, Boy said. Not only because of the birds, but the mesh also traps flying sparks.

All’s well that ends well and it is warm and cosy again in my lovely home. 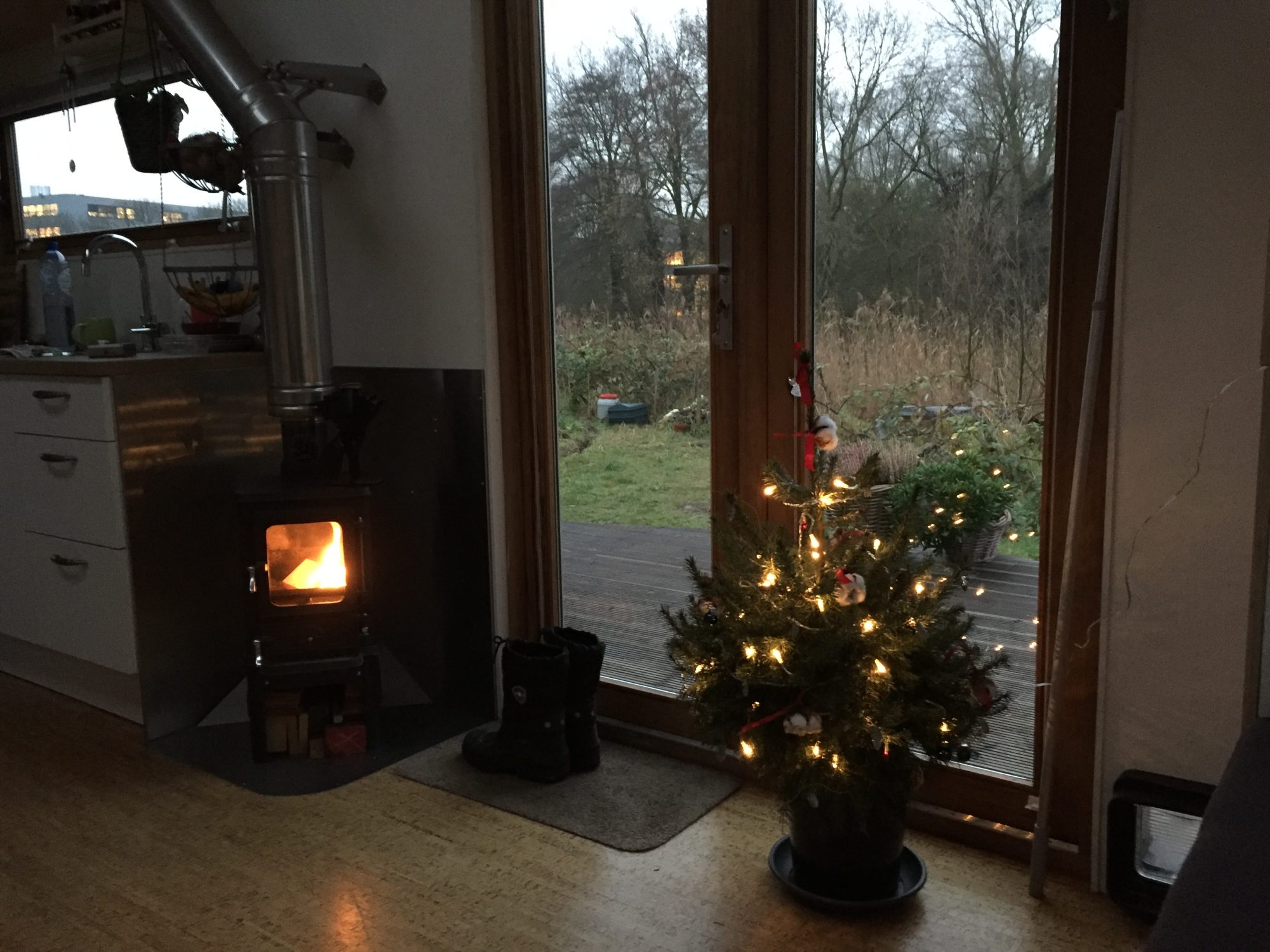