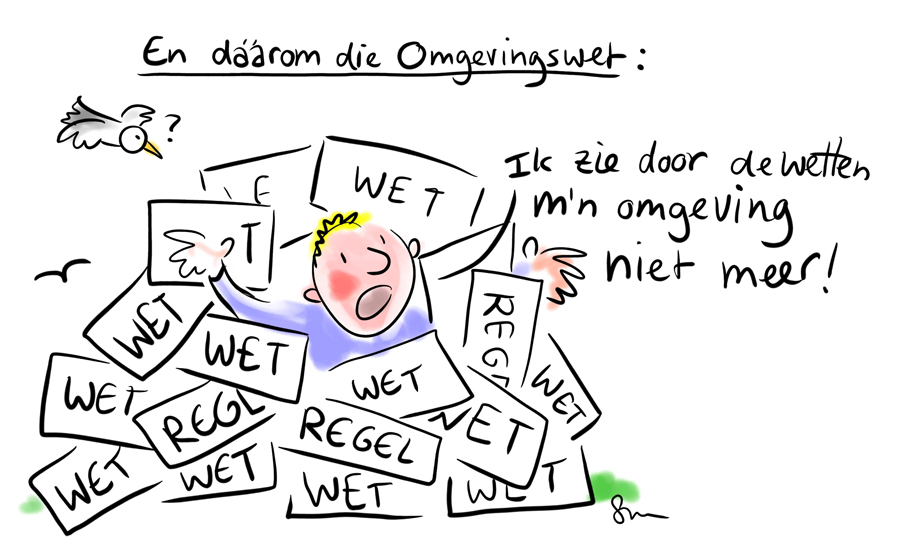 The Environmental Law will be expected to take effect in 2021 and is designed to simplify and merge the rules concerning spatial development. Municipalities will have more freedom to decide how they wish to use their space. The motto is ‘Room for development, warranting quality’. But, as is written down in the description of the DuurzaamDoor clinic: ‘Without successful societal initiative and a flourishing citizens movement, the environmental law won’t work as intended.’ The clinic was a kick-off for a series of meetings and sessions in 2018, as organized by DuurzaamDoor. In the meeting it became obvious that it’s necessary to have joint brainstorming sessions about this topic.

Towards a new society

Co Verdaas is one of the founders of the Environmental Law and told us about the background of this new law, the intention of which is to create opportunities instead of telling people what to do. According to Co, our current governmental system is starting to implode and we are at a crossroads. The relations between citizens, government and society need to be revalued.  Citizens need to change as much as our government has to: we need to work together. Our government has decided we are shifting from a welfare state to a participation society, but that’s easier said than done. Apparently, both (local) politicians and citizens need to learn how to participate.

Citizens initiatives in the Netherlands

There are about 20,000 solid citizens’ initiatives in the Netherlands. Most likely there are far much more than this, but not every initiative is registered at organizations like GreenWish or MEAX which support these initiatives. These initiatives are started by active citizens with an intention to change things in society and need room from the government to do so. Room in legislation and also actual physical room to execute their ideas.

When I look at bottom-up Tiny House initiatives, I see a lot of room for improvement in the cooperation between local governments and initiators. What are the difficulties? Here’s my vision:

Clear and transparent communication is important when a group of citizens contacts the municipality for space to start a Tiny House living project. Consider the group an equal partner and don’t withhold relevant information. From experience, municipalities sometimes tend to embrace a citizens’ initiative only to prescribe how it needs to be executed. That, of course, isn’t the idea behind participation. The municipality needs to facilitate and communicate with the initiators, in order to create room for the project within existing possibilities and legislation, considering all interests. Talk to each other, what exactly do they want? How do they want to live? Don’t just fill in the blanks, but keep asking.

Communication with stakeholders like the local residents of a desired location is very important. Include them as early as possible and make sure everything is clear for all parties involved. What is the exact plan? Which objections might arise and can these be solved? Are these objections fair? It’s also important that there’s a budget available to facilitate these participating citizens, since it takes a lot of time and perseverance to start up a citizens’ initiative. These initiatives have added value for society and increase the amount of knowledge and know-how. It makes sense to reward or at least compensate these people for their efforts. It’s a new way of working for municipalities: hiring private initiators as experts. It became clear from the discussions at the clinic that there’s fear within existing organizations that these active participating citizens will take over (part of) their job. It’s a new way of thinking and acting, and we all need to embrace it. 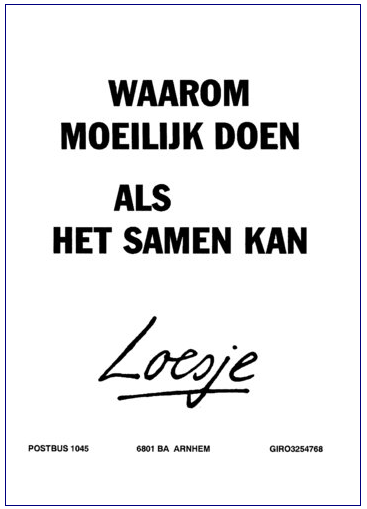 Participation is a two-way street. Citizens need to learn this just as much as politicians do. You can’t expect to walk up to the municipality and have them take care of everything. ‘Please open up the Tiny House drawer and hand me a plot on which to park my house, please.’ You want something from the municipality but you also have to offer them something: be a solution to the problem they are faced with. You need to have an open attitude and be prepared to work together. You need to think about what exactly you are asking. Clear communication, keeping the position of the municipality in mind and sharing relevant information. Take time and be patient, don’t expect it to be done by tomorrow.

And in general: stop complaining. If that’s all you can do, when you’re not willing to take the action needed for positive, constructive change, then you’re not participating. Tips for initiators: talk to other initiative groups. Take the involved public officials to visit a successful project and show them you’re not asking for something impossible. Register at organizations such as GreenWish and MEAX, they can help you strengthen your project. And register your initiative at the Tiny House Nederland foundation.

What do you mean?

Language is a big part of the communication between municipalities and initiators: both speak a different language. We would benefit so much from ‘intermediates’. They should be people that are not connected to the municipality or initiators, and they can establish a bridge between the two parties. They should have a good overview, know where to find people and resources to help an initiative move forward. They could act as translator for municipalities and initiators.

Open and equal communication is key in citizen participation, if you ask me. And: we need be willing to grant each other some room. I’m saying this because at some potential locations for Tiny Houses the local residents are so eager to fight for their rights that they reject the Tiny Houses and their residents in advance. Even before they even know what they’re rejecting. So, clear conception is the other key. The average person doesn’t have a clear picture of what a Tiny House is (or isn’t), who the people are that chose to live like this. Fear is grounds for resistance, which can only be eradicated when people are heard and have a clear image of what’s going on and what the possible consequences might be for their own living enjoyment. It’s essential that all involved parties can acknowledge the value offered by Tiny House living projects and rise above the prejudice. Together we can accomplish so much, but participation doesn’t happen automatically. Maybe we’ve unlearned how to do that, in our individualistic society. But it’s a fact that there’s a need for more togetherness. And we can learn to participate!

A hot item Preparation is key