In the meantime, three Tiny Houses are already placed at our little piece of paradise in Alkmaar. It’s a lot of fun! Three houses that are each inhabited by one person. We are living off-grid so aren’t connected to any public utilities. Marloes arrived in late March and Marja in late April. We haven’t had much rain since then, so their new water tanks have hardly got any water in them. So off they went with jerry cans! My own 900 liter water tank went completely dry this week. But we’ve gotten some helping hands: the fire department of Alkmaar helped us out! 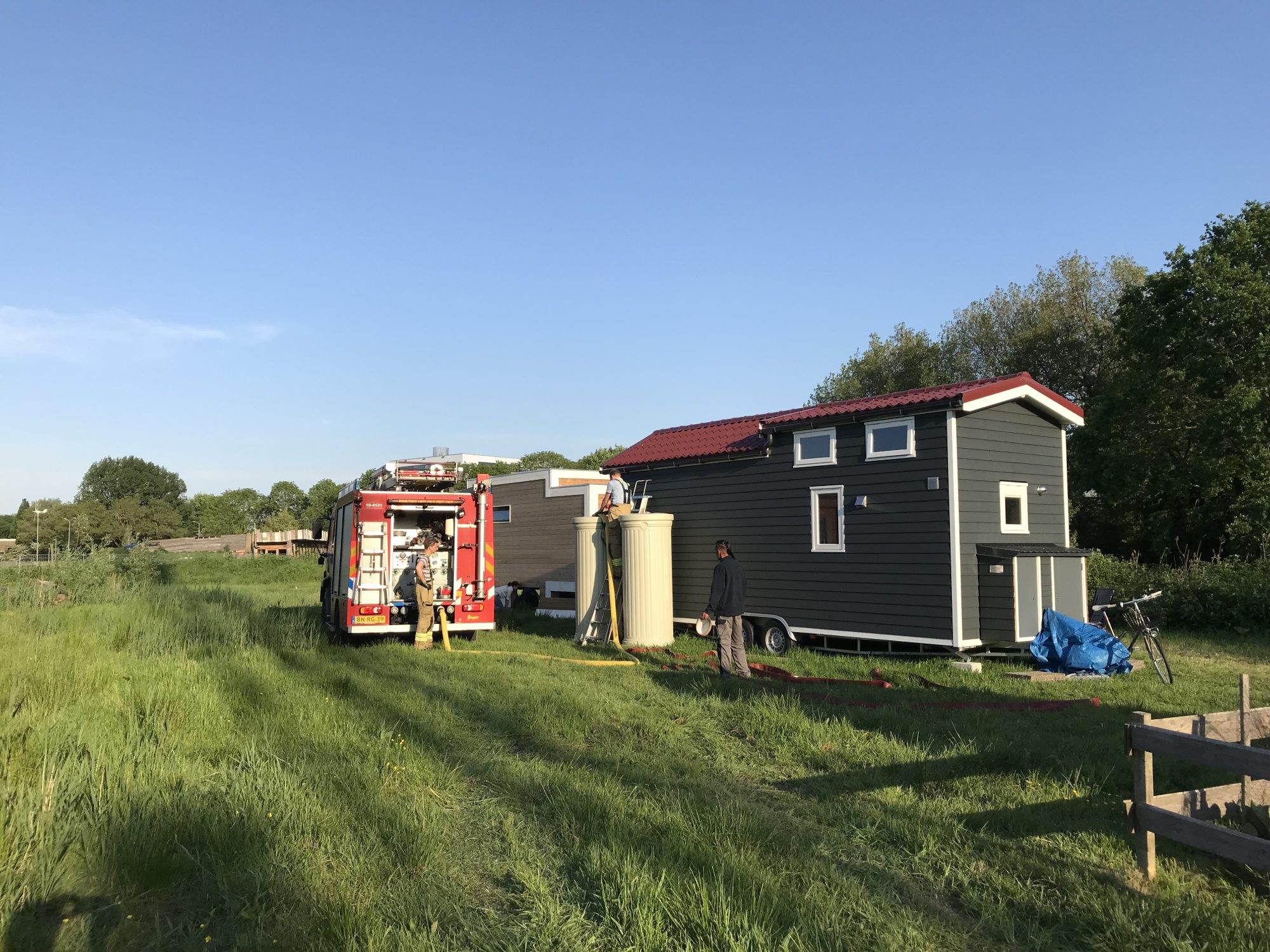 When you’re living off-grid, you have to get by with whatever nature gives you. That means being thrifty with electricity in winter, and with water in spring and summer. I’ve lived in my Tiny House for nearly two years and this is the second time I’ve run out of water. Not so bad, right? Both times it happened in spring – apparently there’s not a lot of rain in Alkmaar in April and May. Although there’s plenty of rain elsewhere, it just seems to pass us by. A 900 liter water tank isn’t that much though; you would need at least 2000 liters of water storage. That’s why this Monday my dad surprised me with a brand new IBC tank of 1000 liter, the sweetheart! But still, it’s not going to rain any time soon, so this doesn’t solve the water issues right now.

I had to watch Marloes and Marja dragging jerry cans for days. That’s ok if it doesn’t last for more than a few days. Boiling water to do the dishes, showering at a friend’s place, washing your hands with a measuring cup of water on the counter…it was time we called for help. Unfortunately, it’s not customary in the Netherlands to have large amounts of water delivered. I asked for a price from a company in Belgium, but it was incredibly expensive. Wouldn’t the fire department want to help us out just this once? If I explain to them what it’s for – not for luxury but for the basic needs around the house: washing, drinking, showering? A few months ago I talked to a fireman at the supermarket downtown and asked him if I could ask them for help if there were to be a shortage and dry weather again in the future. He told me to just give it a try and that it wouldn’t hurt to ask. So I took the plunge (sort of) and sent them a message explaining the situation. Very soon I got an answer from Koen Janse de Jonge. I was so excited to read they were willing to help us out just this once. Fantastic!

On Tuesday evening voluntary firemen Andre Zaad and Robin Zijp came to us with a big truck full of water and filled up our tanks with smiles on their faces. They needed to refill the trucks in between, but what a blast! The hoses were rolled out and the tanks were filled with clean drinking water. What a great guys! Of course we understand that the fire department is not meant for this kind of thing, that’s why we are extra thankful that they were willing to make an exception. We’ll be very thrifty with our water. Marja has 2000 liter capacity, but one of her tanks wasn’t hadn’t been connected yet and couldn’t be filled. Marloes has 1200 liter storage under her house, and I’ve got 2 1000 liter IBC tanks with a spillover so I think they can hold 1800 liter. That should get us a long way and I’m sure it will rain again someday soon. We even got to sit inside the firetruck and they explained all the equipment on board!

Thank you so much, dear firemen from fire department Alkmaar. You’re our heroes! Our (water)saving angels! You’ve made us very, very happy and showed that there are organisations that do believe in helping each other and working together. You’re the best!

Honor thy neighbors Learn how to make your dream come true