Although we’ve barely had any winter so far, I’m already longing for spring. Even more so now that I’m lacking running water because my water pipe has been frozen solid for a week. Showering isn’t a big problem; I just take a shower at a friend’s every now and then. But having to use a jerry can with water every time you want to wash your hands or some vegetables is really unpractical. And putting on a kettle for the dishes takes a lot more time than just opening the faucet. One thing’s for sure, you become really aware of the amount of water you use!

And that’s a good thing too, because we use a lot of water in our…water land. Not surprisingly, because the quality of our water is excellent and it’s not that expensive. Why would you be frugal when the water is coming out of your faucet in an endless supply? There’s more than enough water in the Netherlands, right? Well, yes, but that doesn’t mean we should be so careless with it. Maybe it’s time we take a look at the bigger picture.

In my Tiny House I use these amounts of water per week, on average:

That’s about 33 liters a day. That’s a whole lot less than the national average of 133.4 liters. But why would you be frugal with water? It rains all the time, right? Well, not so much this last year, I can tell you. Try living off the grid when there’s been no rain for two months ;) But, that’s not the reason why its sensible to be frugal with water. It’s mainly a social reason. 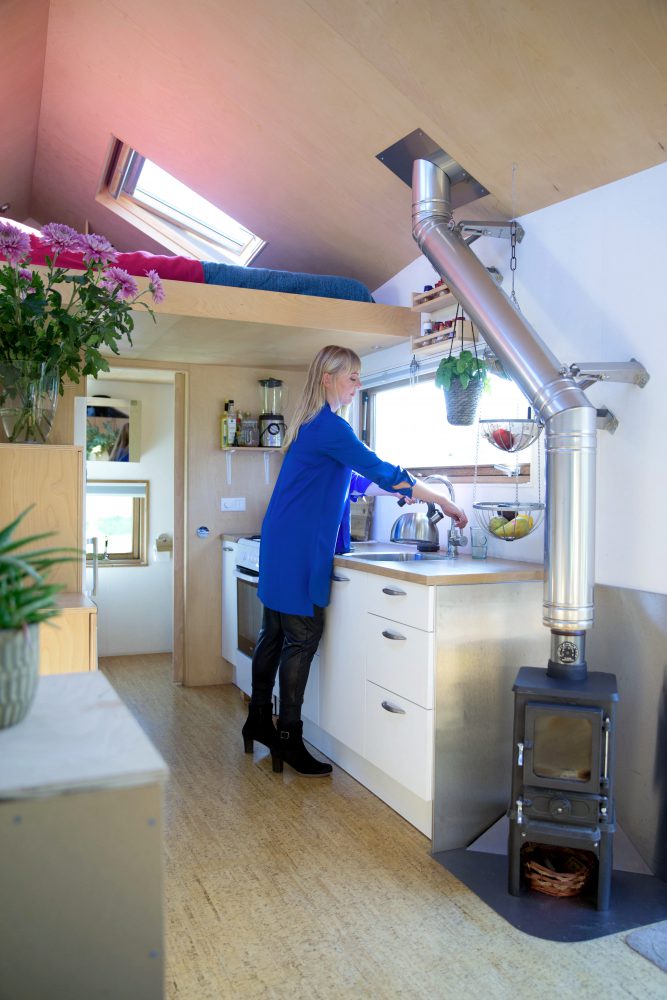 The world population is growing. All these people need water to drink – sweet water, that is (salt water isn’t suitable for drinking). According to the National Waterplan, the demand for sweet water is already bigger than the supply at certain times, and this will happen more often because of climate change, salination and socioeconomic developments like population growth and economic growth (source: Infomil). So even in the Netherlands, drinking water is becoming more scarce. But that’s nothing compared to the situation in other countries. In South-Africa – Capetown, for example – people are dreading the upcoming Day Zero: the day that water is no longer limitlessly available.  Because of extended periods of drought, the worst since time immemorial, Day Zero will happen sometime this year. The people of Capetown will have to bring a jerry can to a tapping point and there they’ll receive their ration for that day. Showering for over two minutes duration is long since a no-go in Capetown.

‘No big city has ever had to organise a Day Zero during peace time. Capetown would be the first.’

Makes you think, doesn’t it?

According to Wikipedia, already a third of the world population has to deal with water scarcity and this will be one of the main themes for the 21st century. More people drinking water and consuming goods that use a lot of water for their production. (Did you know that production of one t-shirt costs 2700 liters of water?) A warmer climate causes the need for more cooling water and irrigation water. Deforestation, wasting water and water pollution all cause a lesser supply of clean sweet water.

Maybe you don’t care that water scarcity is increasing worldwide when we still have enough drinking water in the Netherlands. So let’s bring in another argument to lessen your use of water. purifying polluted water to the point that it becomes drinkable (again) takes energy, and a lot of it. And with more people contributing to the pollution of this water, the more energy it takes. Hopefully we all know by now that we need to be frugal with energy. After all, real clean energy is scarce, most of it comes from coal or gas. To make our water safe for drinking, chemicals are used to purify it, and those chemicals harm the environment. It also costs money that can be spent in better ways, for example on the development of clean energy production methods.

What can you do?

Being aware of the fact that we need to be cautious with our water is the first step. Is it really necessary to leave the water running while brushing your teeth? Maybe you can shower less, or every other day instead of every day? Your skin will thank you for it, trust me. There’s no need to shower every day, you’re not ‘dirty’ if you don’t. If you want, you can flush your toilet with rain water. You can have an even bigger impact by consuming less goods that use a lot of water for production. Take that t-shirt for example. A t-shirt form a price fighter doesn’t last nearly as long as a quality shirt from organic cotton. You pay more for this last one, but that might make you be less careless with it. By choosing products that last longer you save a lot of water. Eat less meat, a single hamburger is good for the use of 2400 liters of water during its production.

You could install a water saving showerhead and there are even water saving attachments for the faucet in the kitchen. Now you might think: if the industry doesn’t do anything to save water, all my actions are for naught. But you should realise the power we have as consumers. If we care about saving water and act and buy accordingly, than the industry has no choice but to follow. Honestly, every bit helps. I’m a firm believer in the Dutch saying: ‘verbeter de wereld, begin bij jezelf’ which translates to: ‘improve the world, starting with yourself’. Together we can create a ripple effect of awareness and inspiration. Are you with me?