It’s done. I’ve moved. I’m homeless. I’m living with my mother again. What a strange idea! The past few days have been very intense, both physically and emotionally. I never thought it would be so much work, moving out of a Tiny House. But luckily, I had help from dear friends. And how great it is that I can temporarily live in the apartment next to my parental home. Thank you, Mom! 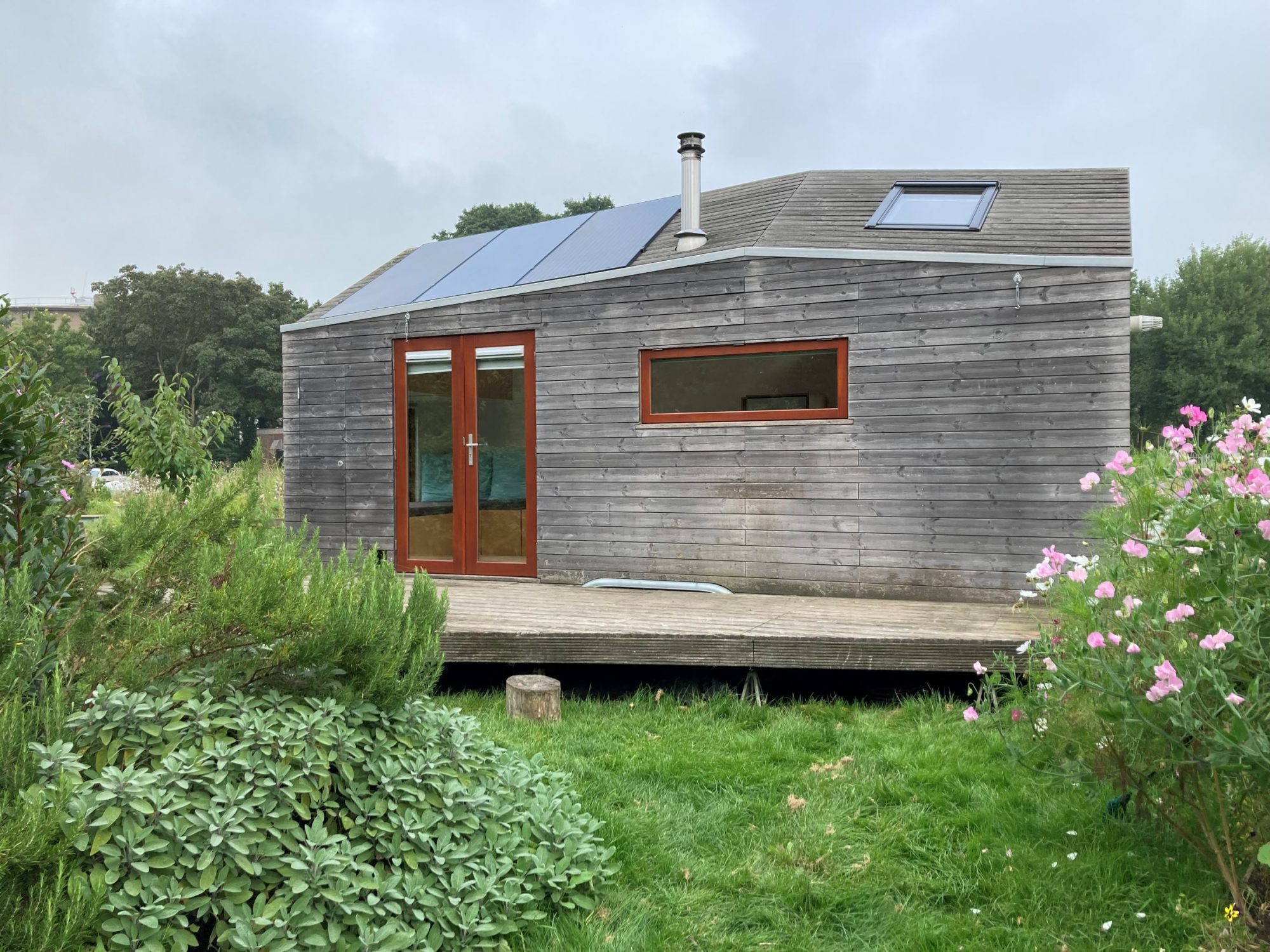 Saying goodbye to my first Tiny House was a kind of grieving process. Yes, of course I chose to sell this house, and yes, there will soon be a fantastic new Tiny House in its place. But that does not alter the fact that I have put my heart and soul into this first house and have shared joys and sorrows with it for five years. To me it’s not just a house; it has a soul. A piece of my soul maybe. Packing my things, clearing, and cleaning; it really felt like grieving. And that’s totally okay. To me it proves how much I love this little house. And that’s kind of a tribute to her. 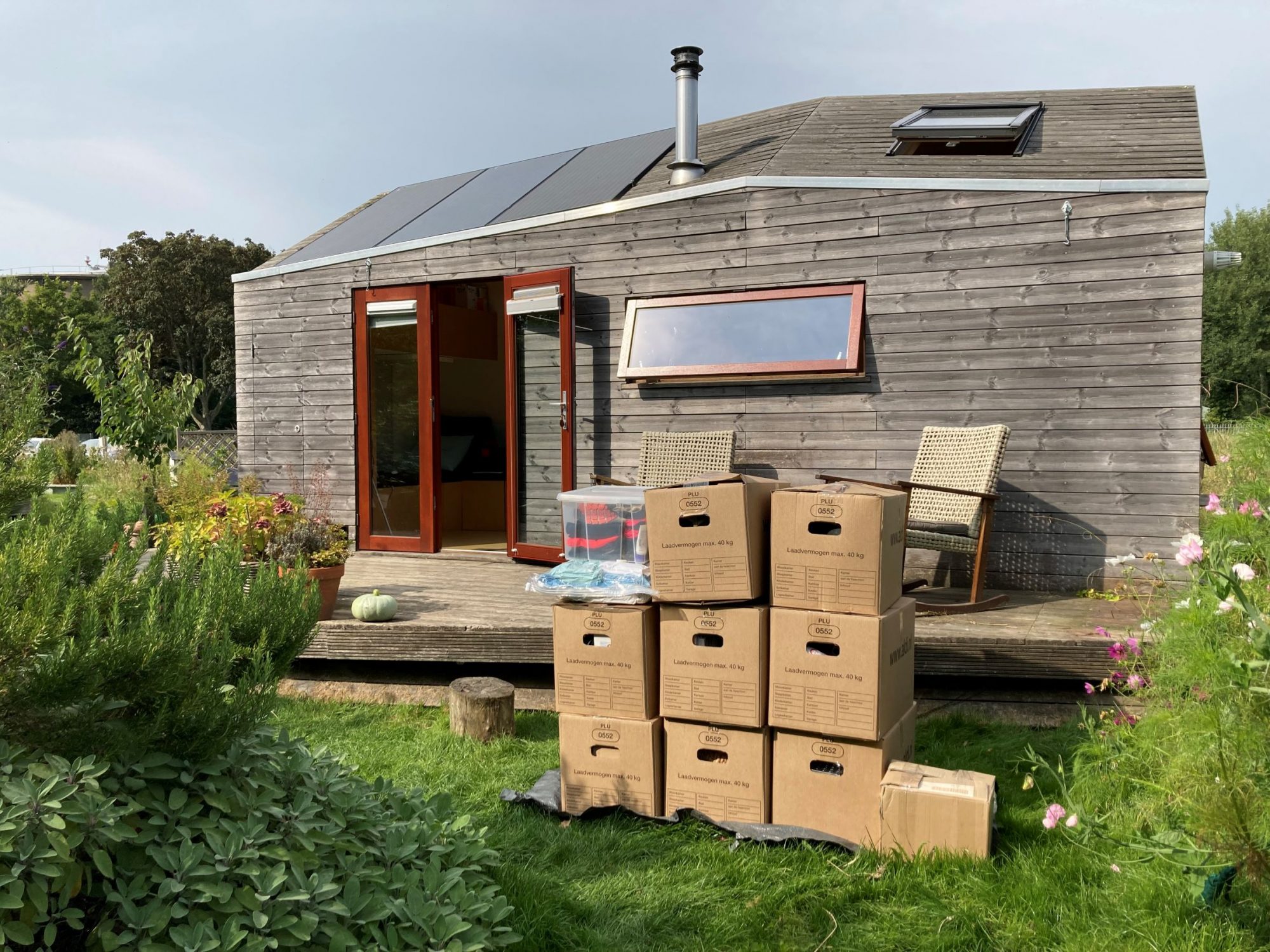 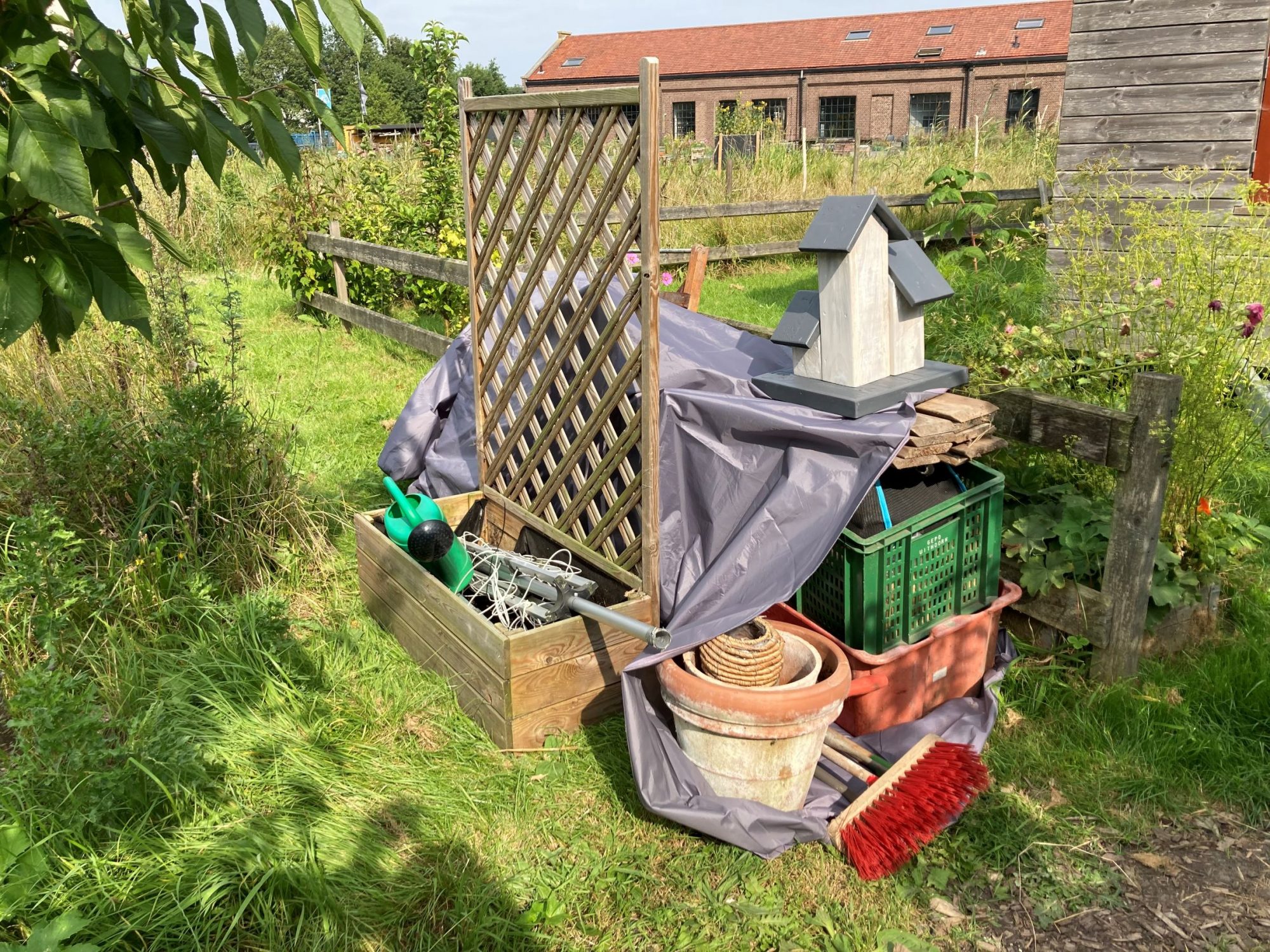 A lot of tears have flowed this past week. Saying goodbye to an era. Thinking back to all the adventures I’ve had here. Saying goodbye to the house, the place, the city. All the special people I’ve got to know and to whom I won’t say goodbye, of course, but will be less able to visit. They will be very welcome in Olst where I will be living in six months’ time, and they know it. And my dear neighbor Marloes, who has become much more than a neighbor. Our goodbyes are only very temporary, because soon we will be neighbors in Olst again. What a lovely thought! Until then, I will visit her to enjoy a nice dinner every now and then.

I am grateful for everything I was able to experience here. I am grateful to the municipality of Alkmaar that I have been able to live in this special place for more than five years. It took a lot of work to make that happen. Special thanks to Christian Braak for all his efforts to keep this Tiny House project going. Alkmaar will forever remain my city. 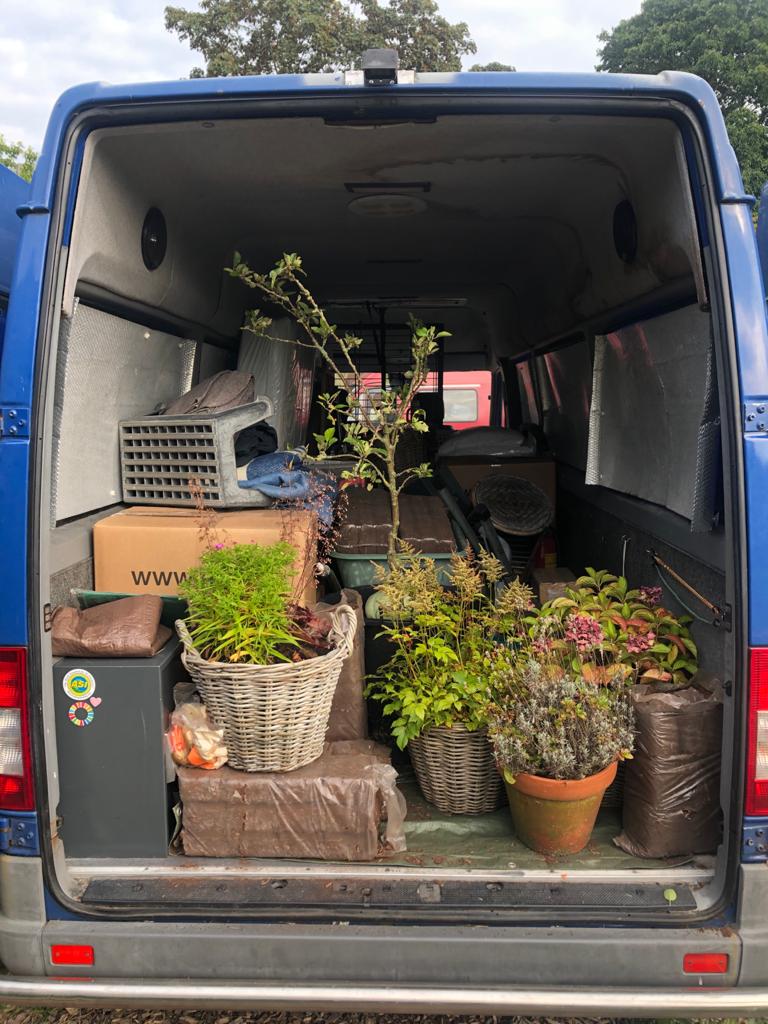 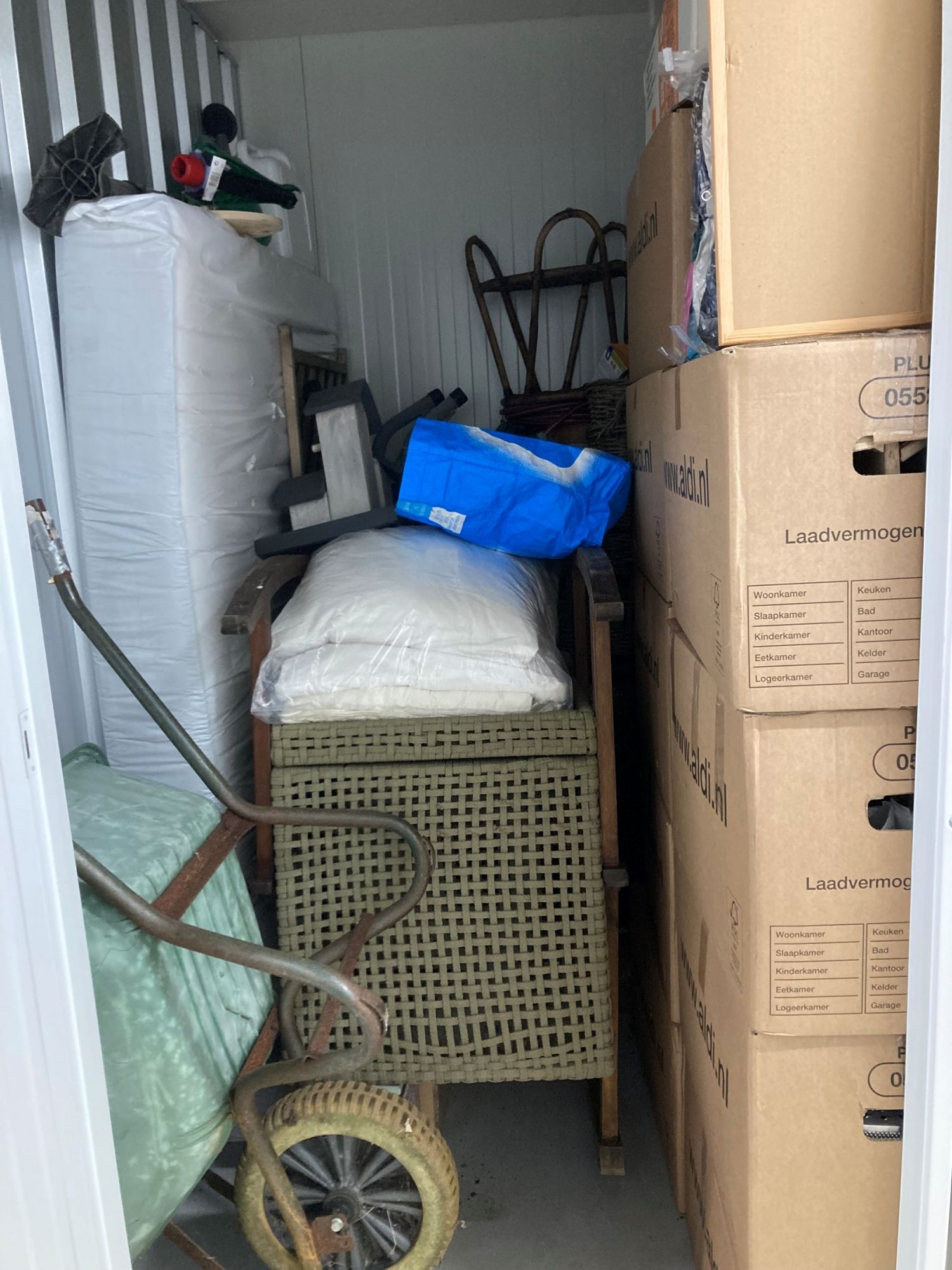 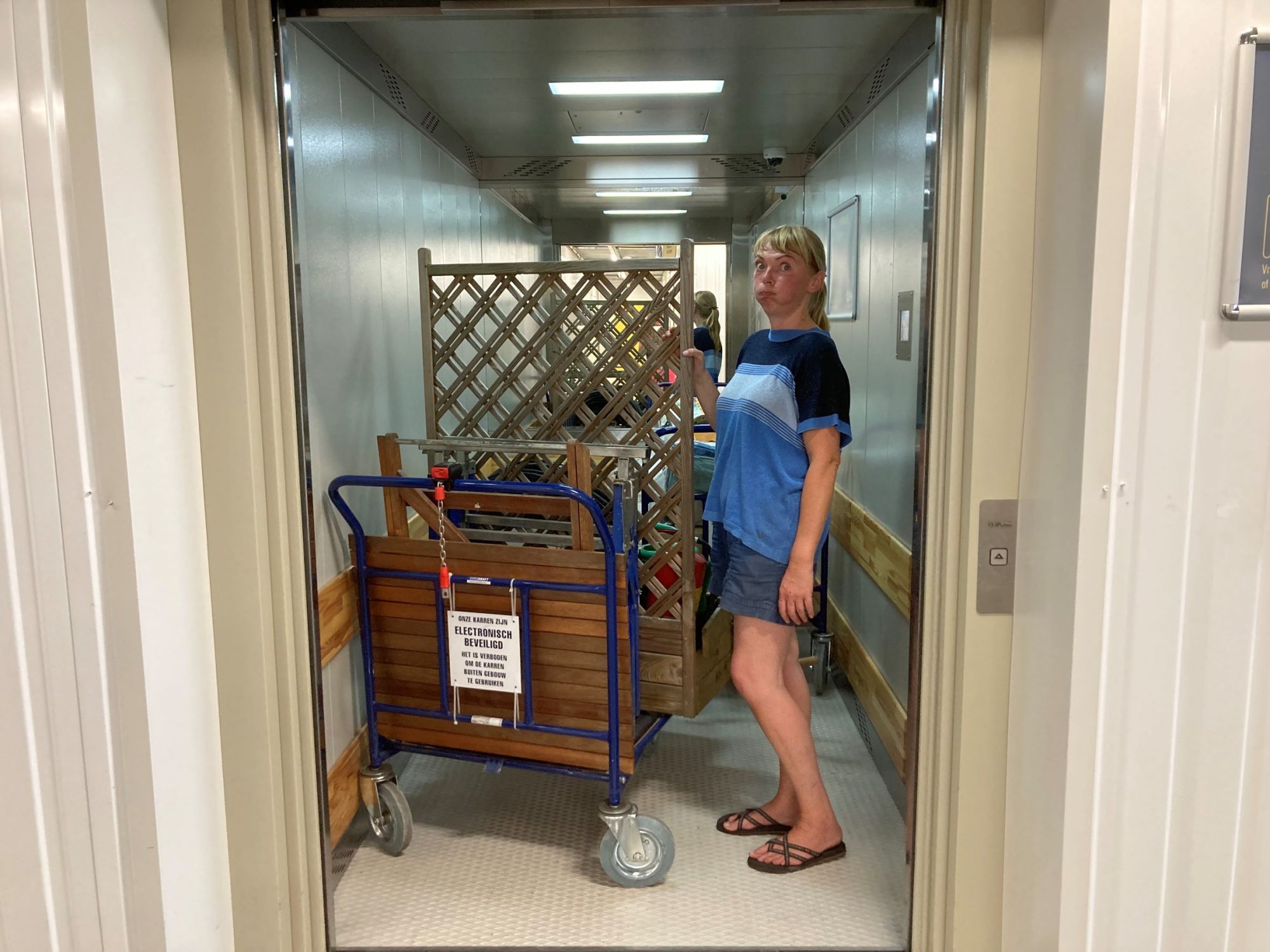 It’s amazing how much stuff comes out of such a Tiny House. And lots of outdoor stuff too! I have rented a 12 cubic meter storage space in Deventer and it is almost completely full. I counted 14 boxes of stuff, but it is mainly the outside things such as the rocking chairs, the garden stove, the planter with trellis and the wheelbarrow that take up a lot of space. Oh yes, and four boxes of firewood. ;) My dear friend Jennifer helped me to pack. And my dear friend Nanda was so generous to take a day off and drive me with my stuff in her El Kombi SUP bus to Deventer. In the sweltering heat. Wasn’t that nice… It was cool all August and, of course, in the week that I’m moving house we get tropical temperatures. But better that than rain. ;) Another sweet friend, Silvia, helped load up everything and brought my bike to Noord-Scharwoude. Thanks a million, sweethearts!! 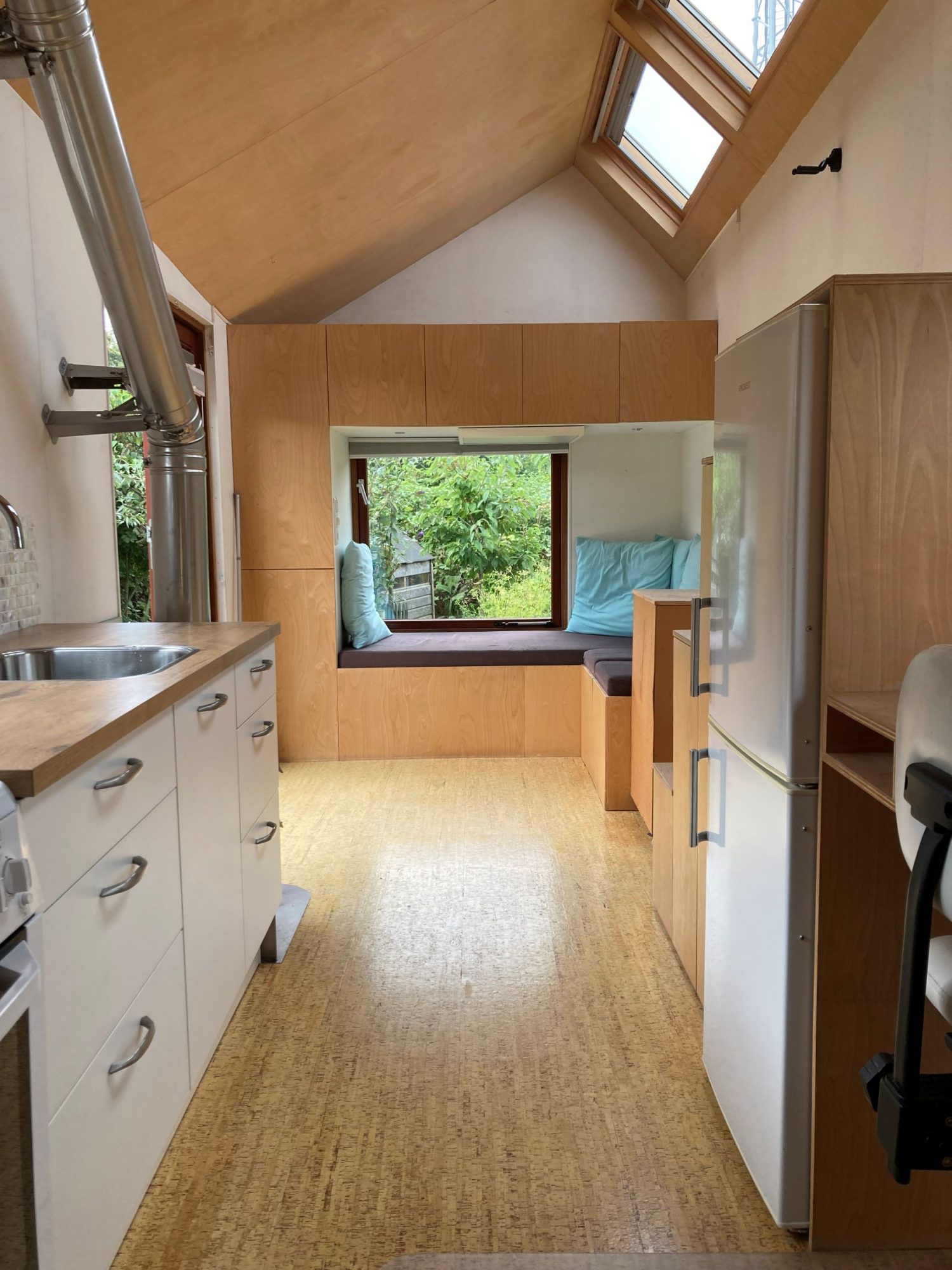 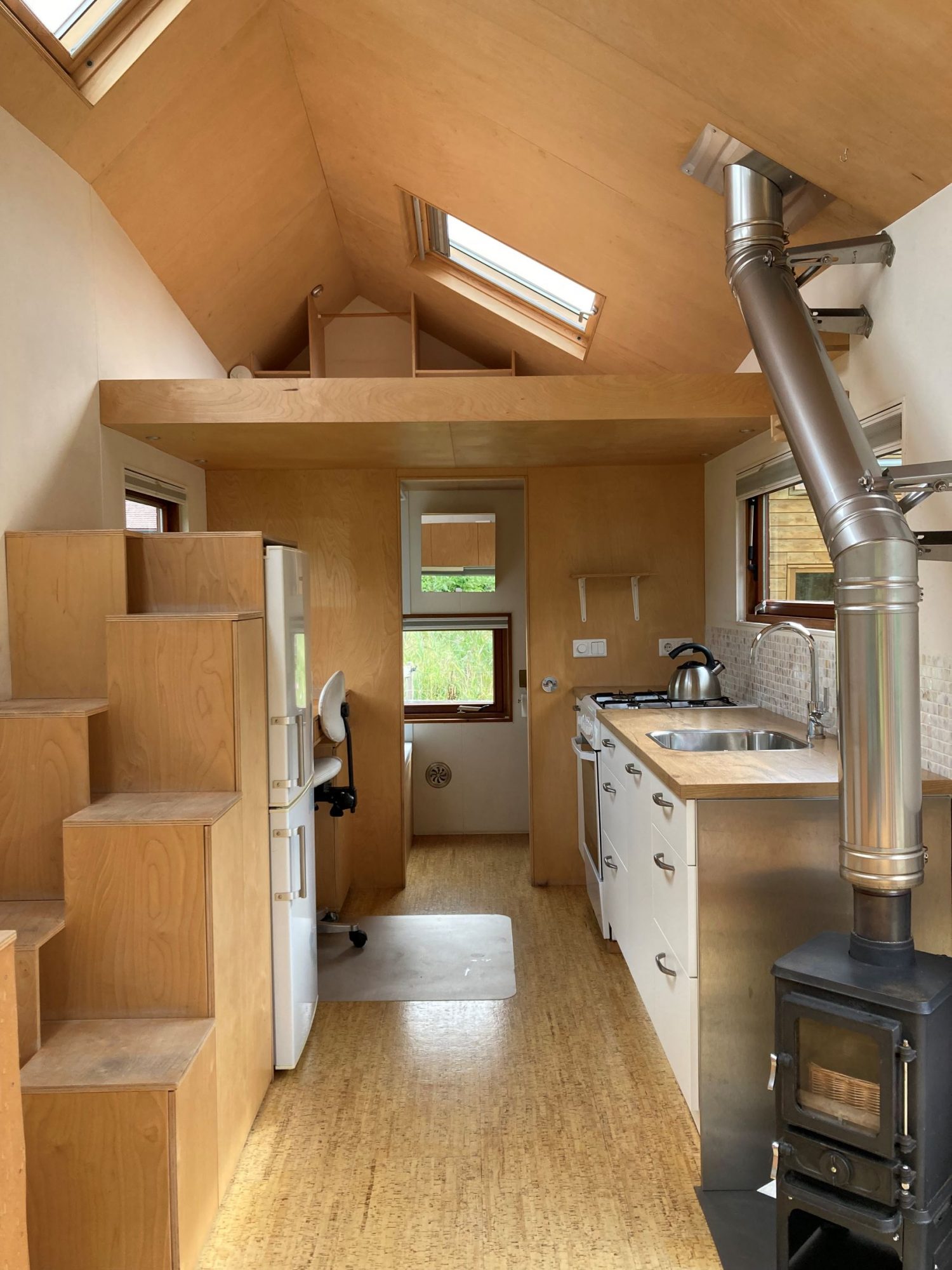 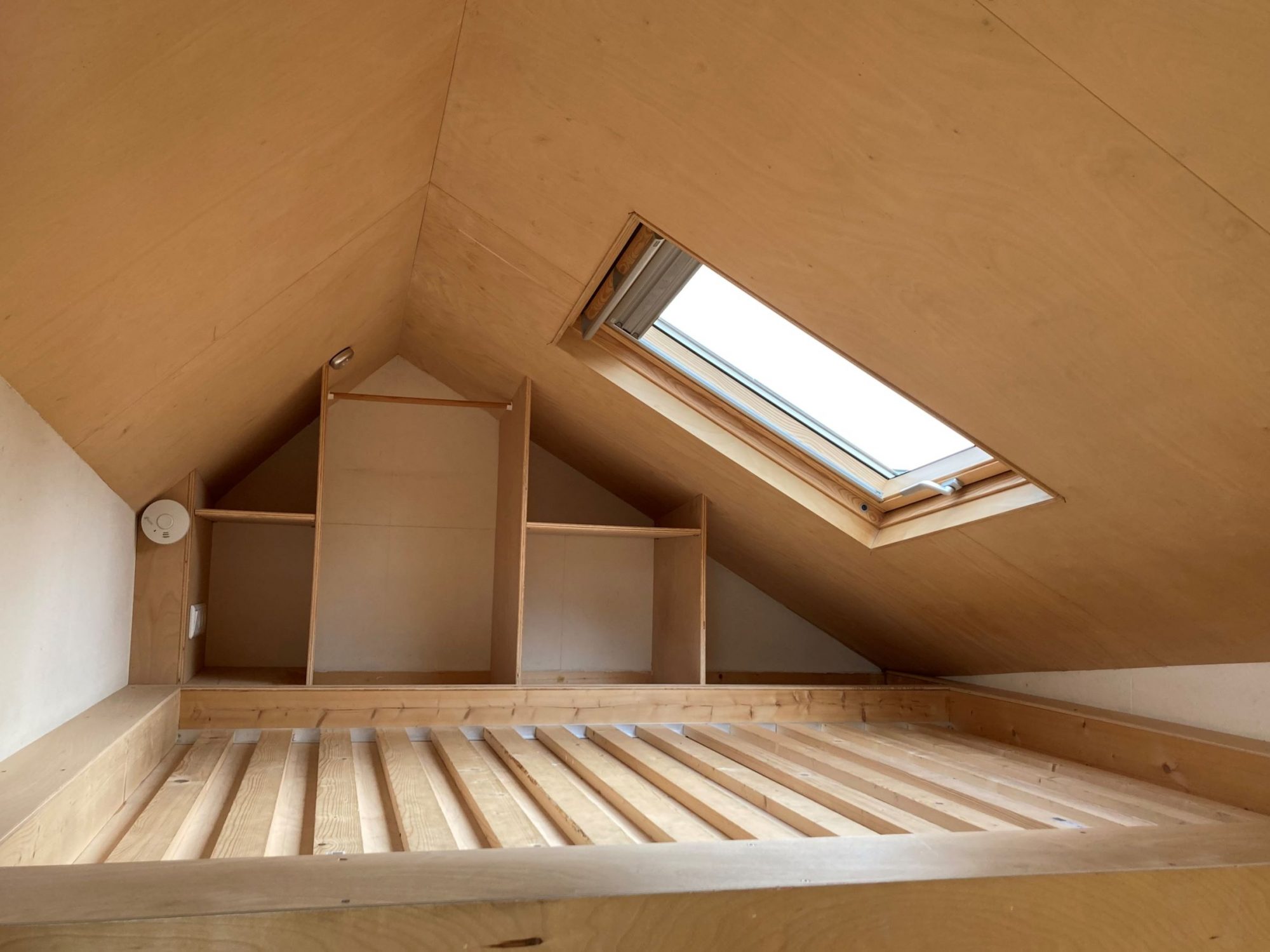 Yesterday I handed over my house to its new owner and that felt a whole lot better. I felt much lighter than in the previous days. Strangely enough, in the days before it felt like I was abandoning her, while I packed my things and she kept getting emptier. Washing up and leaving the space clean and empty at the end of the workday. But yesterday was a festive moment. Because now she has a new owner, who will have new adventures and experiences with her. And I’m sure she’s in good hands with him. A new chapter begins! Dear buyer, I wish you all the best in your new home. Thank you for letting me know that I’m always welcome to visit again. I really appreciate it! She will be picked up before October 1 and will move to Zuid-Holland. And then a new resident comes with his house to the Helderseweg number 28E. I also wish him great times living there.

I have been living in an apartment since Tuesday. It’s totally ok, but what a difference from my old house. So much darker! Hella has to stay inside for a while; she doesn’t like that at all. Well, she especially doesn’t like the fact that she has to go to the litter box now. Peeing is one thing, but she refused to poop. I even had to get a laxative from the vet because she still hadn’t pooped by Friday. That, in combination with an extra litter box made all the difference, and my goodness what a stench she produced. Hahaha! This is probably more info than you wanted. Sorry :P 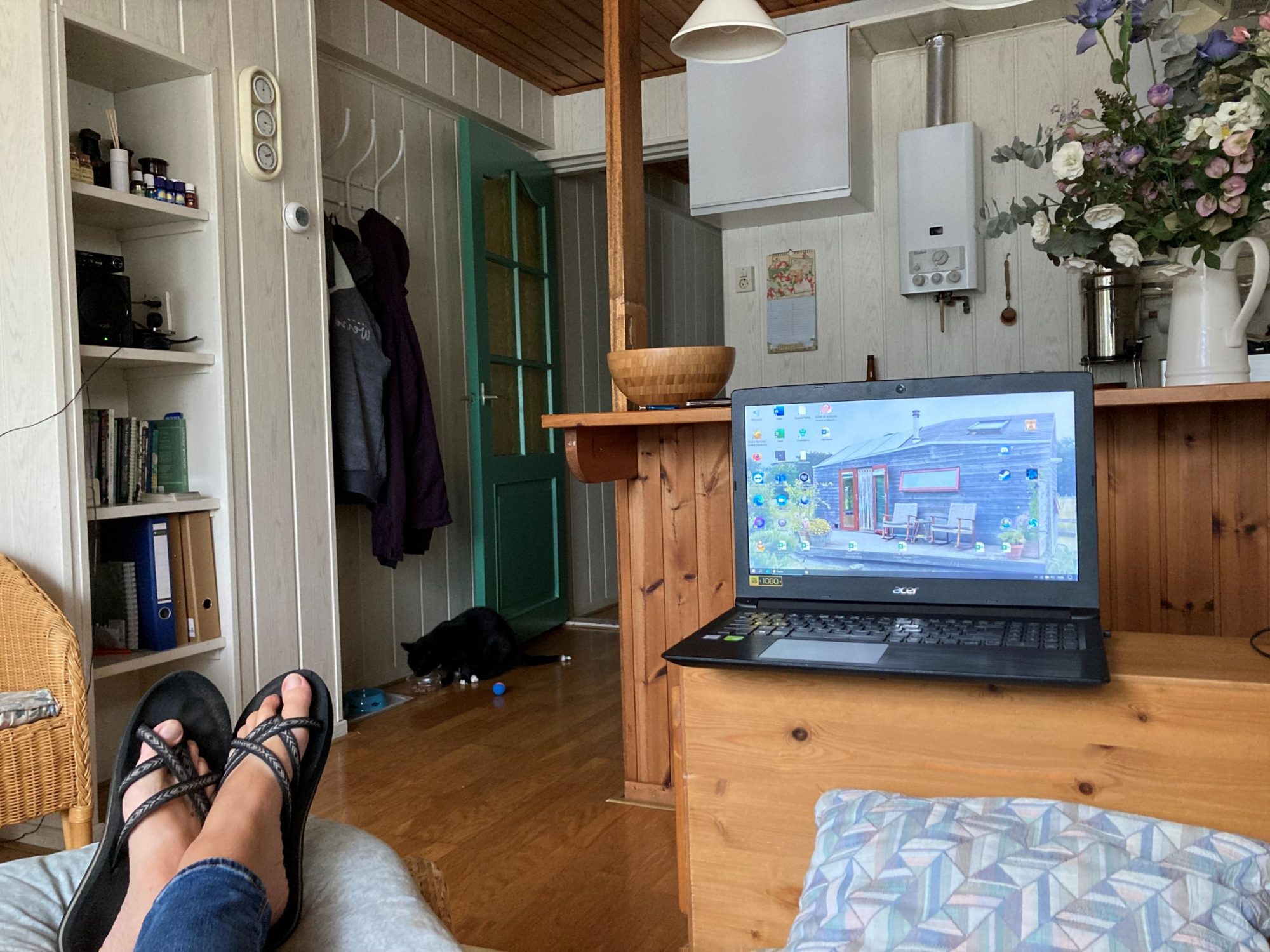 She will be allowed to go outside again in a while. It will all be fine, sweet little Hella. Until then, you’ll get extra snacks from me. I brought the chickens to Den Helder a week ago, where Bo and Annemiek are very happy to look after them. I have had a new coop built and a true paradise has been created for them in the Tiny House garden in the Falga Gardens where Bo and Annemiek live. Apparently, they are having a great time, because two days later the first egg had already been laid. In six months, I will pick them up again and they will come to live with me in Olst. 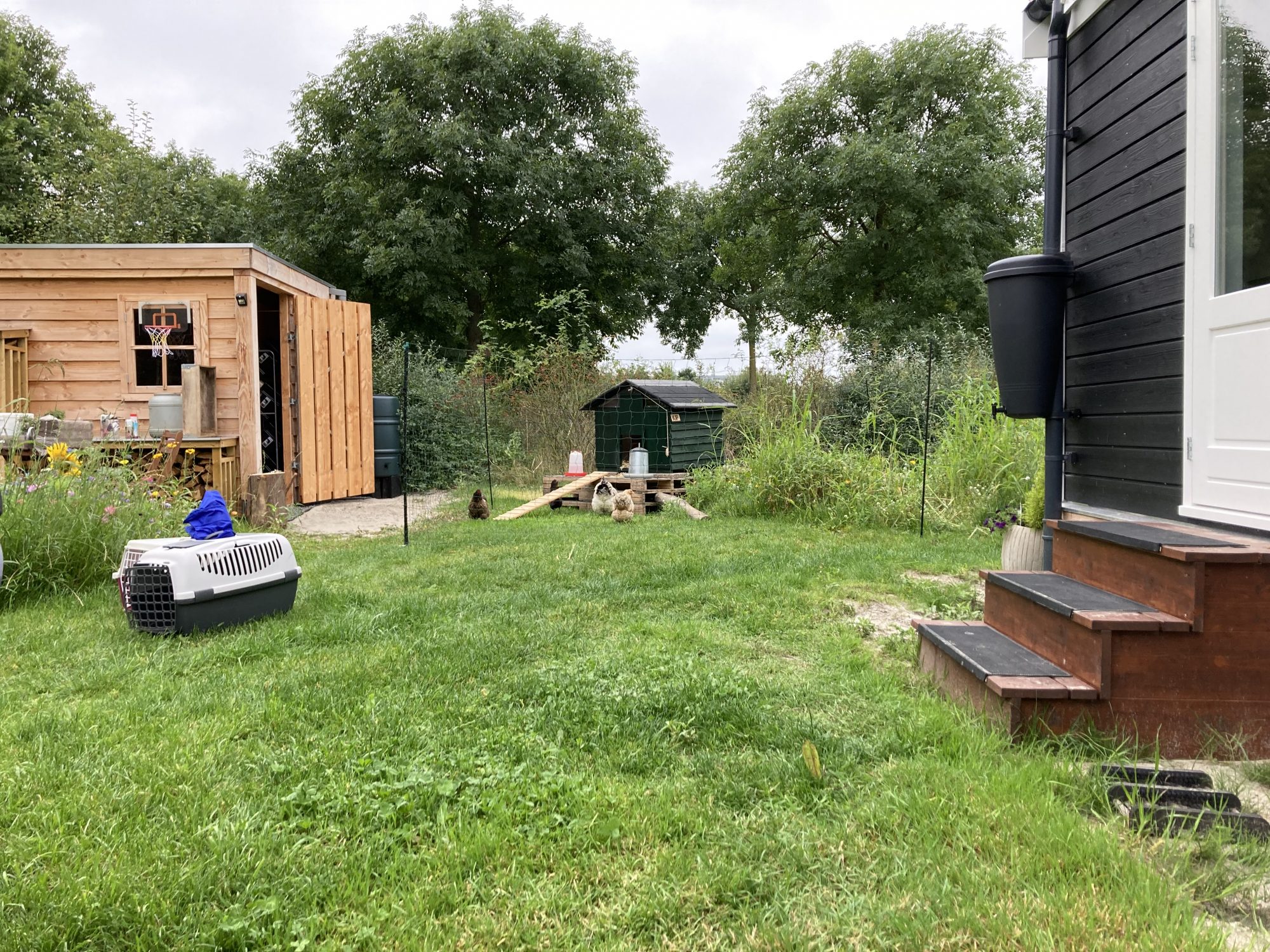 So, now it’s time for some well-deserved rest. Well, a lot is happening around the construction of my new house that demands my attention. Terrific! I have all the space in my head that I need now to focus on that. But I will write about that in another blog. Have a great day!