As you may know, I share my Tiny House with two furry friends: my cats Jack and Hella. It’s as much their home as it is mine, so I took that into account when designing my house. For instance, I asked Walden to add a cat flap to the design and I chose a fixed staircase because I expected Jack to have difficulties with a ladder. You see, Jack is 17 years old, very elderly for a cat, and he isn’t as limber as he used to be. 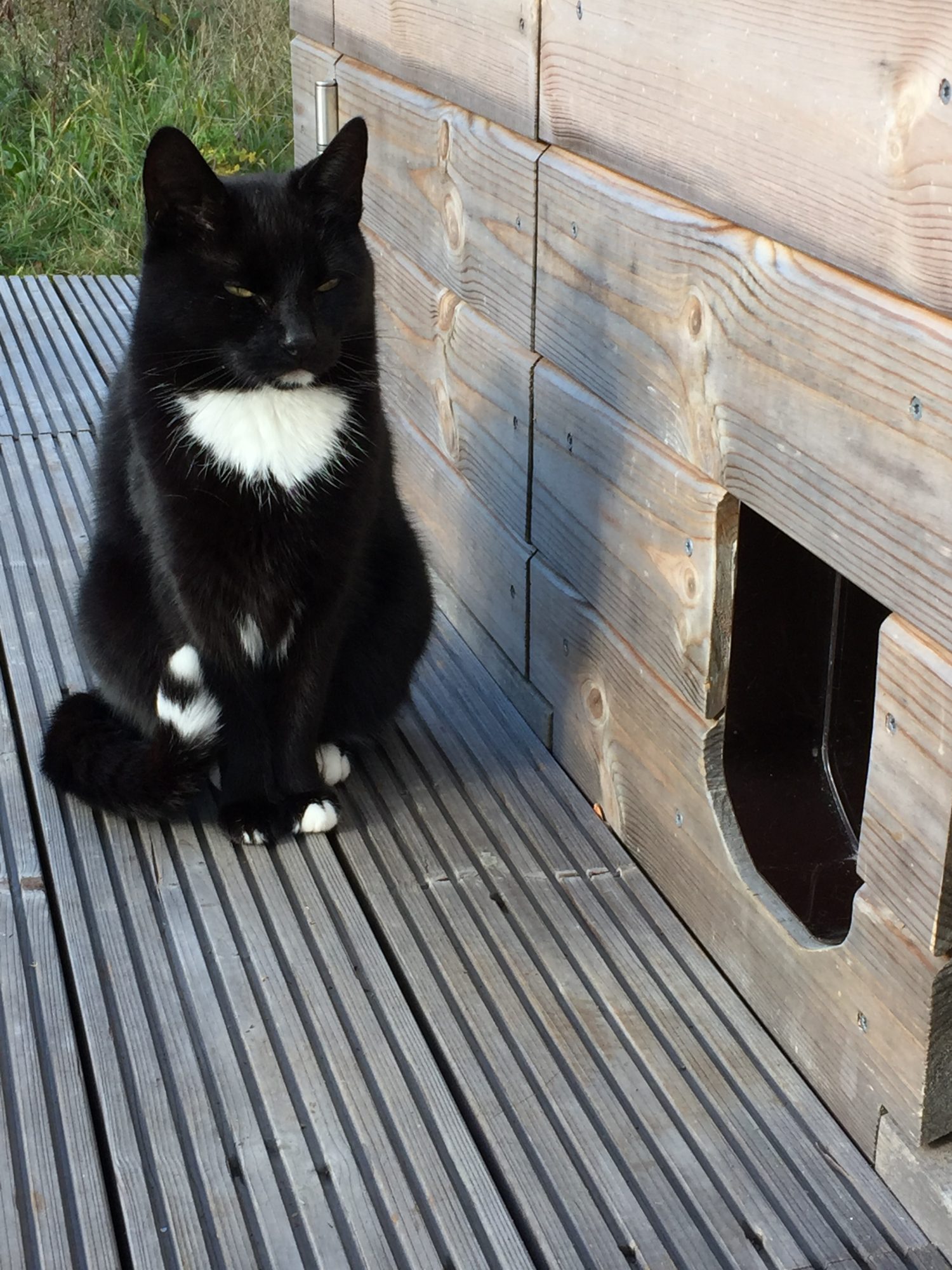 Hella at the cat flap

For the first two weeks in our new home, I had a big coop of mesh and spruce slats around the porch, so Jack and Hella could go outside without escaping. I only have one entrance into my house and it would be very easy for them to escape while I am getting into the house with full grocery bags in my hands. And it’s very nice to have the doors open around May/June. After two weeks they were completely accustomed to their new surroundings so I could remove the coop again. I remember how happy I was seeing Hella running and sneaking through the grass, hunting for mice. Sorry for the mice, but Hella is queen of the jungle here. Jack seems happy too, but he doesn’t have the urge to wander off and stays in or close to home. 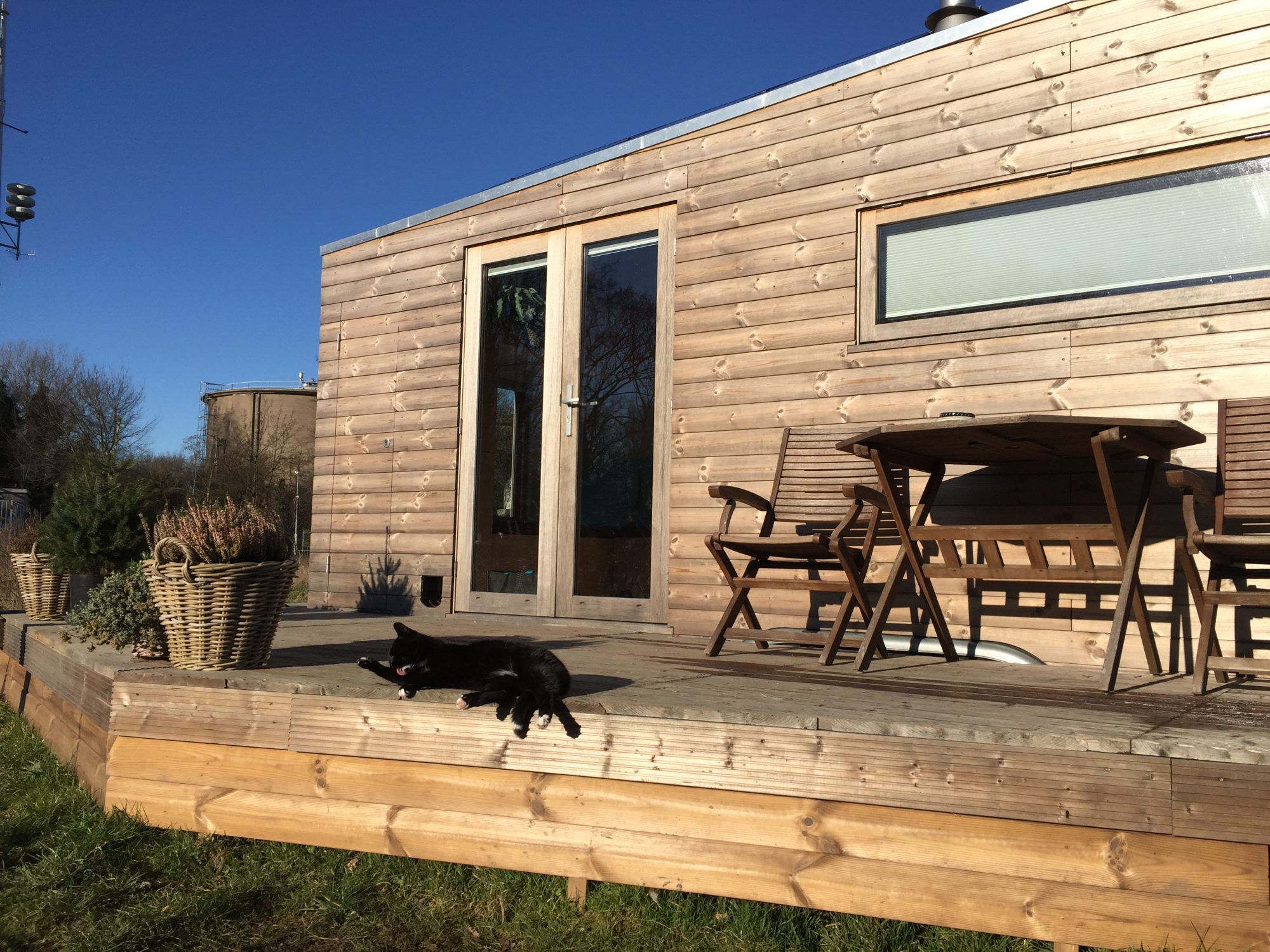 I bought a scratching barrel so that they’d have something to sharpen their nails on as well as a place to hide. It’s kind of big and actually they rarely use it. But every now and then Hella sleeps inside it and she does use it for scratching. Not Jack, he prefers the hamper…I don’t have a litter box. They can go outside whenever they want to and there’s a litter box on the porch for Jack. I’ve had it inside occasionally, like at New Year’s Eve. But what an instant mess; the litter gets spread around the entire house. 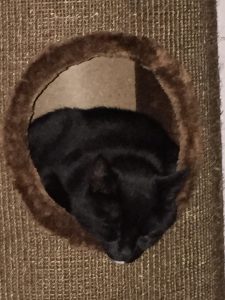 With two cats in a Tiny House, it gets messy pretty easily. All that fur! And since they sleep on the bed, the bed linen gets dirty quickly too. I always use a bedspread. It’s mostly Jack’s favorite spot, so warm and cozy. Hella likes to crawl into my wardrobe sometimes, which doesn’t please me because of all the hair. But it’s so cute to watch that I can’t bear to chase her away. I’m just a big softie ;) 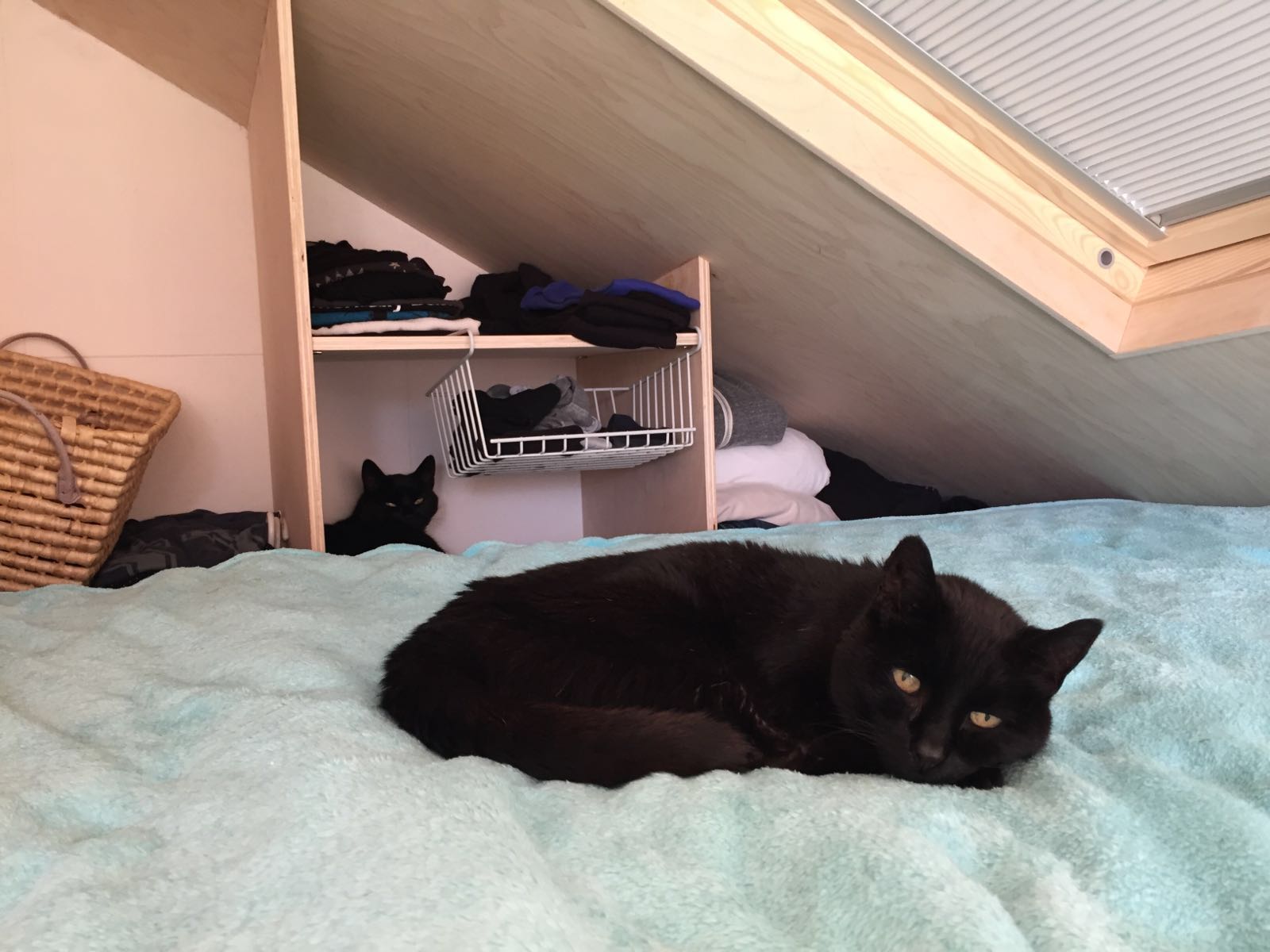 Hella in the wardrobe, Jack in the front

Once you accept all the loose fur, having two cats in a Tiny House is actually fine. I’m happy I’m able to work from home now so I can keep the house warm during the day. When it’s really cold outside and I’m away all day, the house gets pretty cold despite the good insulation. Hella can take the cold with her insulating fat layer. But Jack doesn’t have that, being 17 years old with a chronic bowel problem. So he has difficulty keeping himself warm. At night the wood stove doesn’t burn and it can get chilly inside. Jack always crawls under my blankets and uses my body heat. Not good for my night’s rest but hey, you need to be there for your buddy ;) 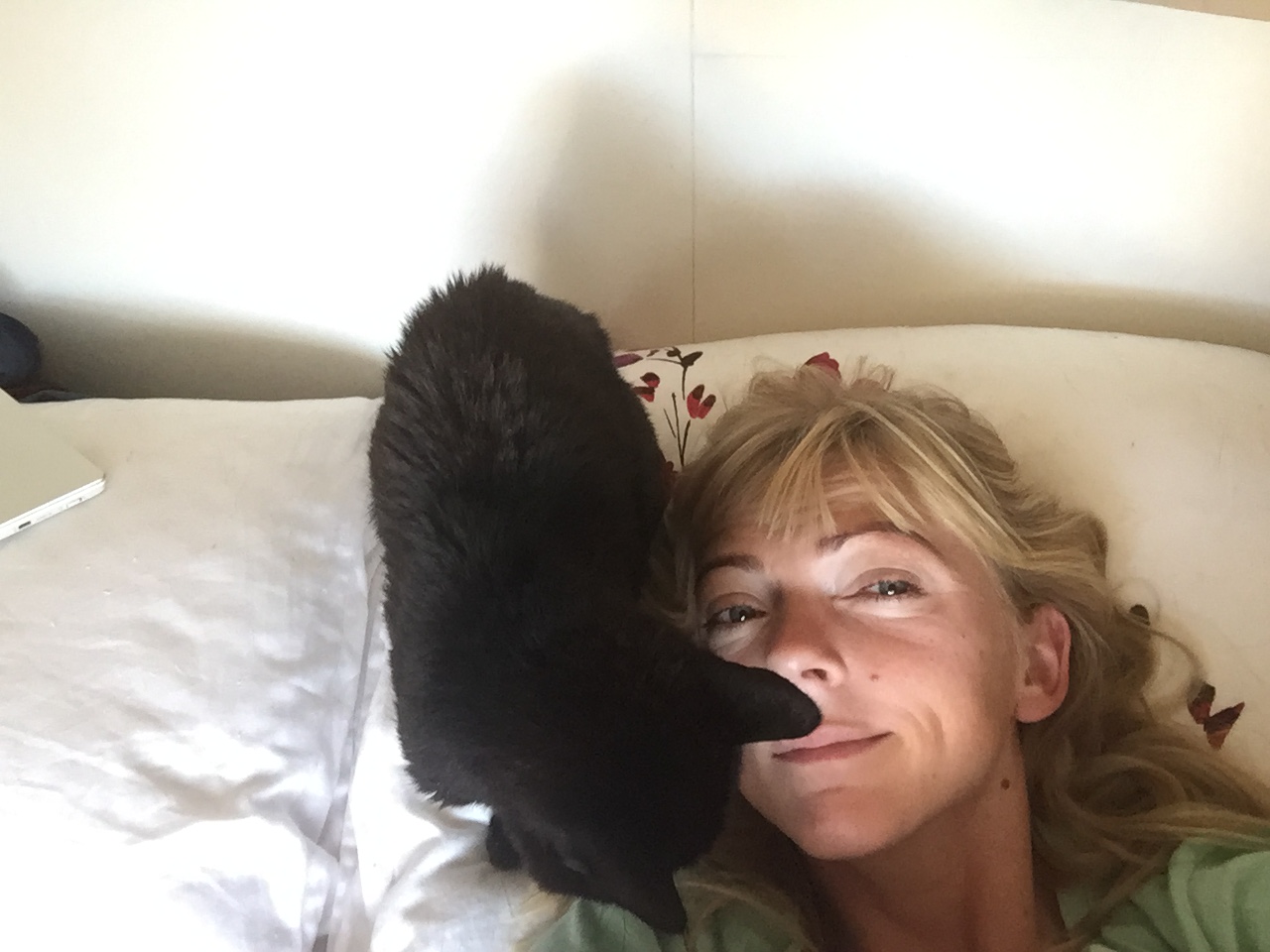 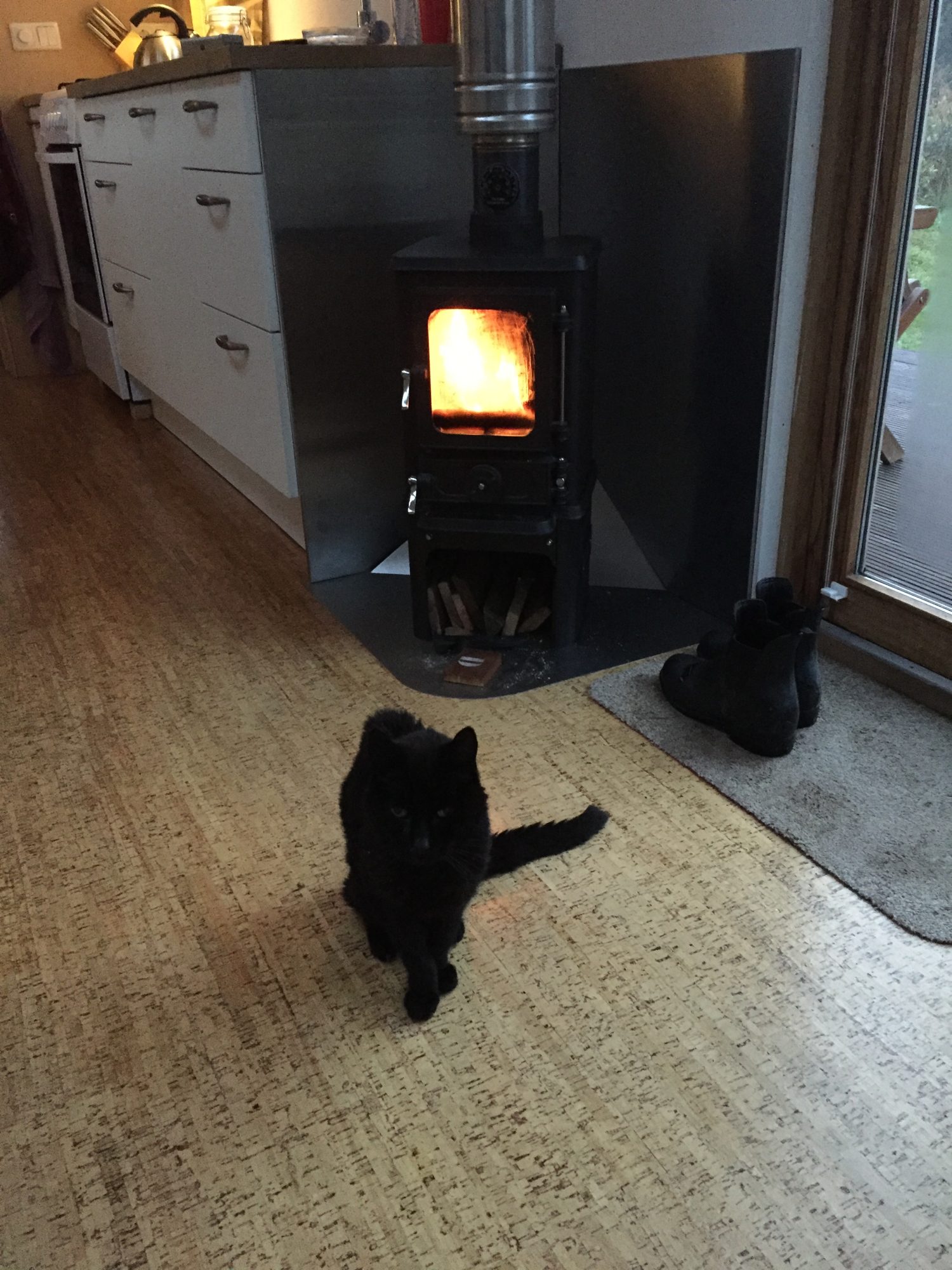 The moment I get out of bed I get the heat going and Jack takes his place in front of the wood stove. If I happen to be out for the day, I leave a hot water bottle in bed and make sure Jack can lie next to it if he wants to, though I haven’t seen him use it yet. I’m sure there are other solutions as well, like cat baskets with a heating element in it or something, I have no idea! 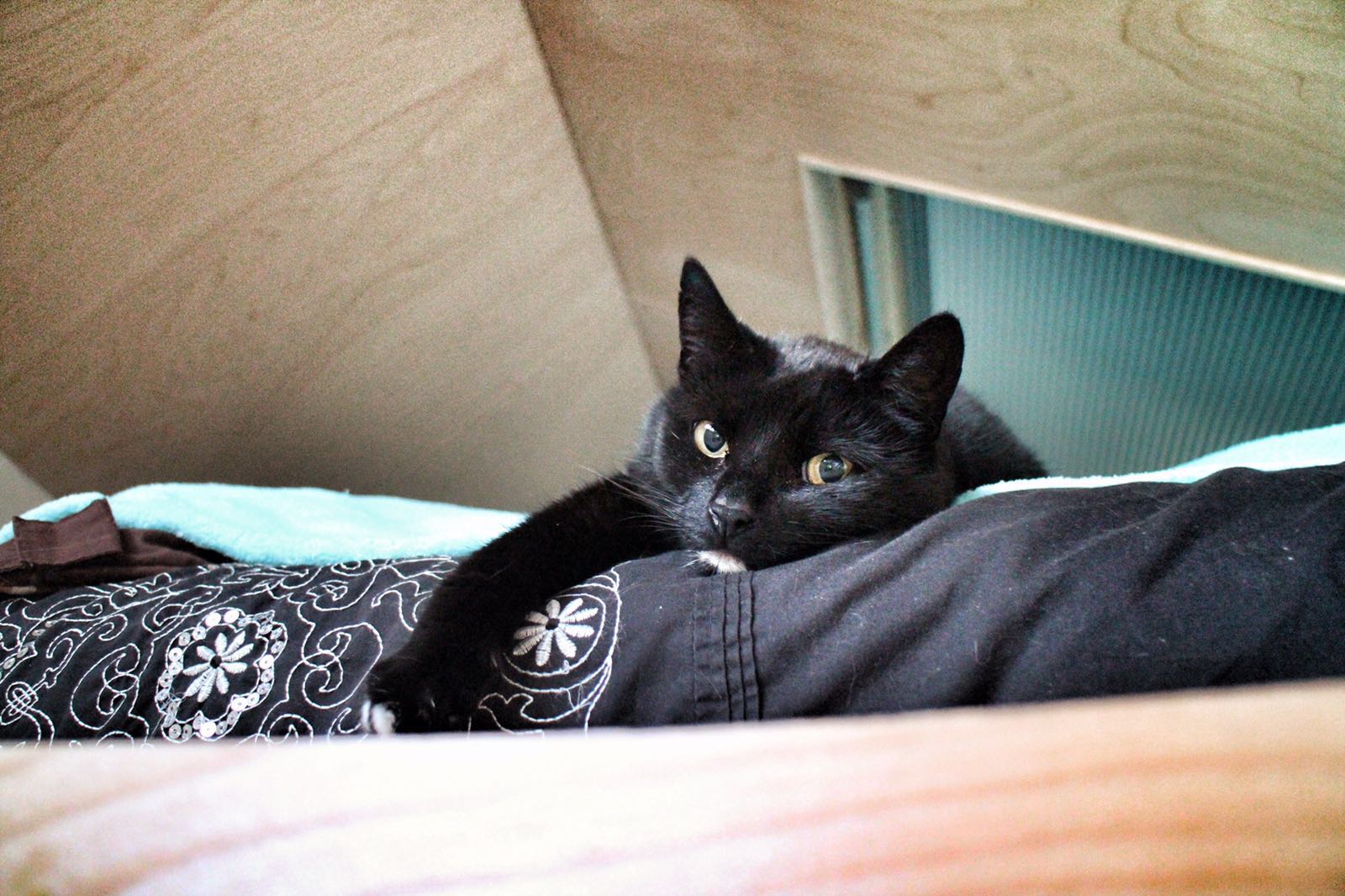 Hella likes to lie on the couch these days, just staring out of the window or sitting on my lap. Jack comes for his TLC in the evening; we love to cuddle together. He crawls all the way up in to my neck. Hella starts drooling if she’s happy on my lap. Nice Hella, thanks for the wet spots on my pants! Sometimes when I come home, she’s waiting for me and starts mewing loudly and violently rubbing the deck with her head. Sometimes she runs along with me for a bit. I’ve always had cats and I wouldn’t want to miss it – seeing your buddy so happy when you get home. It makes me so happy! 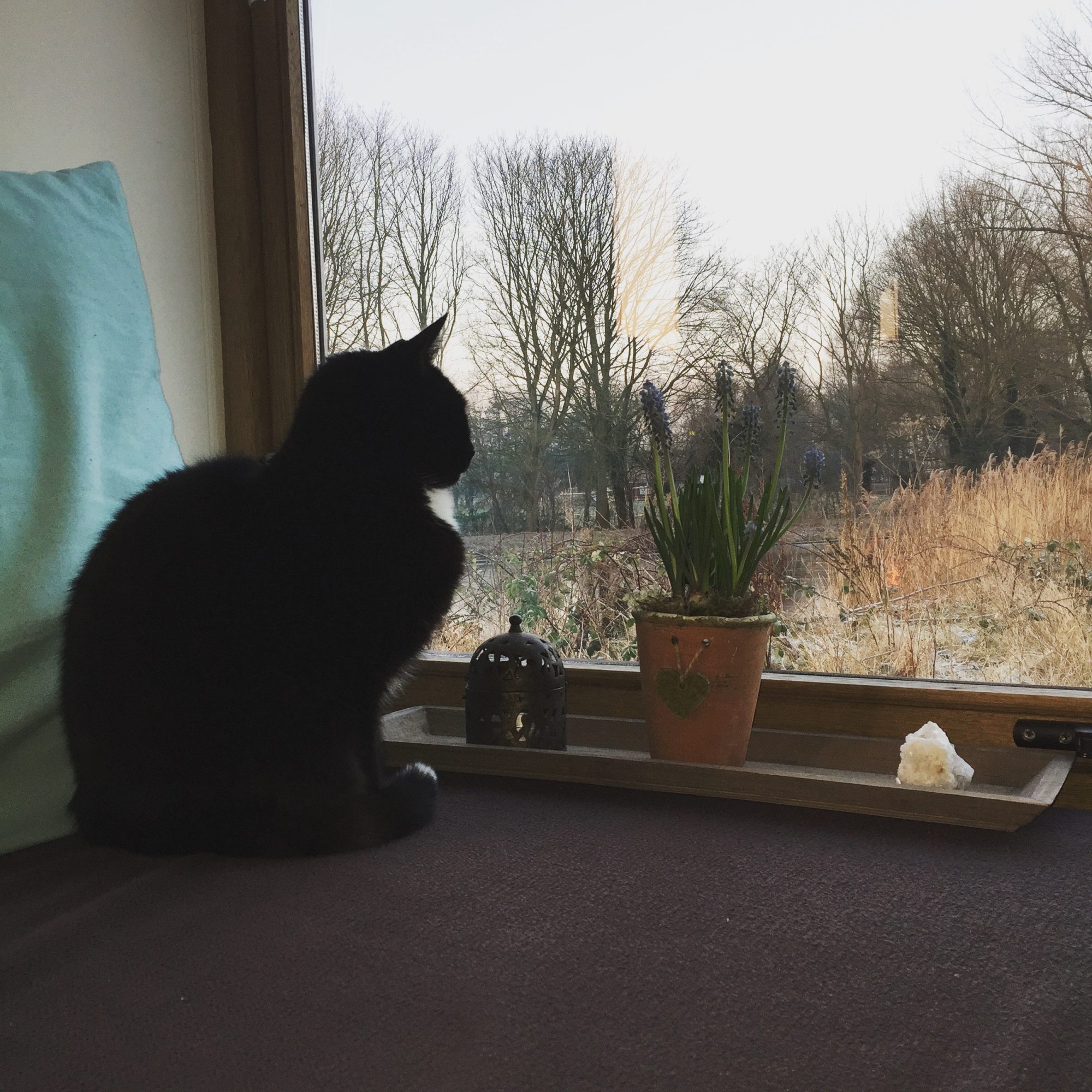 I think this might be Jack’s last year and I’m already dreading the goodbye. I’ve had him ever since he was a little ball of fur of only 9 weeks old, the weakest in the nest. Back then I made a deal with him, that he was to become at least 16 years old. But I never thought he would actually make it with his bad condition. Look at him now, 17 years old! He’s outliving them all. But there must come an end to everything, and I don’t think I’ll bring in a new cat when that happens. I feel Hella is a cat that prefers to be alone. Jack and Hella aren’t close friends. Luckily, they are not enemies either, they just accept each other’s presence. For now, thankfully, Jack is still here and I get to enjoy him every day. Although he can really be a grumpy old man every now and then: ‘feed me now woman!’ :) 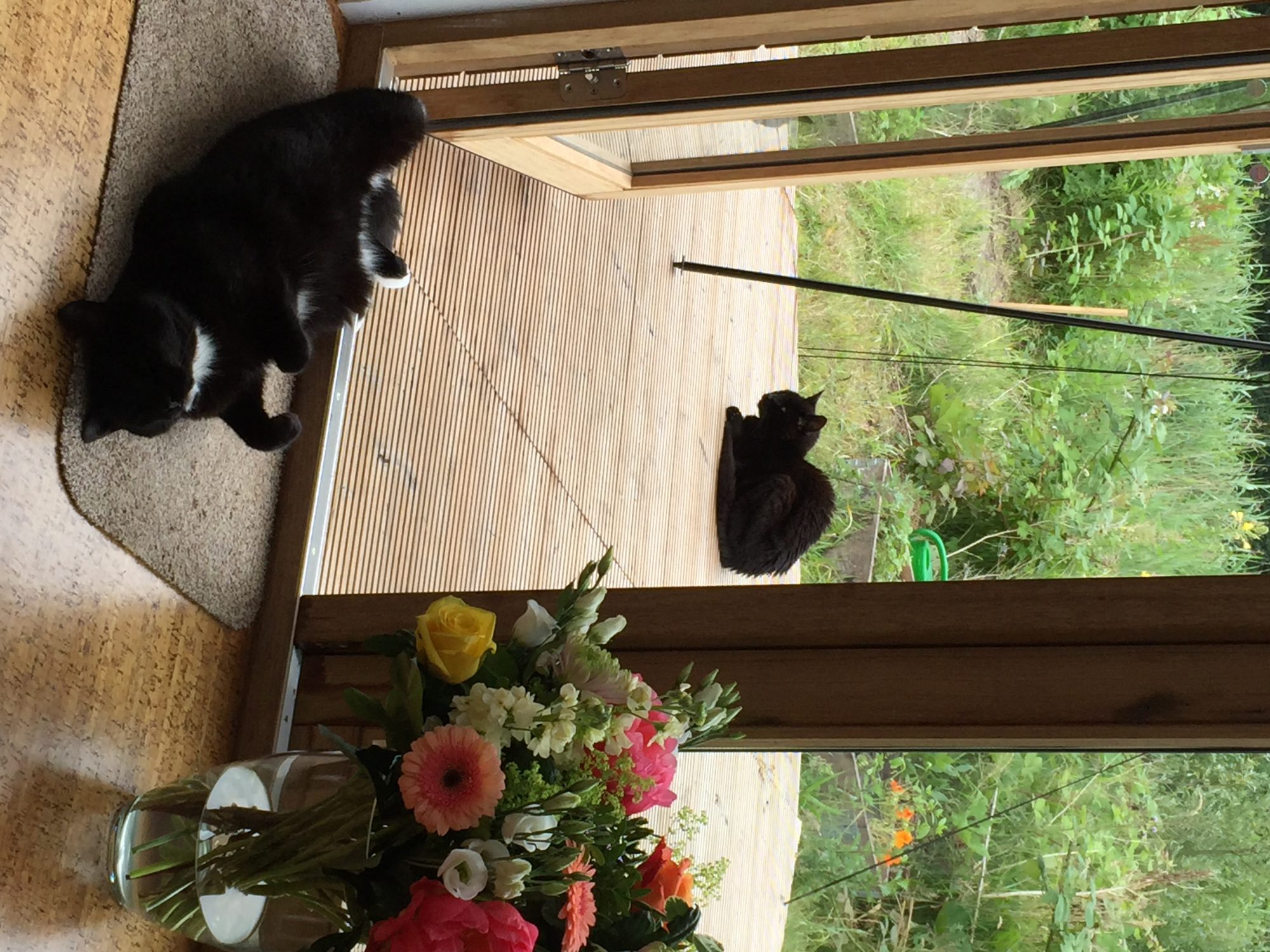 Hella loves to pretend that she is a model, by the way. I think she loves having her picture taken and being filmed! And they’re mostly cute pictures too. Jack doesn’t care for that kind of attention, he’s more shy. But every now and then I can seduce him to pose for a photo or video, like this: