A couple of days ago I wrote a very personal blog. Though I was a little anxious to write so openly about parts of myself that I find to be less beautiful, and to show that everything is not always peachy in my life, I had no second thoughts about whether or not I had done the right thing in publishing it. The overwhelming amount of sweet, warm, supportive messages I received really blew my mind and did me a world of good. Thank you so much for these encouraging comments, sweethearts! Don’t worry, I’m doing fine. I’m still over the moon about my house and thankful for all the exciting chances and beautiful people I find on my path. I just wanted to let you know that I too struggle sometimes, just like everybody else.


Last Saturday I gave a lecture at a Tiny House event organised by RUW Wageningen. For an hour long I got to talk about my experiences and the Tiny House movement in the Netherlands. There was a slight misunderstanding at first, only a few days before the event I understood that it was held in English. Though I have previously given a TEDx talk in English, this was something else entirely. Thankfully everything went very smoothly! De library auditorium was filling up with people and after David announced me I started my lecture. Sometimes things just flow, Saturday was such a day. I love that! It never seizes to amaze me that I can so easily fill an hour or more, talking about Tiny Houses. After my lecture the audience was given the chance to visit one of two Tiny Houses in the area. The Tiny House build by Henk Eshuis, otherwise known as Tiny House Henk, of een Solar cabin. Unfortunately I had to leave right away for another appointment. 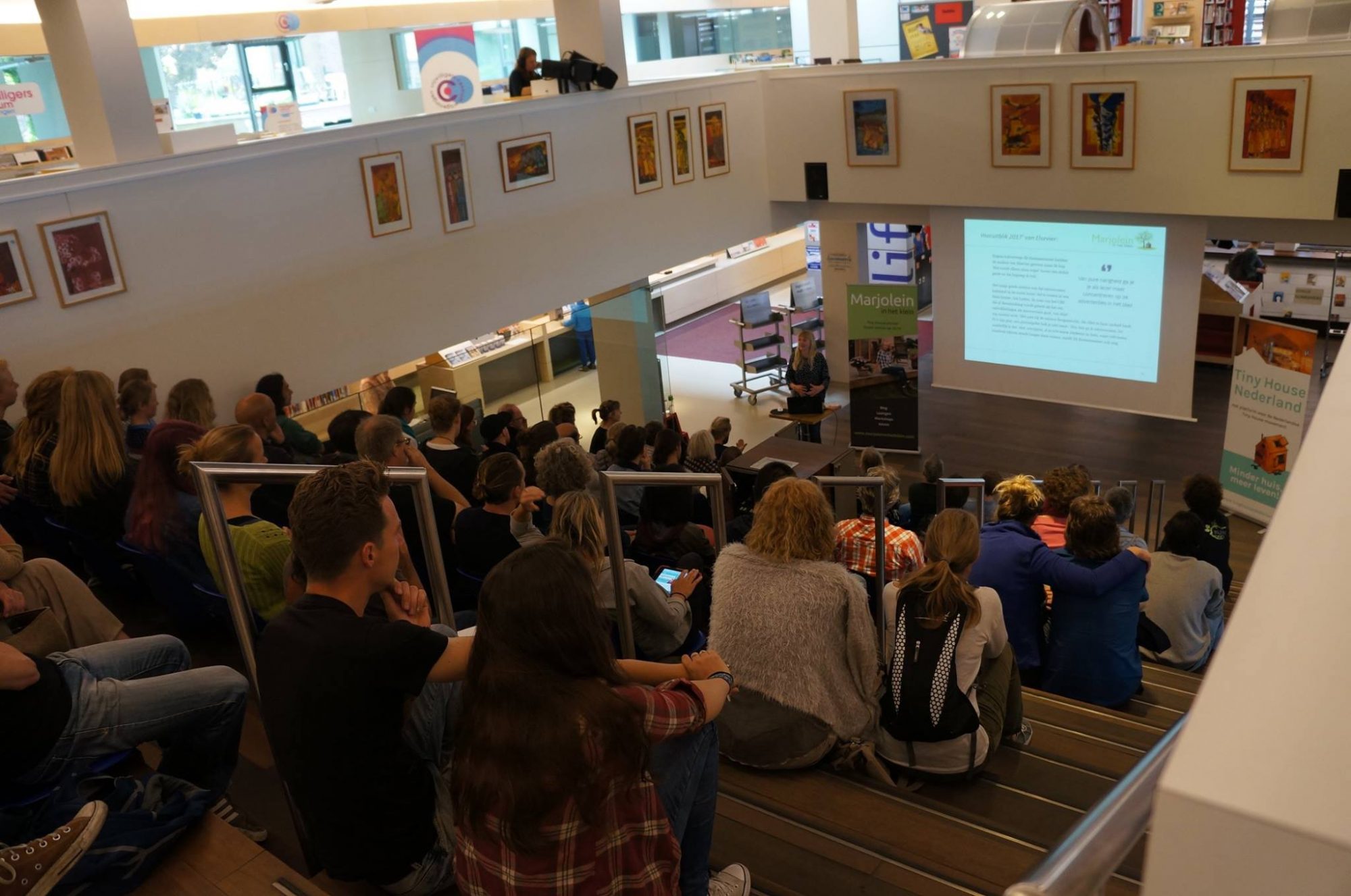 At an inspiring location in Amsterdam, called De Ceuvel, the first edition of the ‘Make the world great again’ festival was about to commence. I had agreed to meet Gerbrand from te blog ‘Van Groot naar klein’. Gerbrand and Natasja are going to have their Tiny House build this year and I’ve met them twice now. We immediately liked each other, they’re a great couple and when I asked on Facebook if anyone would like to join me to the festival, Gerbrand responded with enthusiasm. This was my first time at de Ceuvel, what a cool place and what a fun festival! Fun workshops, nice music, kind people and an overall great atmosphere. We took part in a workshop about sustainable diet and one about digital detoxing, ate a divine vegetarian hamburger and chilled with a beer and some live reggae music. That was fun, thanks Gerbrand! ???? 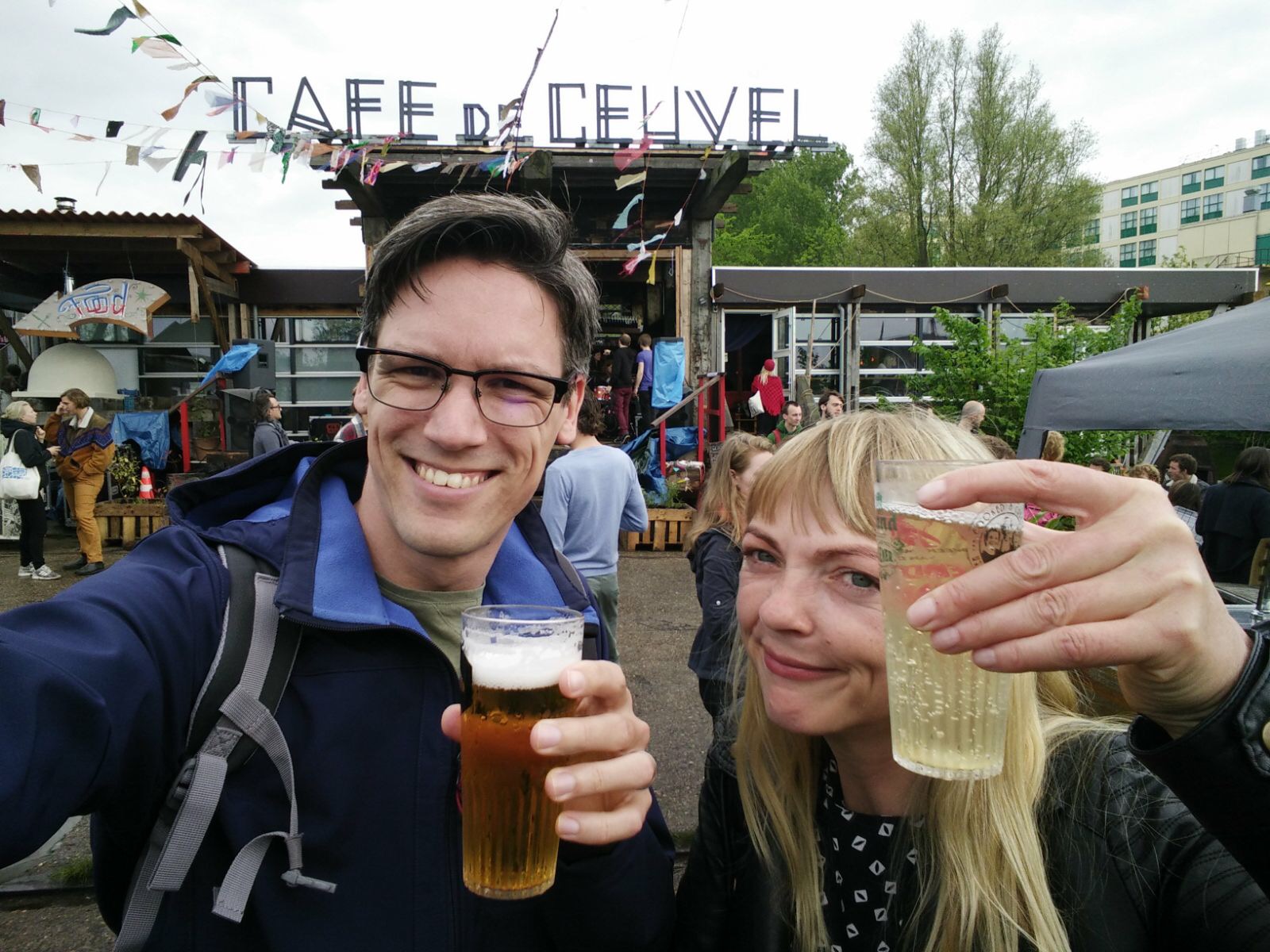 What a change in the weather are we having right now! It is early in the morning while I’m writing this blog, but it’s already 17 degrees Celsius outside and tomorrow the weather forecast predicts temperatures up to 27! After that we’ll get some rain, so I decided that this Wednesday is the day to clean out my water tank. It’s a chore I’m not looking forward to, to be honest. Though I have a filter in my water tank, some dirt got through and now there is a fine layer of sediment on the bottom of the tank. Regardless, it’s a good idea to clean out your water tank at least once a year I think. I asked Boy for advice on what cleaning solution is best to use and he adviced me to use natrium hypochlorite. So today I’ll go on a hunt for the stuff, let’s see where I can get me some. Raymond from the Urban Earthship has offered to help me out tomorrow, the sweetheart. I hope that I can fit through the hole in the top of the tank, I think I will need to get in there in order to get to all the nooks and crannies. What a project, haha! 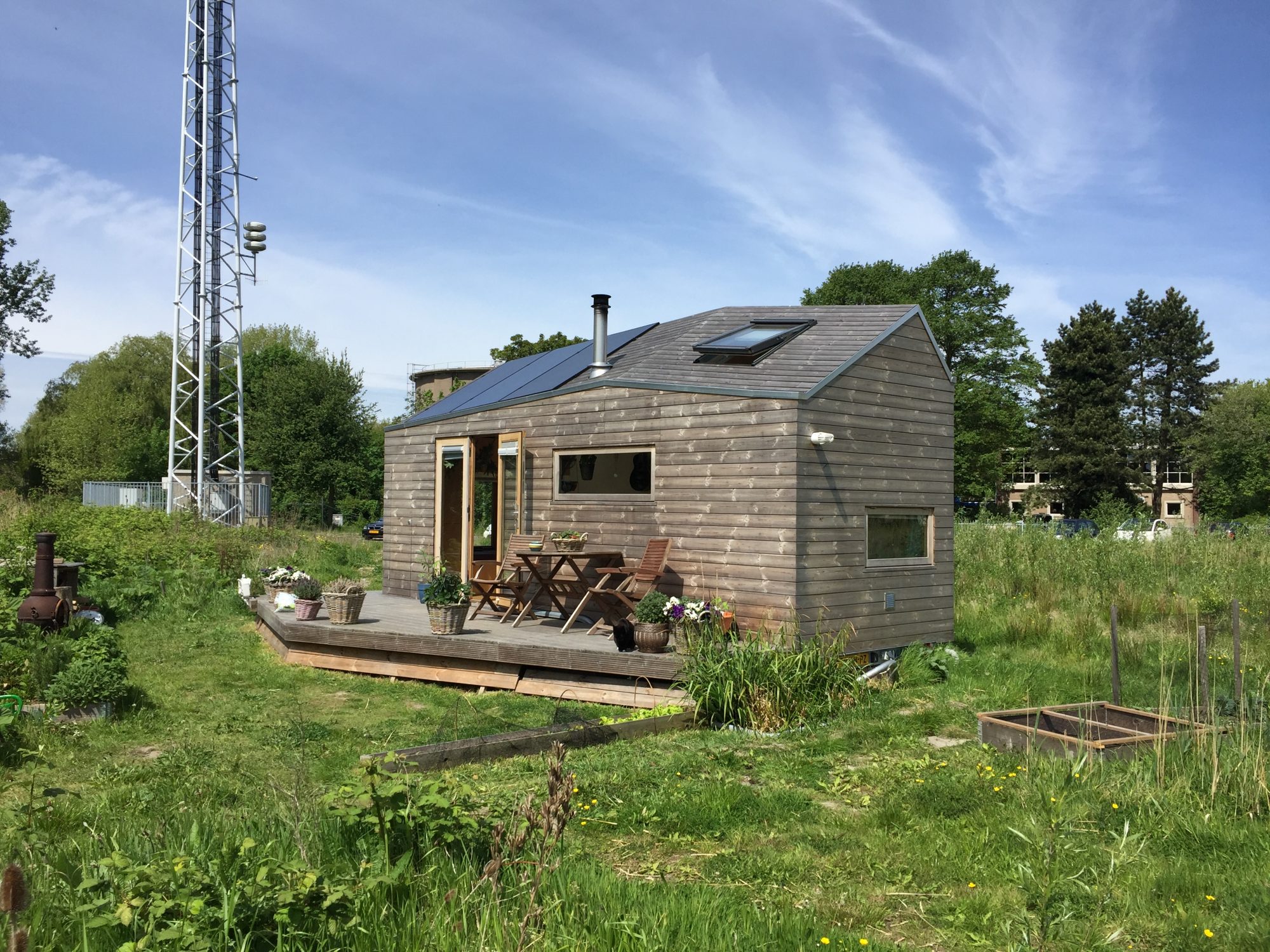 Oh well, you’ll read all about it, I promise to write a full report. I was able to take a short shower at home yesterday by the way, we’ve had some rain in the past few days. I appreciate that so much now, something simple as taking a shower at home. I love that. That you learn to appreciate seemingly small, basic things again when you live off-grid in a Tiny House. I’ve put my cucumber, pepper and tomato plant in bigger pots last Sunday (thanks for the flowerpots mom and dad!) and put them outside for the first time. I will take the pepper inside in the evenings for now. Hopefully they will bear fruit, this is my first time growing cucumbers. And I’ve never had much luck with tomatoes in the past. But on the porch on the sunny south side of my house things should work out, right? I bet it will. Enjoy the warm days, my sweet readers! 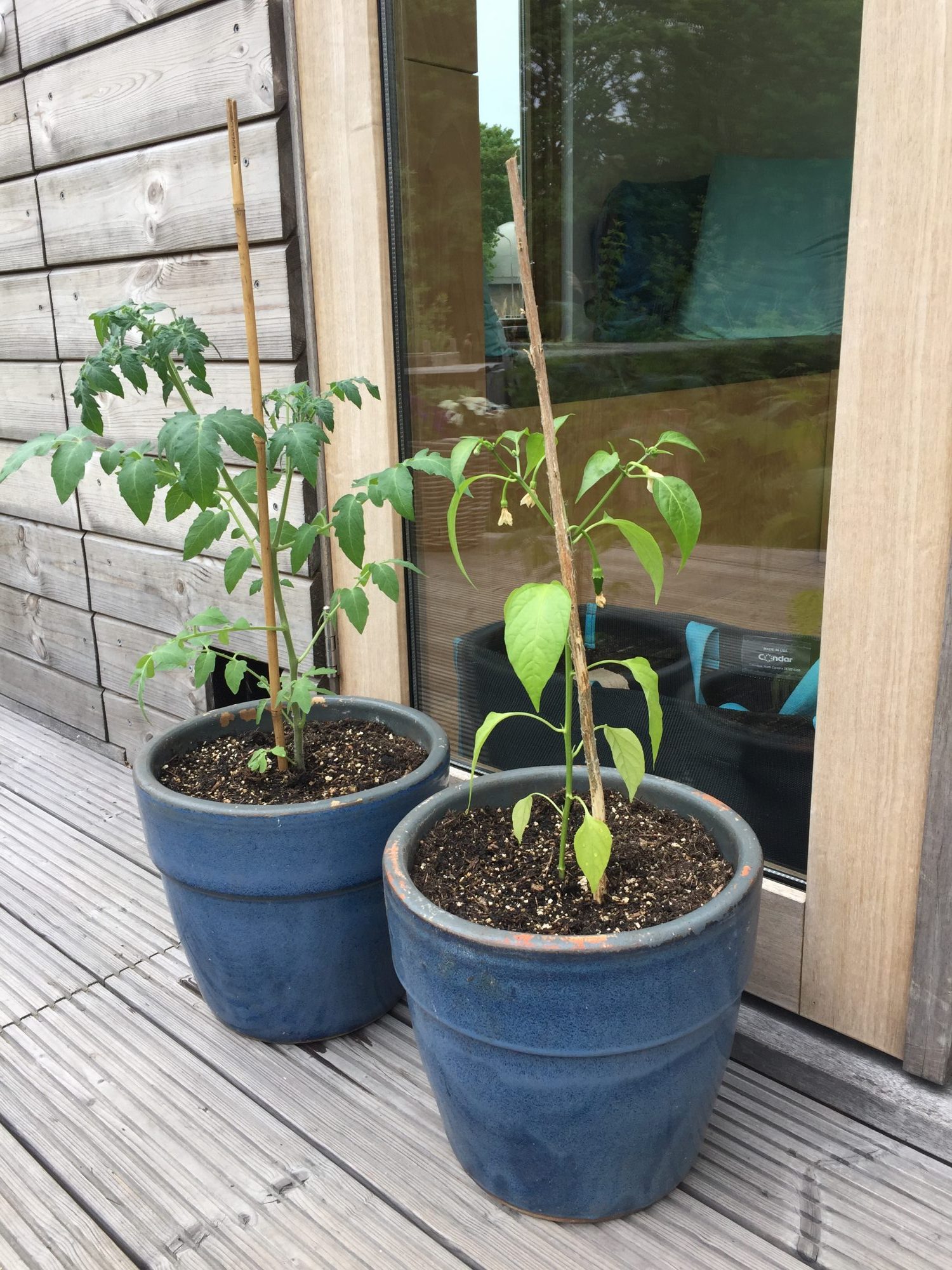 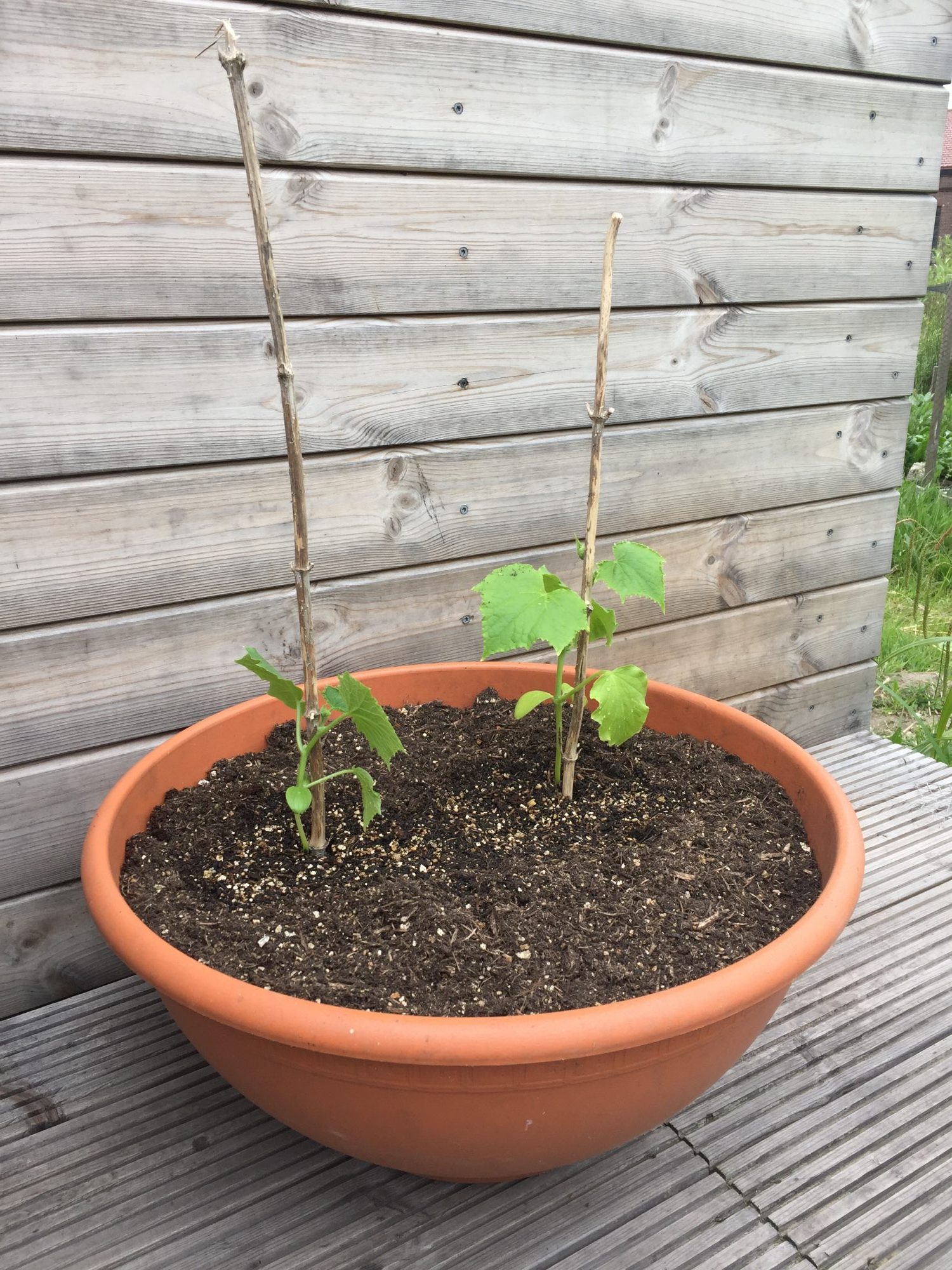 Take a walk in my shoes Cleaning a water tank, 101