Exactly one year ago yesterday was the day when the build of my Tiny House was finished and my dream home was driven to Alkmaar. Wow, a year already, what a milestone! Next Thursday I will have lived here for a whole year, back then it took me three days to move. I have such beautiful memories, of that special day my house finally arrived in Alkmaar. The many visitors, the media craziness, the night I picked up my two cats and brought them to our new home to spend the night for the first time. So how was it, this first year living in a Tiny House? It’s time for that recap I promised a while ago! 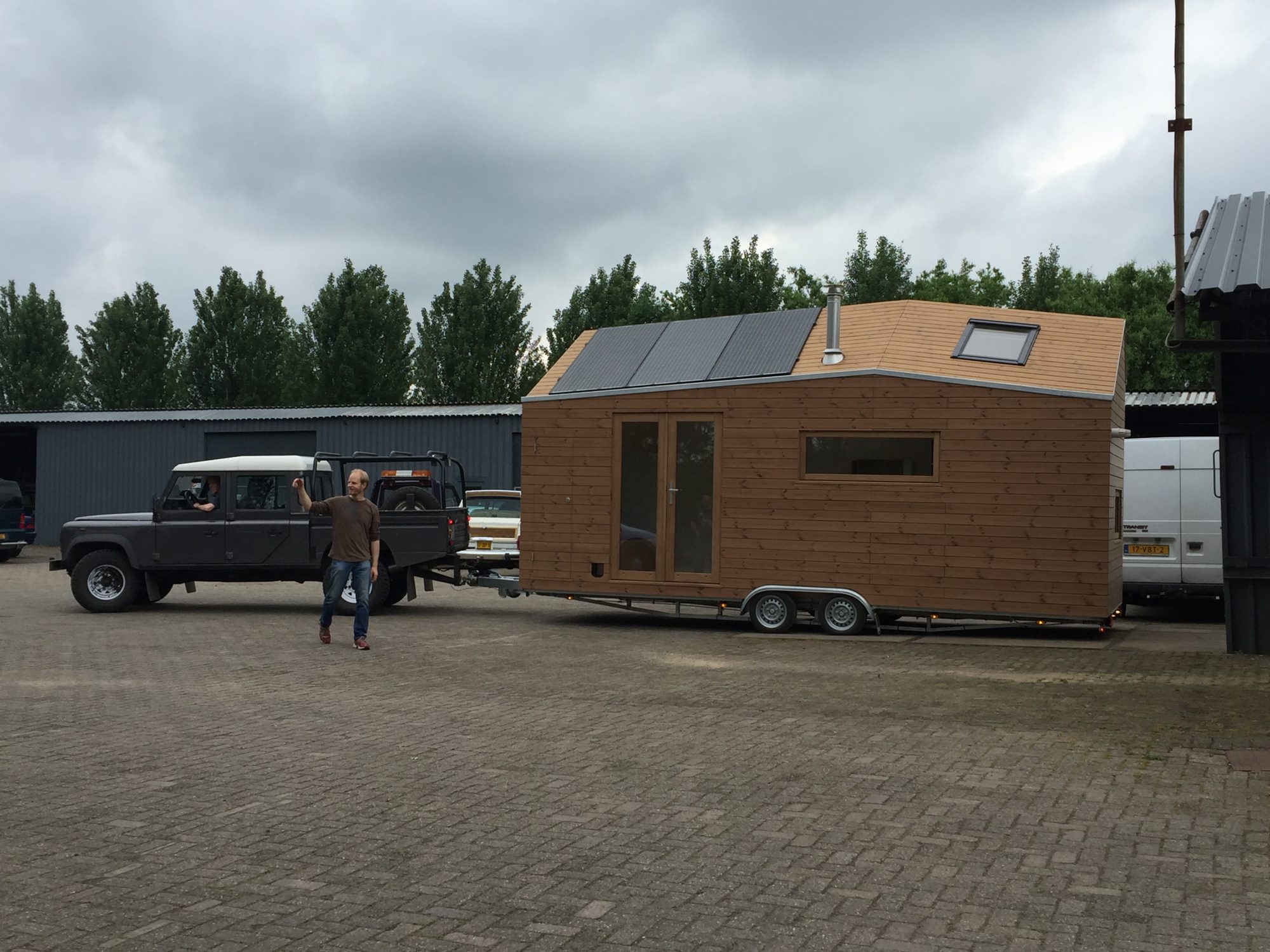 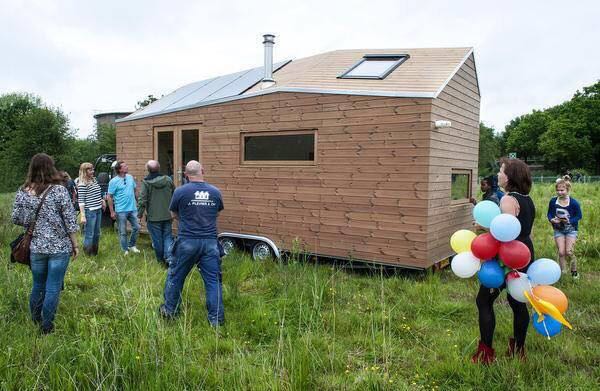 Let me start with this: May is an excellent time to start living off-grid in a Tiny House. The weather is nice, so you can take your time and figure out how everything works and try it out. At first I didn’t have my water supply system up and running yet, but with the help of my good friend Boy I soon had 4 jerrycans filled with drinking water and a flowjet to pump it into my house. Running water from the tap, awesome! Hauling heavy jerrycans was a bit of a drag though. I filled them at my friend Jennifer’s place as she lives nearby. As a result I quickly learned to use water a whole lot more sparingly, which is a good thing in my book. Niels helped me build a helophyte filter, Rene supplied an IBC tank for rainwater storage. Everything worked out fine. 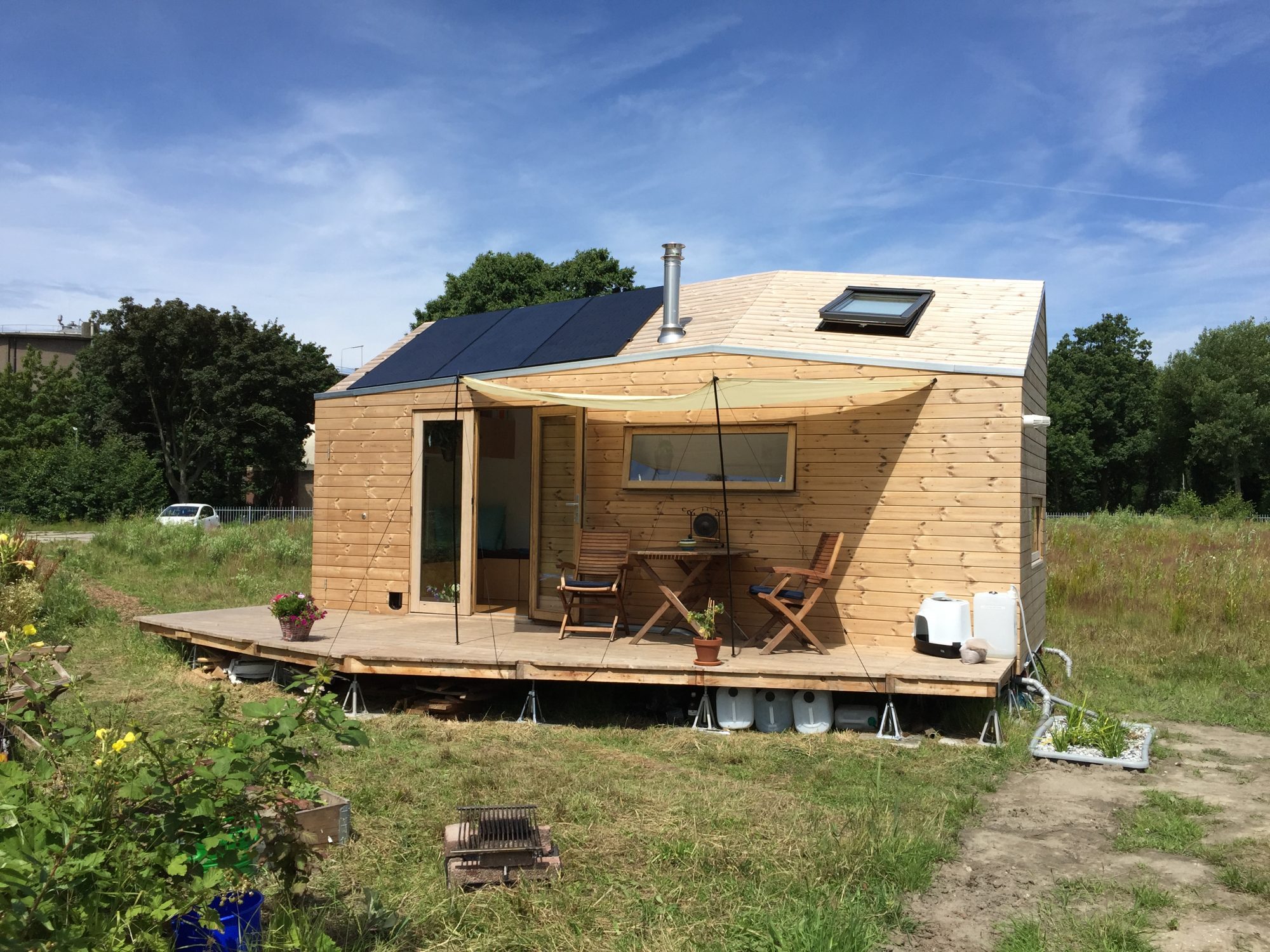 When the weather is nice and warm cats love to be outside a lot. And besides, I wanted to be able to open up the double doors too. So Jan Aart built us a temporary screened porch. What would I do without these men! Now we were able to sit outside, without me worrying about Jack or Hella running away. After two weeks they got used to the new house and area and the screen could be dismantled. The solar power system was fine, it needed a little tweaking here and there but soon it was working like a charm. I was able to cook on my stove right away. The on-demand water heater was a different story, it was not until the fall when everything worked as it should. The whole thing was replaced and after that three different mechanics had to take a look at the installation before it worked. I needed to buy a rather powerful water pump (hydrophore) and a new bathroom tap before I was finally able to take a proper shower. 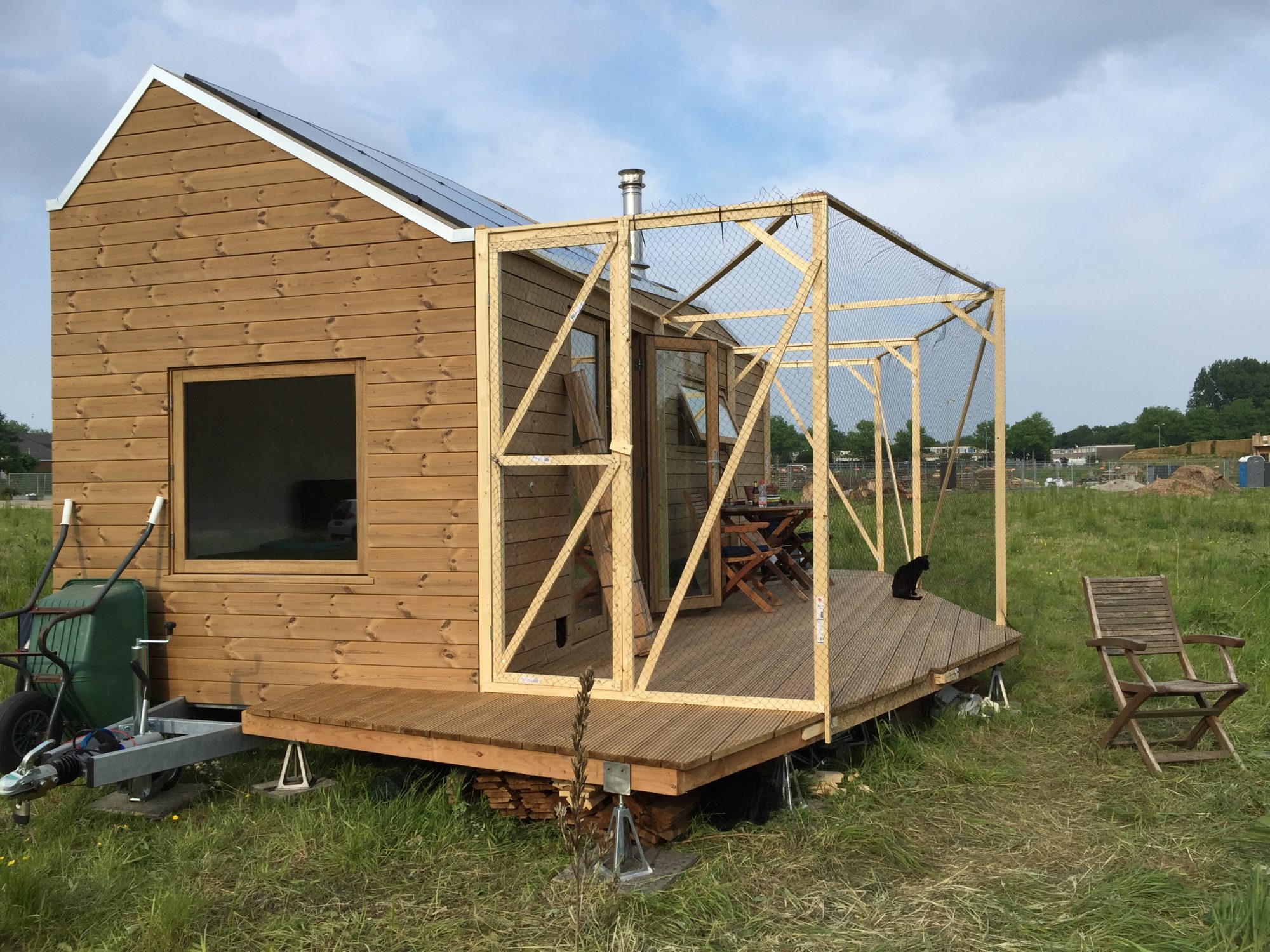 When the rains started coming more frequently I noticed that it would have been convenient to have a little awning above the entrance to my house. But I still don’t have that so I guess it doesn’t bother me that much ???? The doormat gets a little wet now and then. The cold weather really caused some inconvenience. Oh well, life gets boring without some challenges, doesn’t it! I started a little late with insulating the water supply line outside, the ground was rather wet beneath my house and it was not much fun crawling around there. I insulated the water pipe with foam covers, duct tape and straw, but it still got frozen every now and then. A large part of the pipe is buried in the ground deep enough not to get frozen, but it has to come out to reach my house and the hydrophore too. Those are the weak spots, I have decided to try out a heating cable next year. 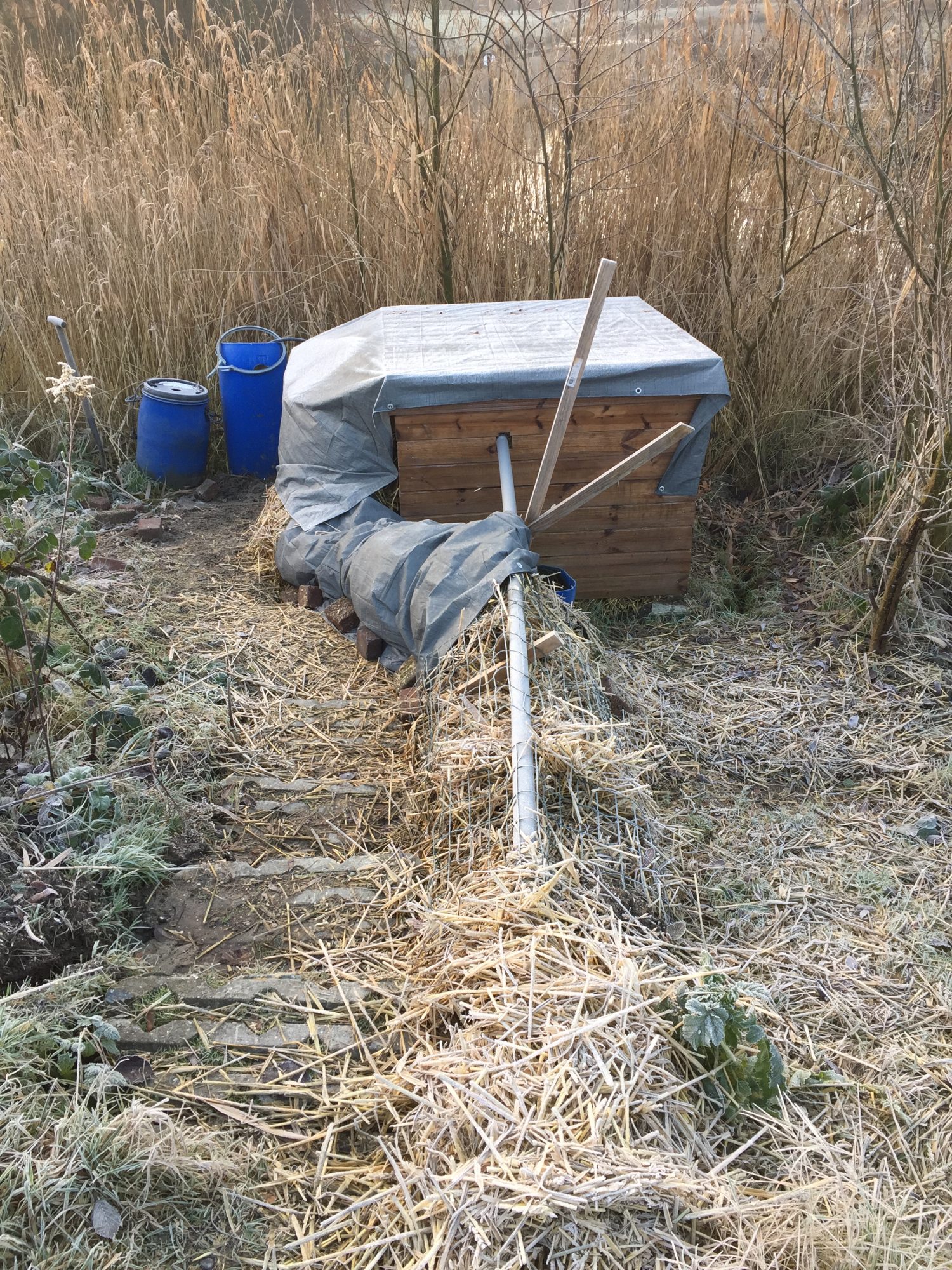 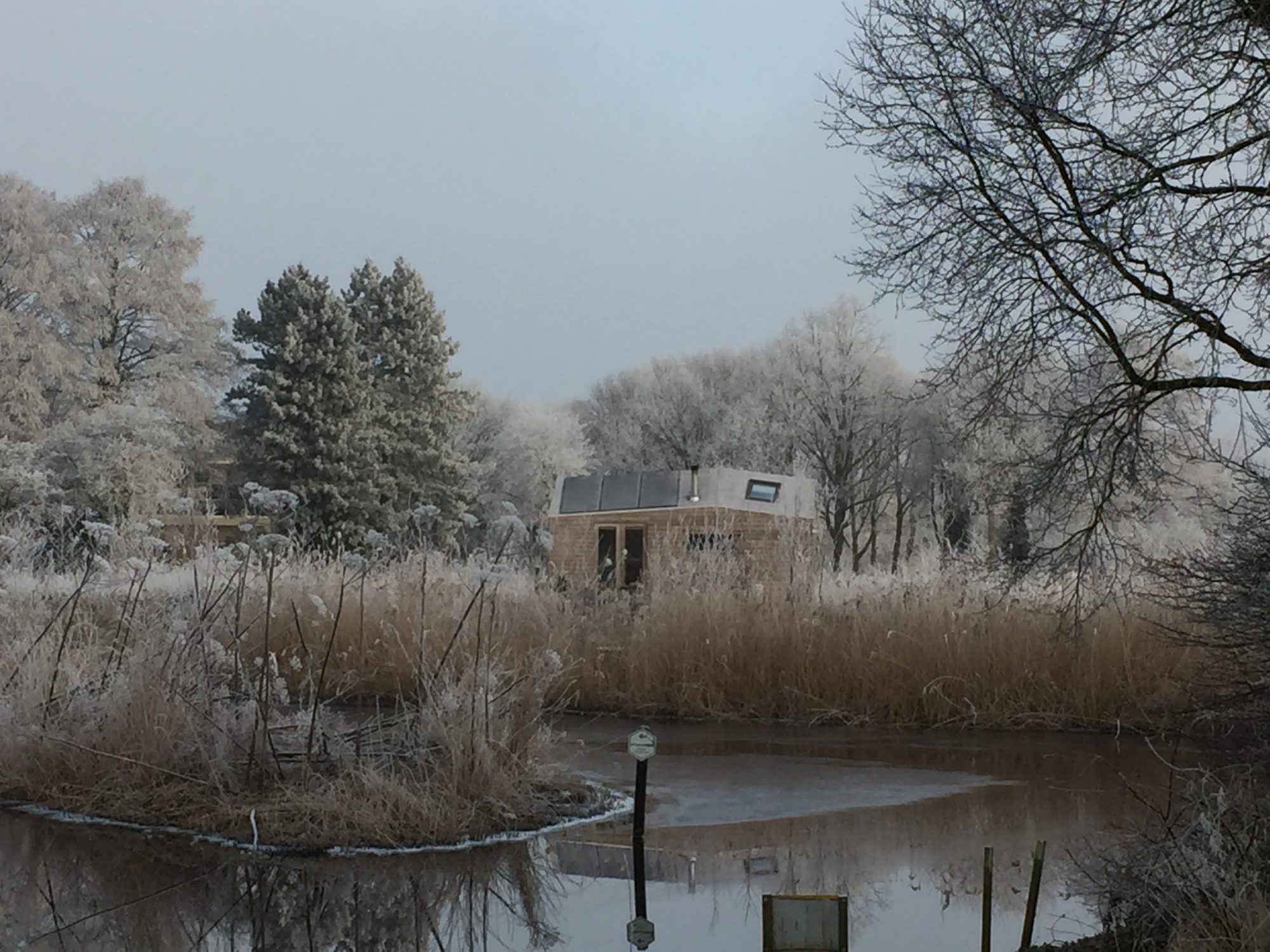 My solar installation was not enough to supply me with sufficient energy throughout the winter months. From October till March there is not enough sunlight sometimes, which caused me to run out of power. I needed a quick solution and decided to buy a small but powerful generator that I hooked up for a couple of hours, once or twice each week to fill up the batteries. My battery capacity was 2 x 750 wh, enough to get me through one cloudy day. There was some room for improvement so the sweethearts at Victron Energy spoiled me big time by changing my batteries for the huge fellows you see in the picture below: 2 x 2000 wh! That’s enough to bridge about four cloudy days, if this won’t get me through winter I don’t know what will! 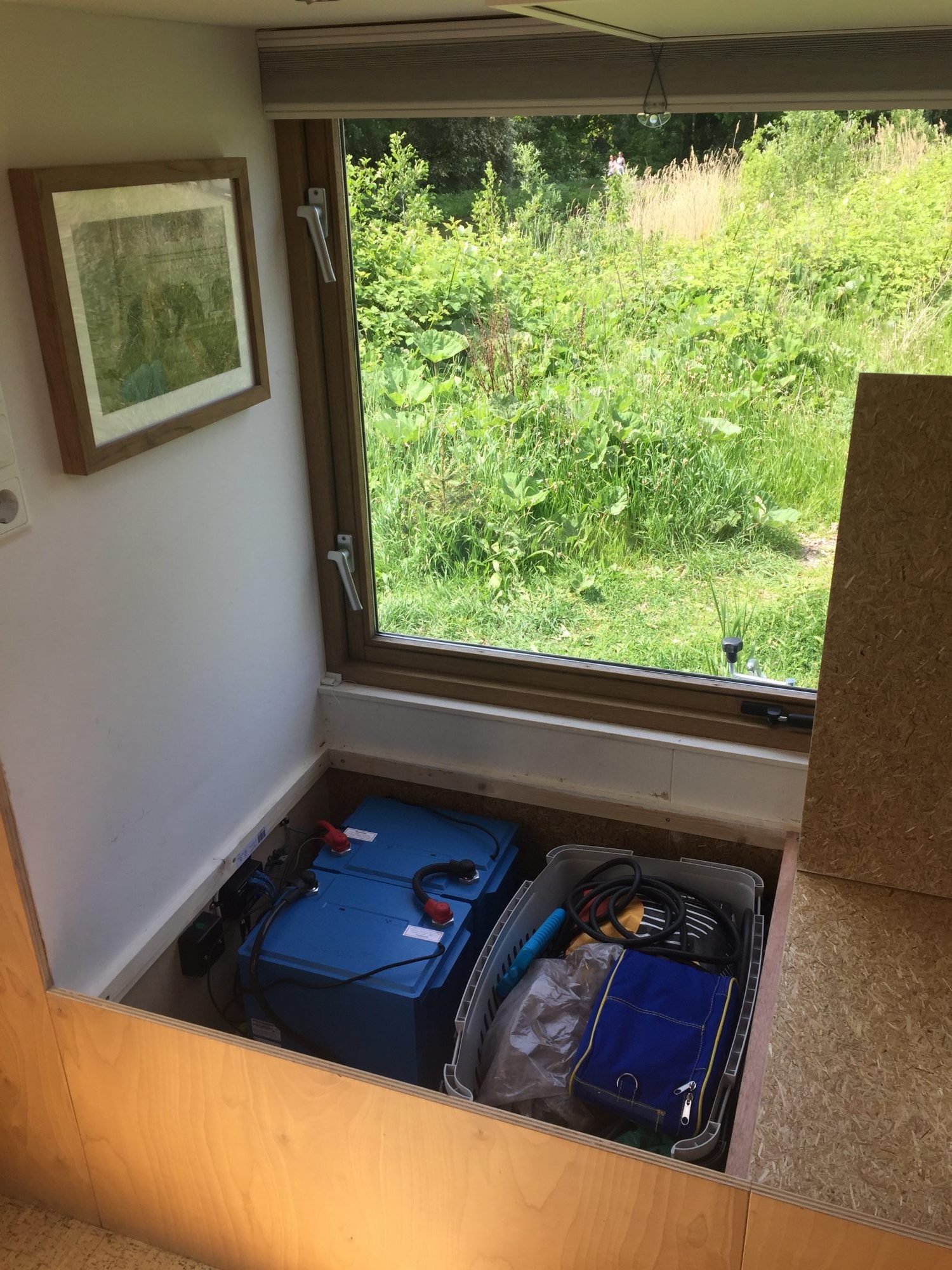 I discovered that my little woodstove is more than enough to warm my house, though it took a little time for me to learn how to use it right. That resulted in a clogged up chimney in December while I had only started using the stove since October. Lesson learned: I needed to burn it hotter.  I discovered night briquettes, they helped me keep the temperature acceptable indoors during the sub-zero temperature nights. These briquettes, that are made of compressed tree bark, burn up to eight hours. Enough to get me through the night. 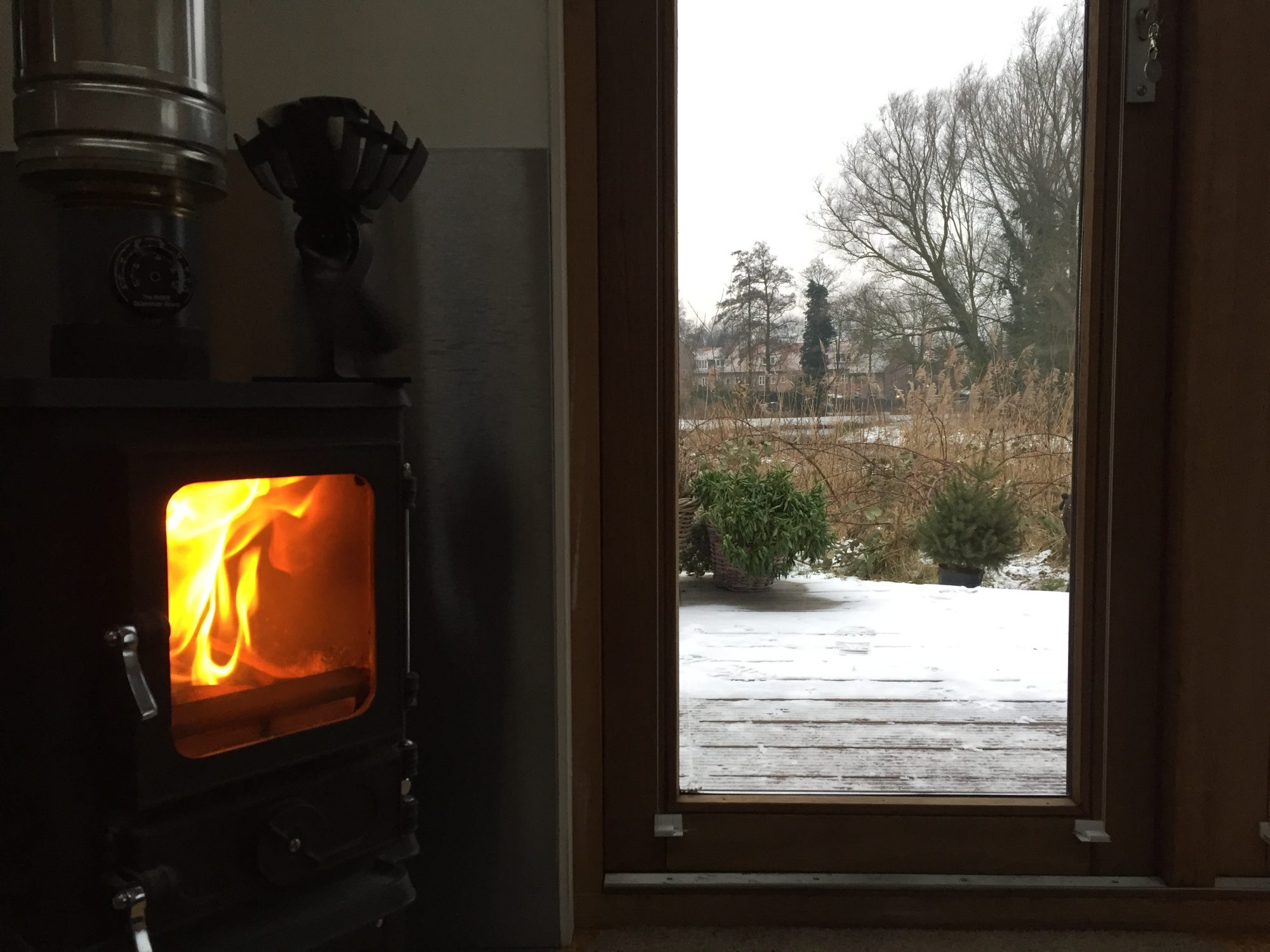 I did not get to use my sitting bath that often. During the summer months I didn’t have enough water, during the winter months there was a lack of electricity to run the water pump long enough to take a bath. But those few times I did get a chance to take a bath, oh man.. true bliss! That might be the most valuable lesson I learned this past year. I so thoroughly enjoy the simple things. I’m happy when the sun shines, knowing that my batteries are loading up.  I’m happy when it rains, knowing that I have enough water to shower. I have been told many times by people around me that they now too are happier with both rain and shine, because they think about me. That’s so sweet! I’m in touch with the weather much more and spent way more time outdoors. When you live in a Tiny House with windows everywhere to look outside, you notice that the weather in the Netherlands is often very nice. In a ‘normal’ house we tend to stay inside more often. 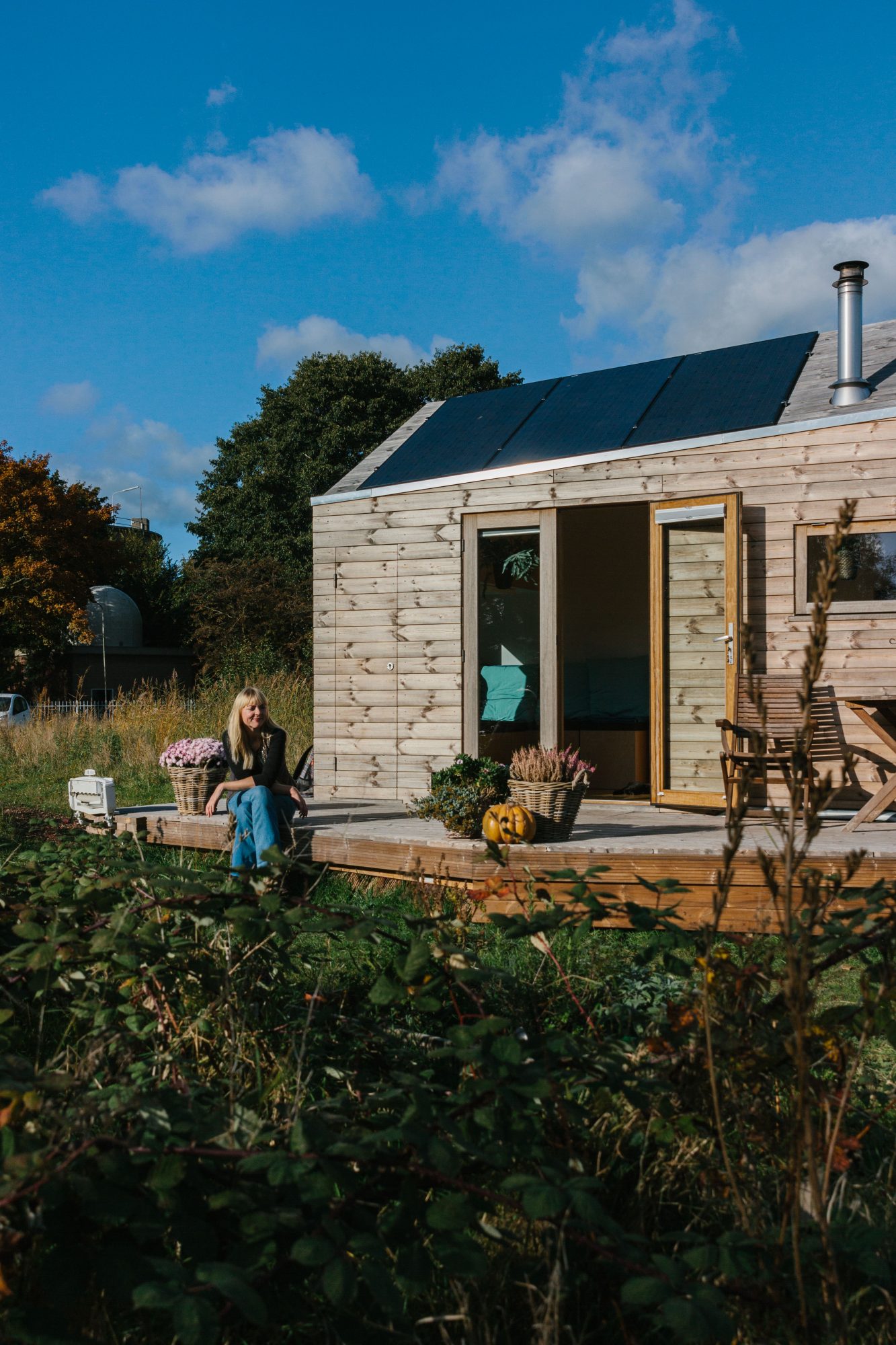 The fact that I go outside more often has nothing to do with the ‘limited’ indoor space. The past year thought me that I absolutely don’t lack space in my house. I have not felt claustrophobic for one minute, not even in the winter. I still love my house and enjoy it immensely, and haven’t regretted my decision to have a Tiny House built and live in it permanently. If you gave me the chance tomorrow to move back into a ‘normal’ house again I wouldn’t take it, not in a million years! I love it here. The location has a lot to do with that of course, it is such a heavenly place. But the house itself that was designed so ingeniously by the team from Walden Studio, taking my wishes into account and built with so much care and precision by Dimka Wentzel, really is the star of the show in this success story. 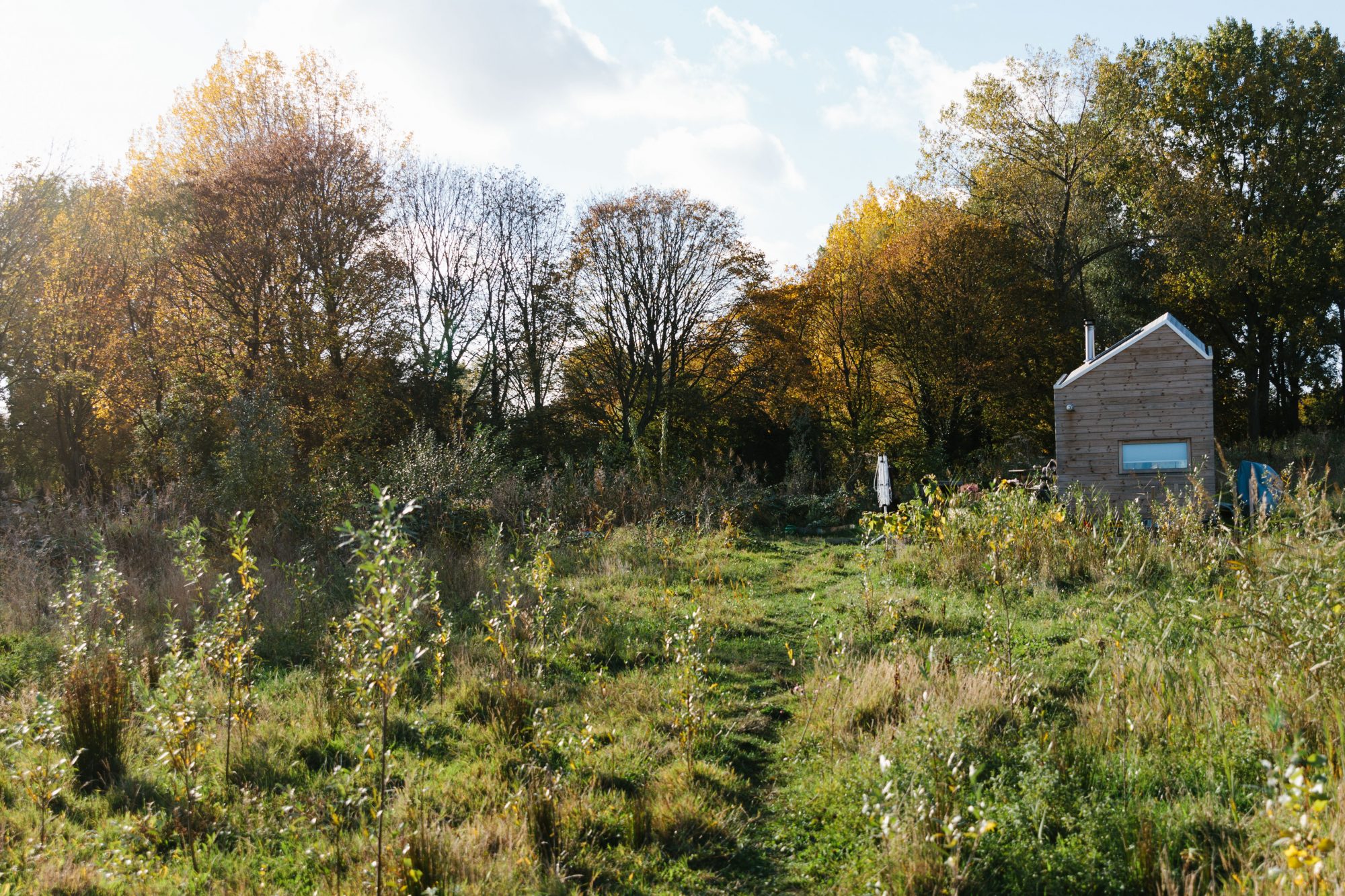 At the moment my water tank is empty, as you might have read earlier. The weather forecast has predicted only sunny weather and no rain at all. I shower at my friend’s place now. Thankfully I can fill my jerrycan at the neighbour’s place, the Gasfabriek. Without them I would not be living here, for which I am very grateful! The Gasfabriek is becoming a hotspot. The terrace is open every day and you can go there for a heavenly lunch or have some drinks with friends. Which is very convenient for my open house afternoons too, visitors can have a drink there before or after visiting my house. 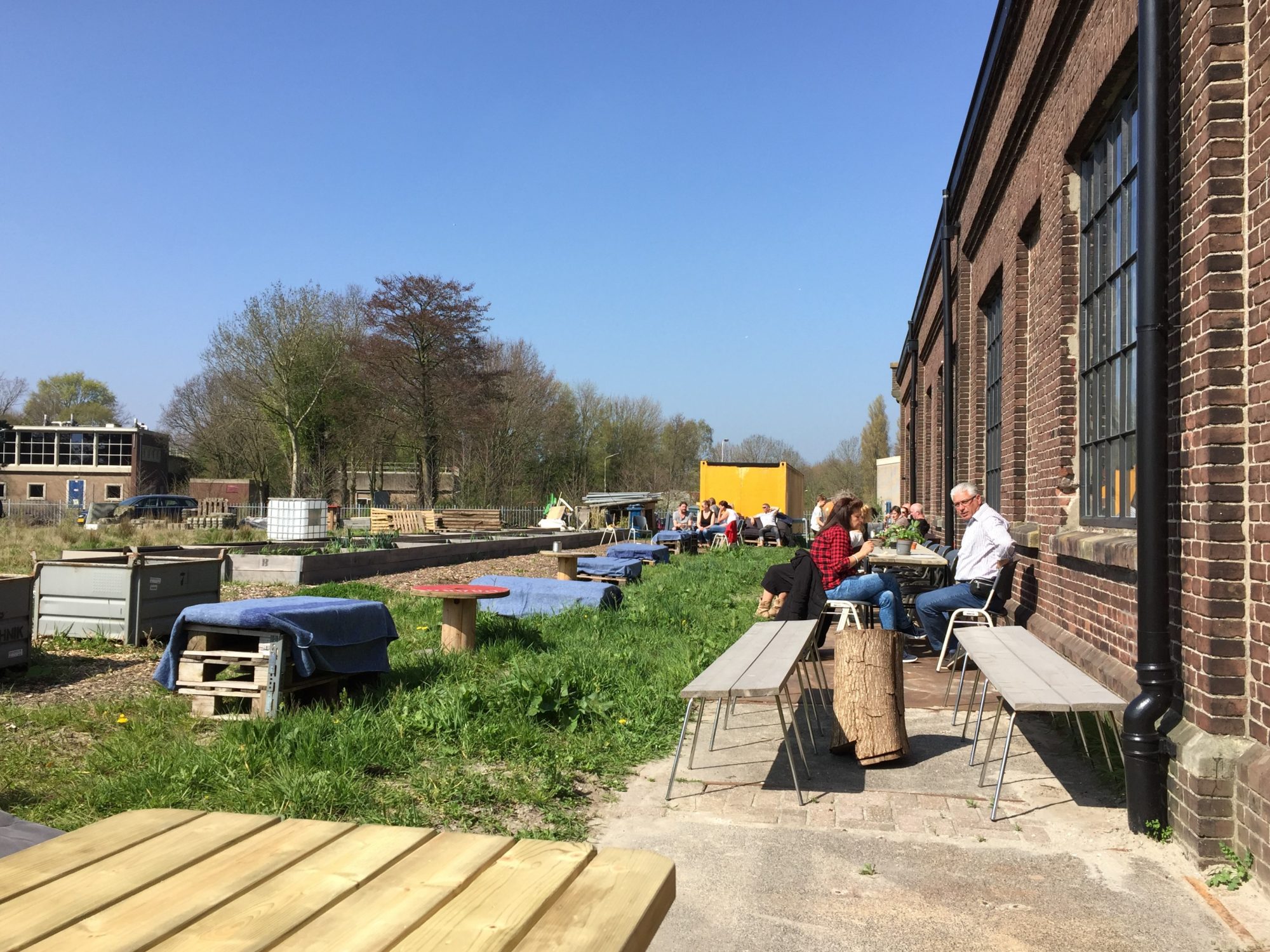 Oh yeah, these open house afternoons. They are born from necessity really. So many people came knocking unexpectedly and I received so many requests from people asking me if they could come visit to see my house, that I decided that a little organisation was required. I don’t mind doing it this way, once a month is just fine. I want to give people a chance to see a real, lived-in Tiny House up close. The enthusiasm remains enormous: about 50 to 75 people visit my open house every month. 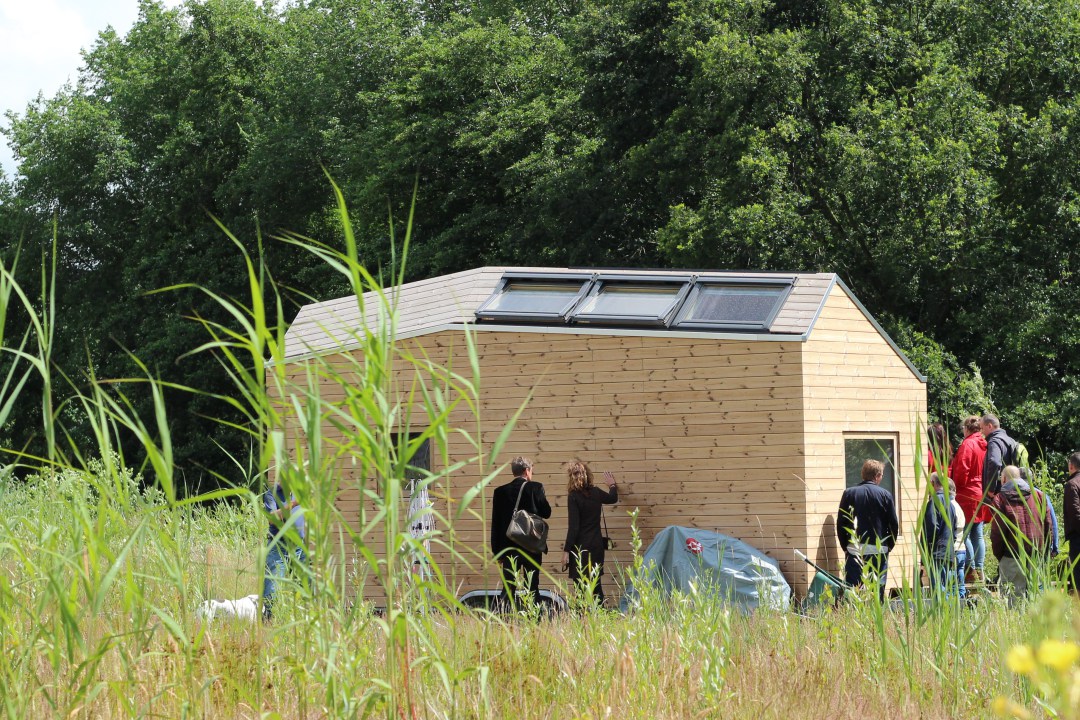 In November I became my own boss fulltime. I work from home now. It took some time getting used to that but I love it! I can follow my own rhythm and even though I work more hours than when I was  still working for a boss, I’m having a much better time with it. Besides giving workshops and lectures and providing counselling sessions, I do a lot of work for Tiny House Nederland. I don’t get bored for one second. The movement keeps growing and to be honest I did not expect otherwise. This year the first Tiny House pilot projects are starting up and about 40 Tiny Houses are being built right now, and that’s only counting the Tiny Houses that people are building themselves or having built by small contractors. Exciting times! I hope with all of my heart that the pilot here in Alkmaar may continue this year, it would be such a shame if we would fall behind at this point. We will just have to wait and see. 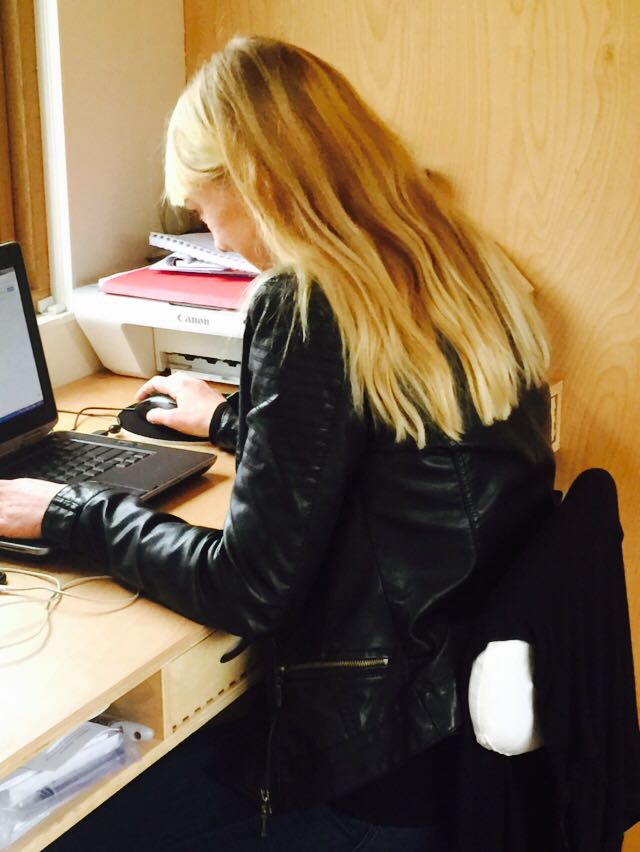 Ah there is so much more to tell, so much that has happened in a year. Most of it you can read in my blogs. I started writing a book as well, but that’s quite an undertaking and I find that I can’t free up the time that is necessary for it. Someday perhaps I will. But for now, on to my second year of living in a Tiny House! Did I become a happier person? Yes. But mostly, a lot more grateful. I am so enormously grateful for all that I was allowed to experience and all the new experiences I keep finding on my way, I get emotional just writing about it. I wish that for everyone and that is why I keep investing so much energy to make this beautiful way of living possible for other people as well. It will get easier, there is so much progress. Together we can achieve so much, with a positive attitude and a go-getters mentality. Go go Tiny House movement, we’ll get there! 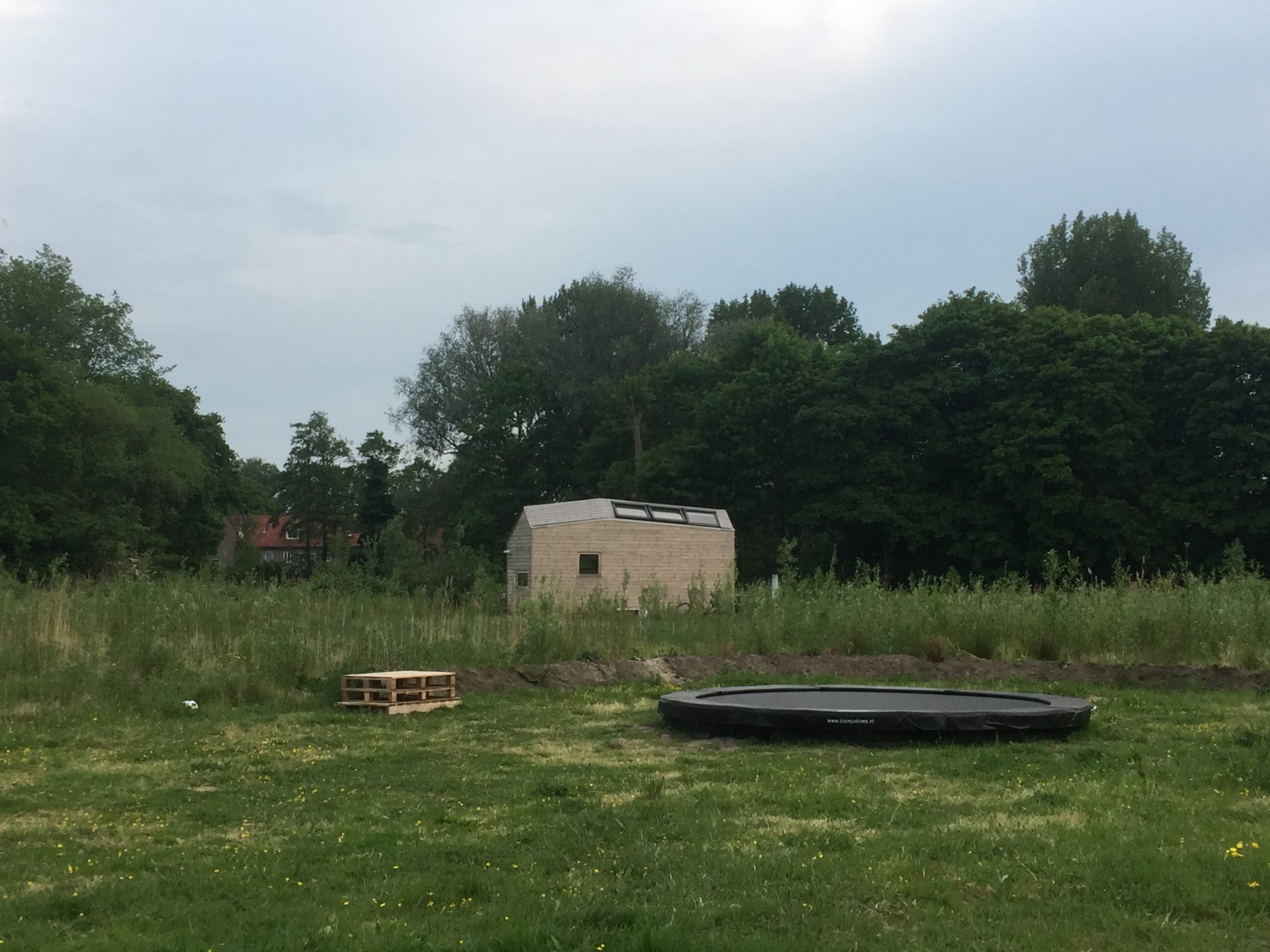 Cleaning a water tank, 101 Workshop: make your own soap!