Ever since I’ve been living in my Tiny House in Alkmaar, my house has received a lot of attention. That means unexpected visitors at unexpected times. At first I had strangers at my door on a daily basis. They had read about me in the paper or had heard me on a talk show. In order to make things run smoothly, and to maintain some peace and privacy, I started with monthly open houses and put a sign at the beginning of my garden path explaining that I have an open house once a month and at other times only receive visitors with an appointment. 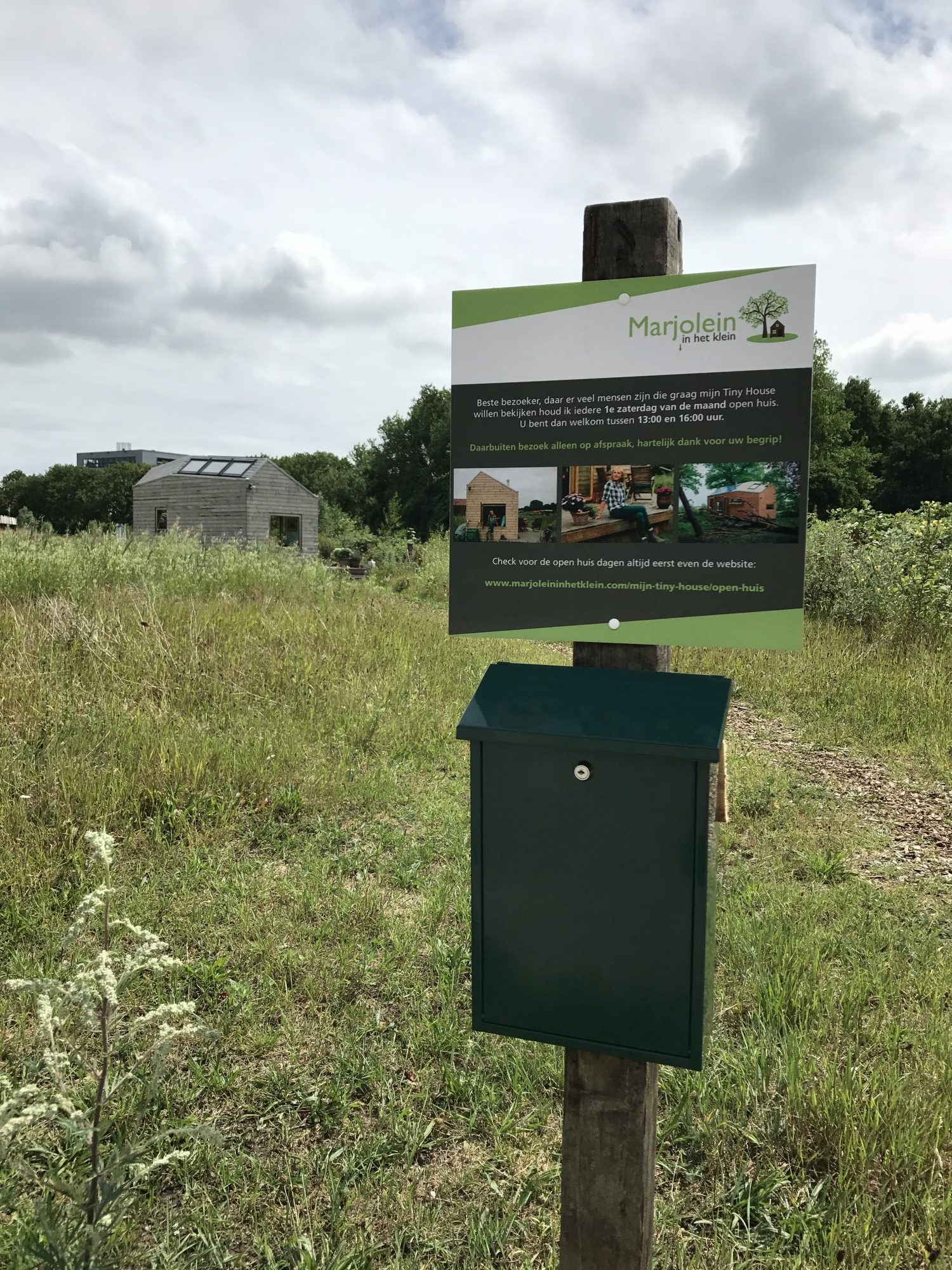 That really helped a lot. People would walk up to the sign, read it and turn around again. Although there still were a few people who thought I could surely make an exception for them. But ultimately, people started to appear at my house again, standing in front of the door or walking around the house. I would be sitting on the deck, or working at my laptop and hear ‘Hi there!’. At that point I explain to them in a friendly manner that there’s an open house every month and ask them to come back, and that I’m happy to answer all their questions at that point. Unfortunately that doesn’t stop most people from firing their questions at me anyway… 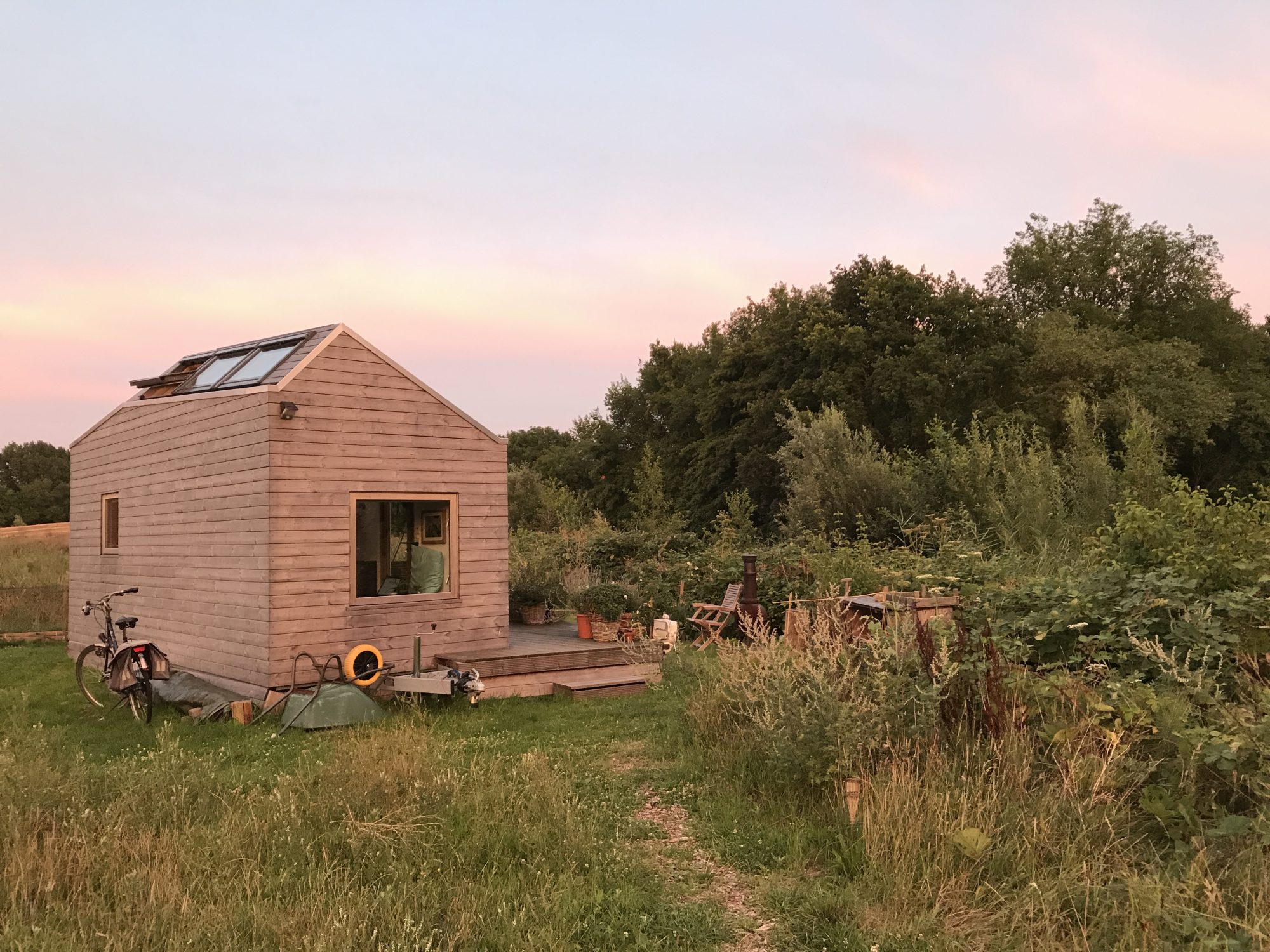 I keep my garden tidy. For me there’s quite a clear difference between my hired piece of land and the wilderness next to it. But apparently this isn’t obvious to everyone else; people think it’s justified going straight through my garden. ‘Oh, I just want to look around a bit!’. Children whose parents are having a party at the Gasfabriek are running through my yard, men going fishing walk straight across because it’s convenient. People are pressing their noses up against the glass and peeking through the windows. As you can imagine, at some point, this becomes really unpleasant.

A food truck festival will be held here soon, and the entire plot will be mowed. I think that’s very sad. The bees and bumblebees love it here and it’s already hard enough for them finding enough food. It’s a good thing we agreed that the wild zone of blackberries and teasels will remain unharmed. Fences with bulrush will be placed around my house. During the festival I’m away on vacation, but I have friends staying in my house. I’ve made clear agreements with the organisation and I hope things will be ok. But when the entire field is mowed, it’s even less clear where my land is. 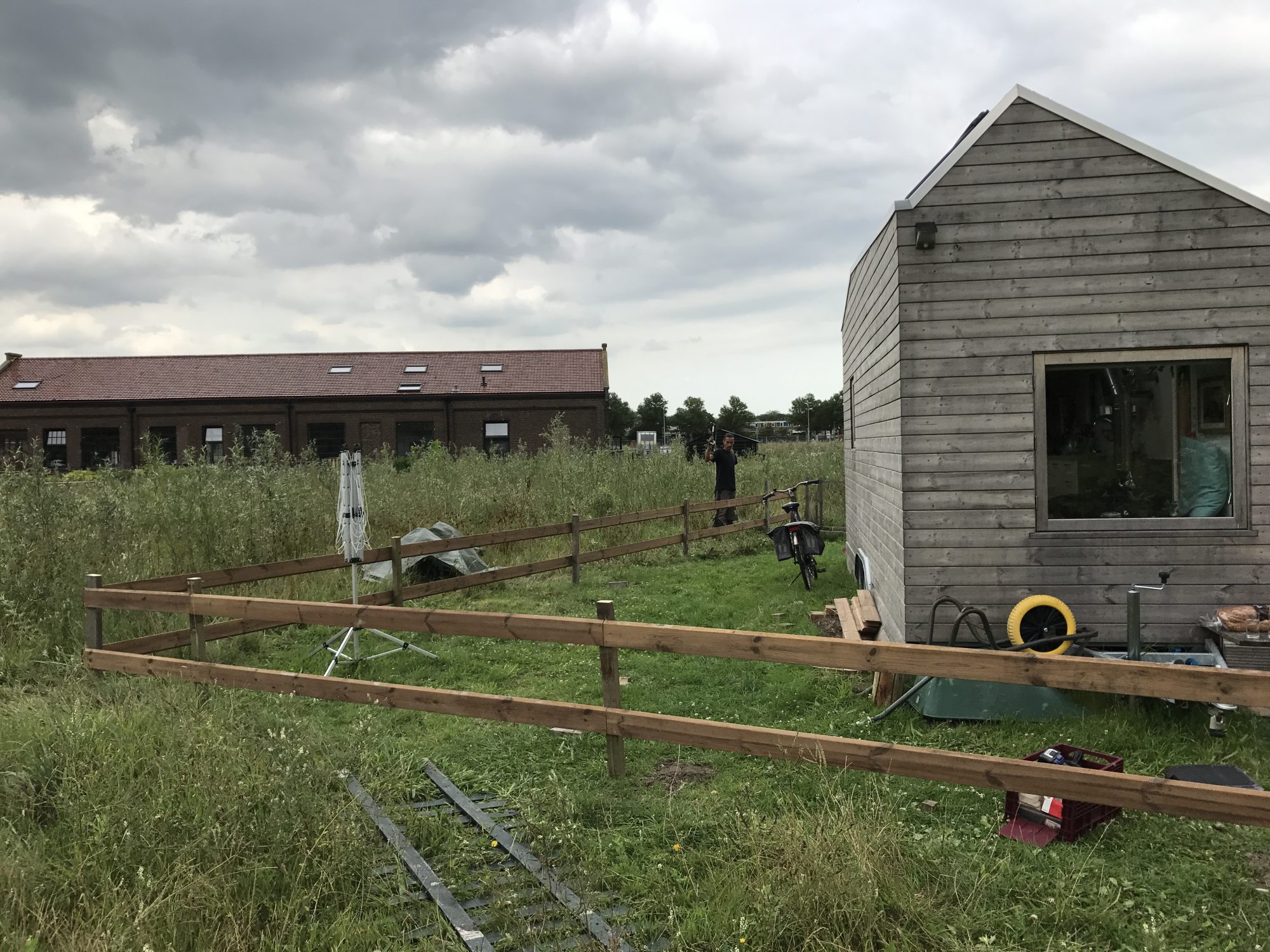 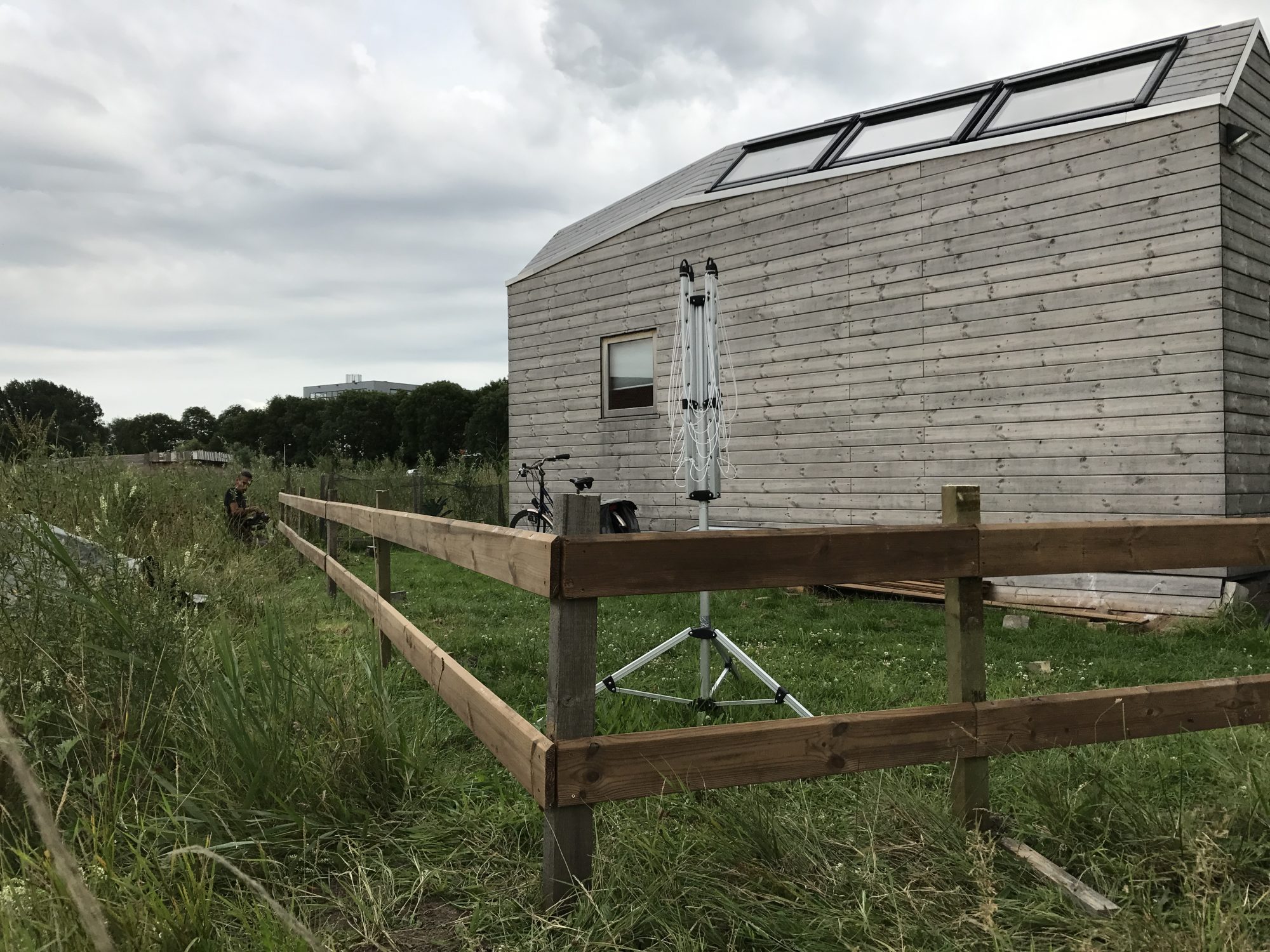 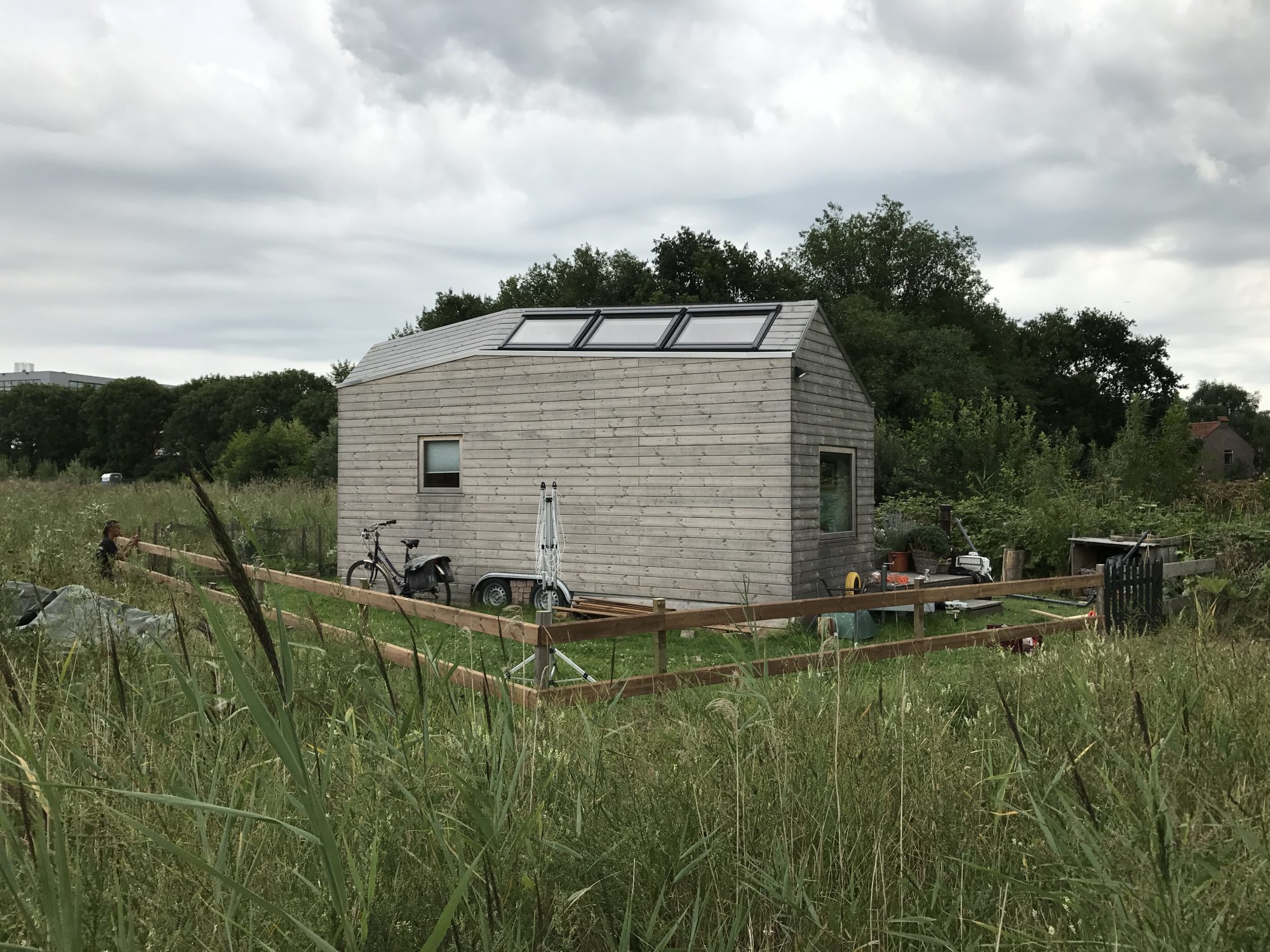 I thought about it long and hard. I’ve postponed the decision several times, but now I’ve placed a low garden fence around my house. I know you probably think it’s a shame. It doesn’t really yell ‘Freedom’ anymore, does it? Is marking your territory really necessary? Well, unfortunately it is. I’d have preferred otherwise, but apparently setting boundaries is a necessity. Don’t worry, it’s not a high fence without gaps – something I despise when it comes to Tiny Houses. And there won’t be any paving either. I’m going to plant climbing-plants around the fence so it’s going to be gorgeous. And you know what, this feels so good! It makes me feel at ease. I’ve made it clear now. This is my piece of land. This is where I live. Once a month you are more than welcome to visit that land and my house, and otherwise you’ll need to make an appointment. That way I can go on working and living in my Tiny House. 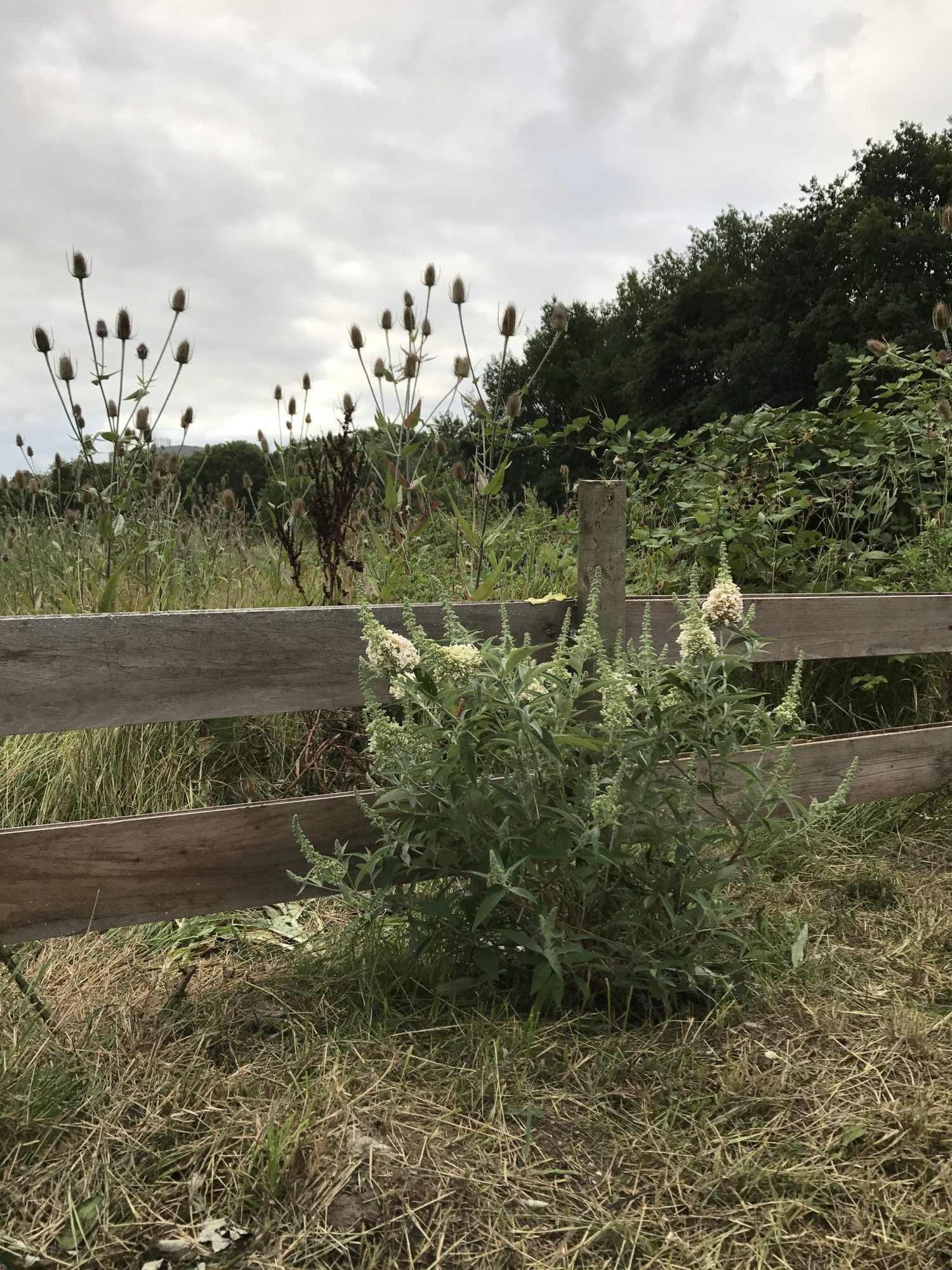 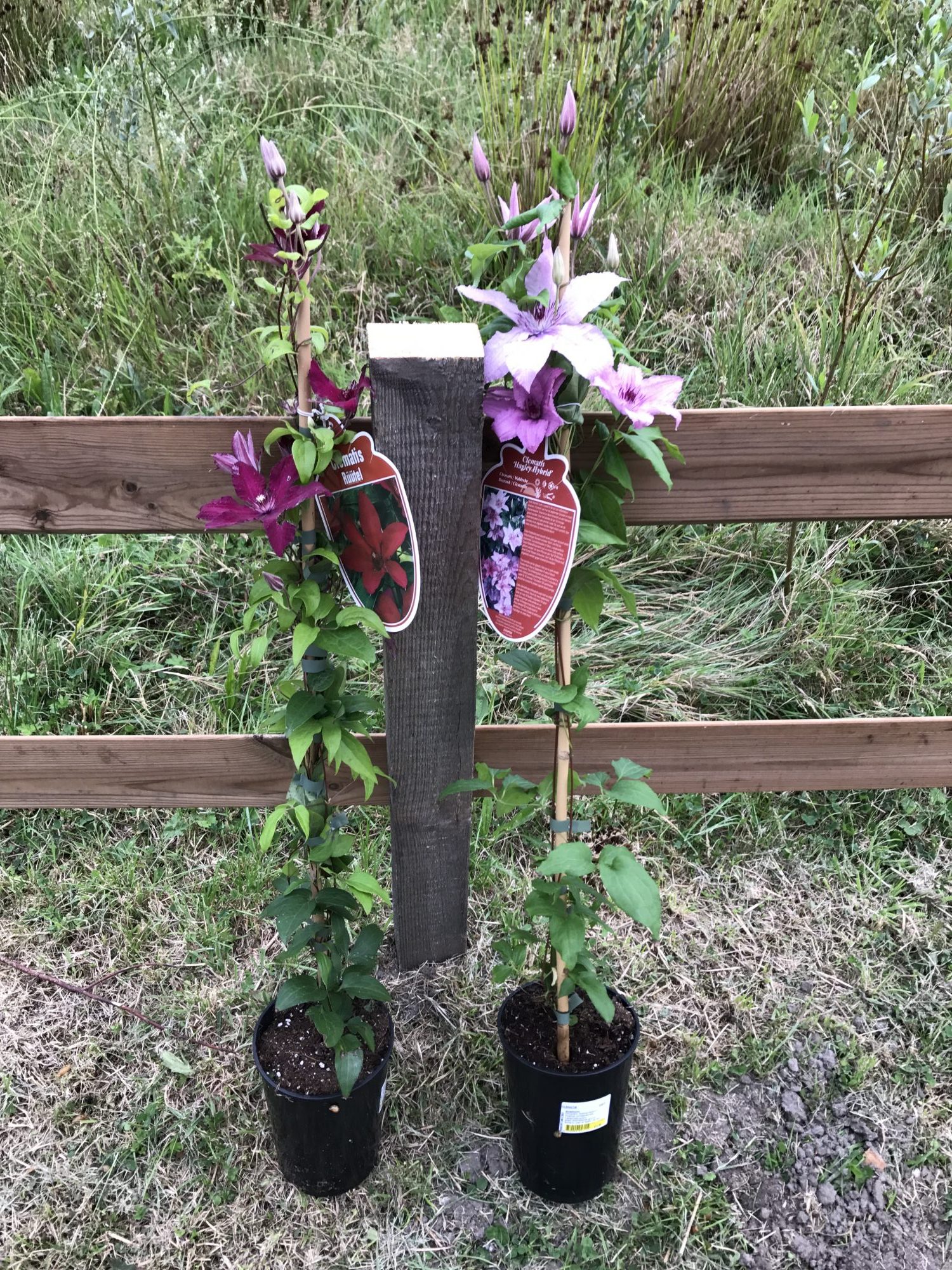 Setting boundaries is something that I’ve had to deal with several times in my life lately. Apparently I still needed to learn something about that, but I’ve made some progress. I see this garden fence as a nice symbol of my personal growth in this matter.

I really want to put Raymond from the Urban Earthship in the spotlight; he made my beautiful fence. He’s a sweetheart. You don’t often find people this generous and willing to help out. Thanks a bunch, Ray! Together we’ve put up a ‘Food is Free’ stand here, where we share our surplus of vegetables. Nicolette from the Gasfabriek also contributes to this stand. If you’re in the neighborhood, come and take a look! You can pay what you have and want, or don’t pay anything if you don’t want to. Only the blackberry jam that Raymond makes has a fixed price. Doesn’t that make you happy, a stand of abundance and love? If everyone would dedicate a small piece of their garden to growing vegetables, and shared their surplus crops, that would be so great! It’s healthy too, you know, digging in the dirt sometimes. And it’s so good for children to see how vegetables grow, how a little seed grows to be edible fruit! 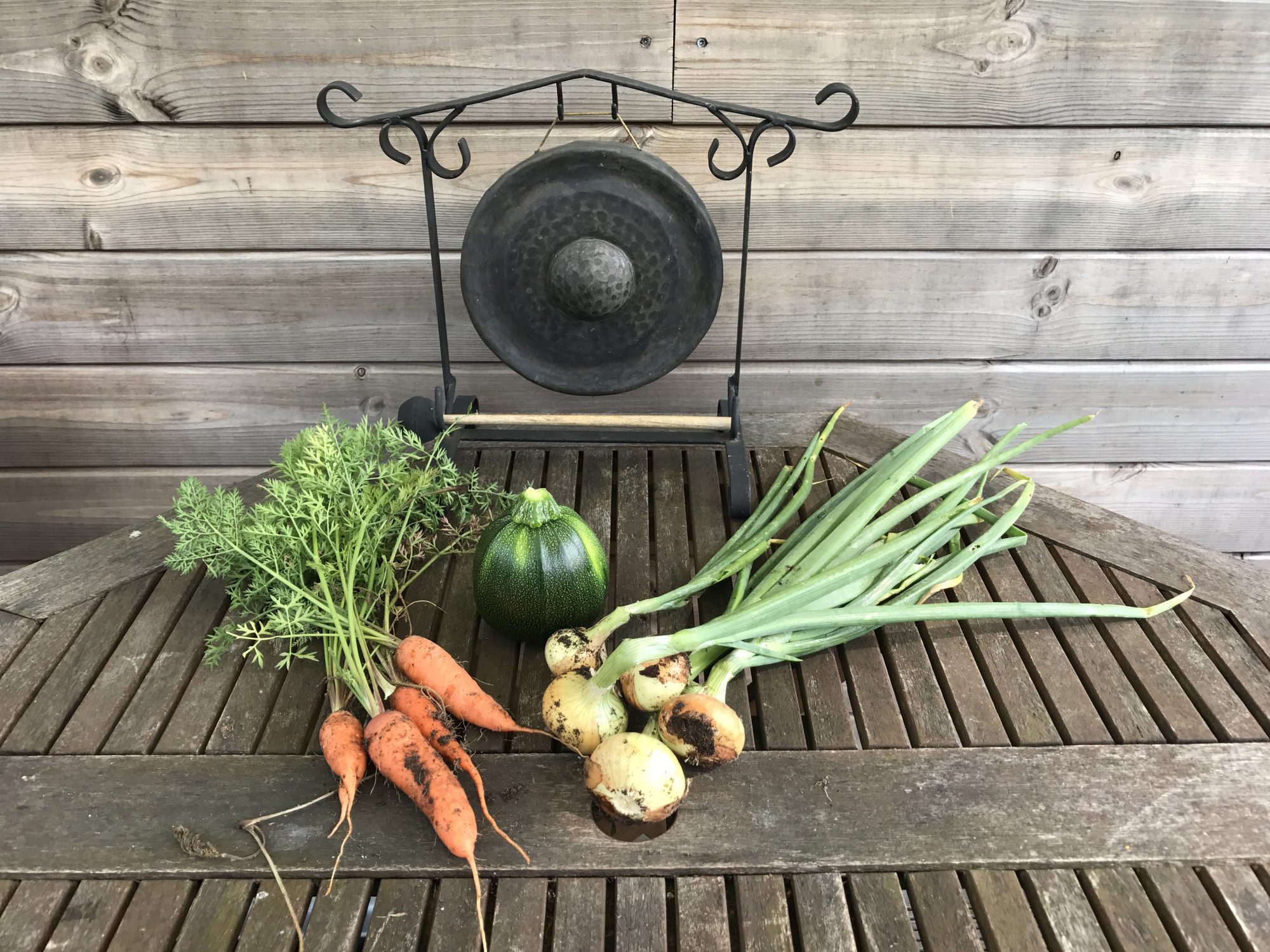 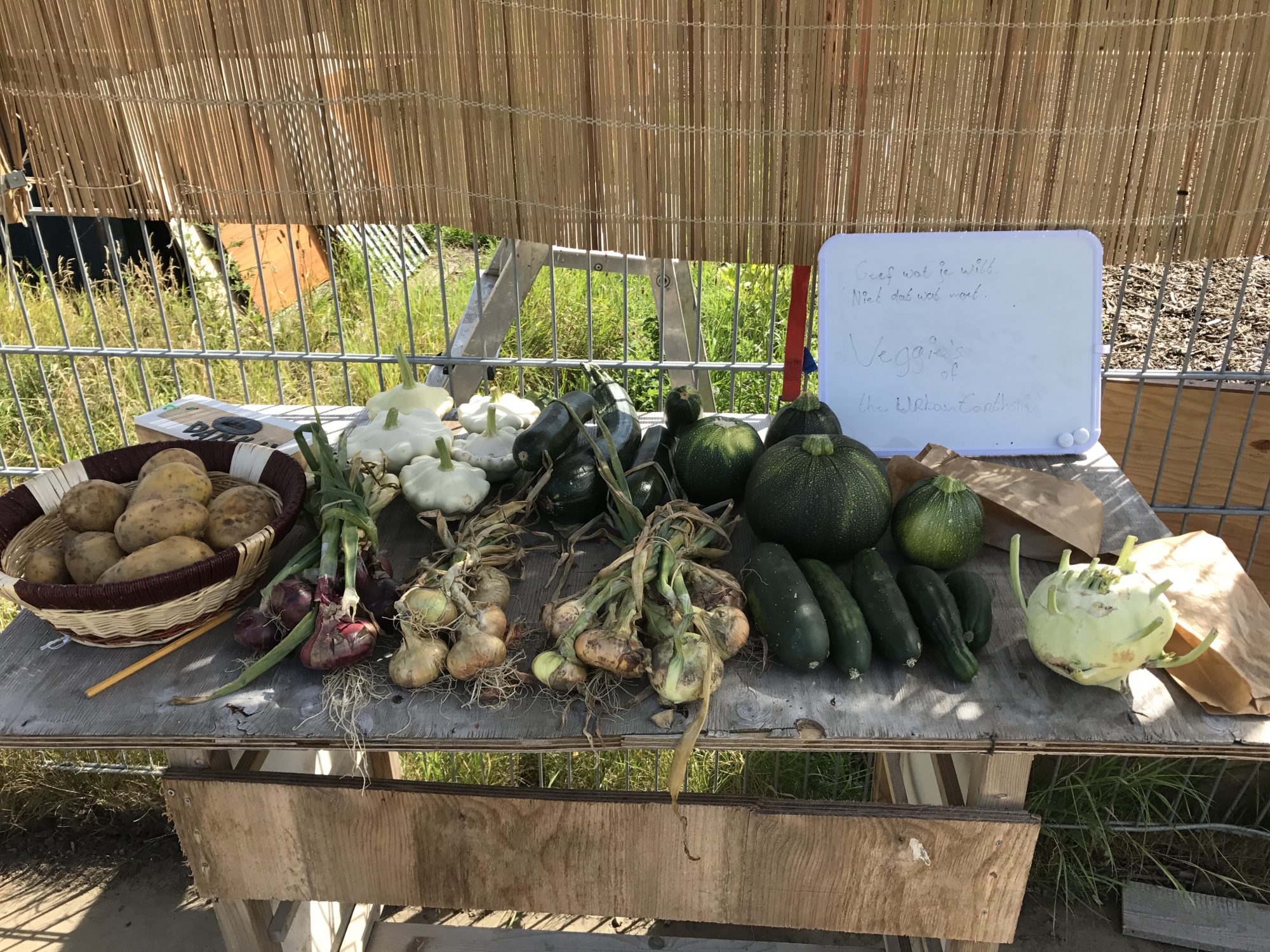 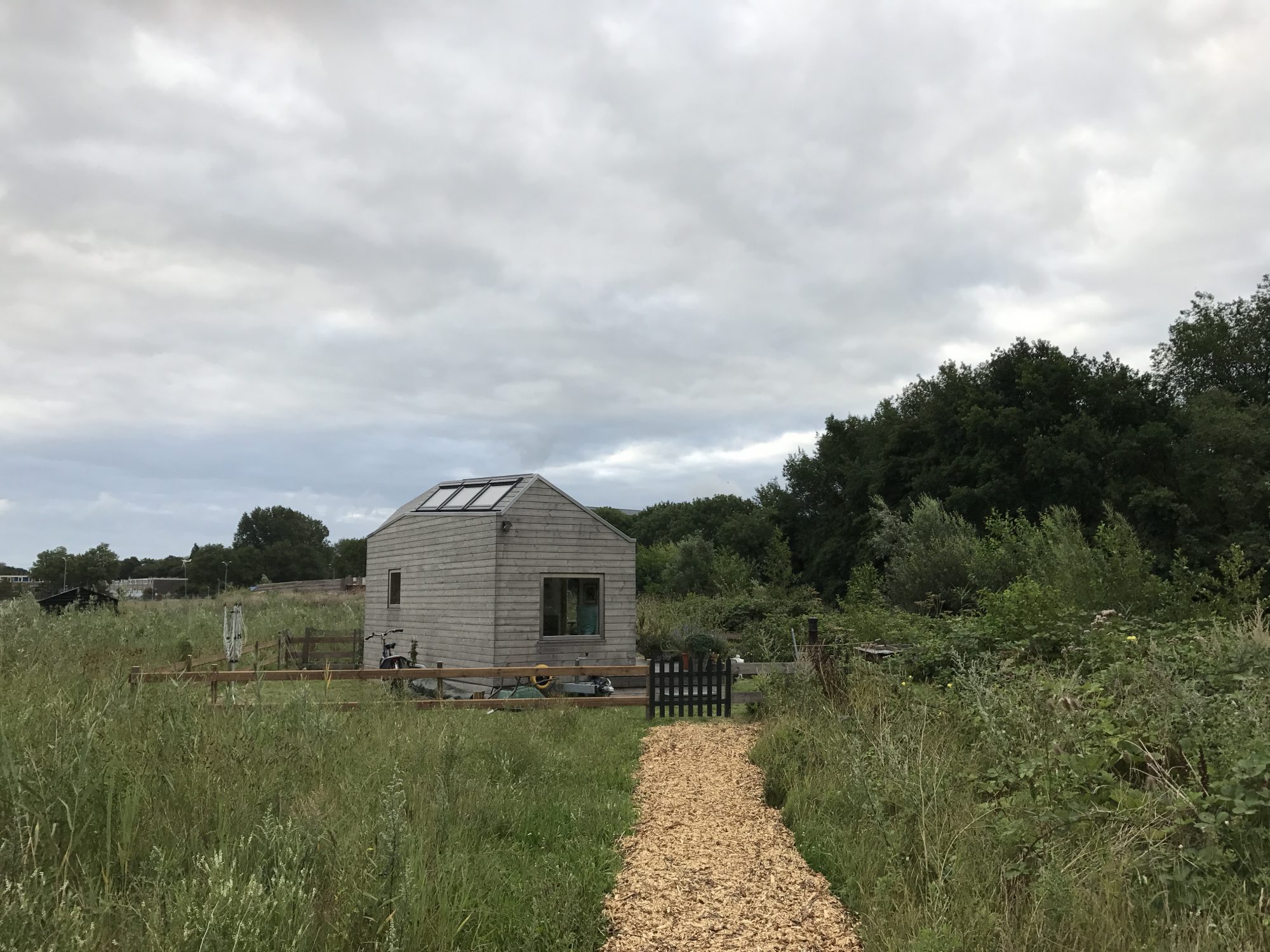