If you ask me, keeping chickens is an indispensable part of the Tiny House lifestyle. Ok, everyone should decide for themselves of course, but I’ve always wanted to keep chickens. And have a vegetable garden and a herb garden. Chickens are so much fun! It makes me happy, watching them scratching the ground. And now I have my own chickens in their own coop, another dream fulfilled! 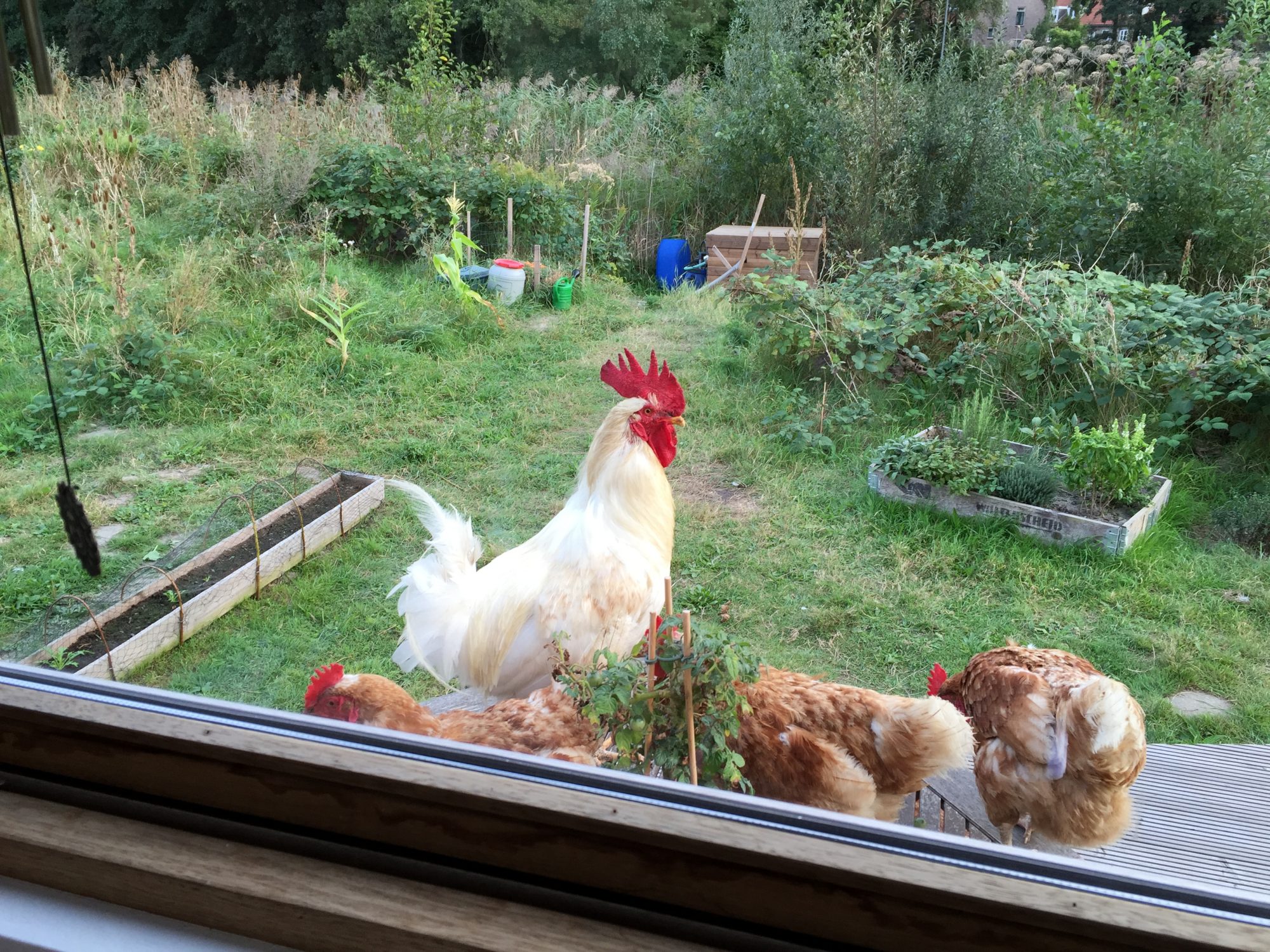 When I just moved here, de Gasfabriek got a huge chicken coop and Nicolette from the Gasfabriek got a beautiful big white rooster and a couple of hens to live in the coop. We took care of them together and I really enjoyed it when they came to scratch the ground around my Tiny House. Unfortunately, that free roaming turned out to be a less than good idea. Some people walk their dogs on the terrain and when for the second time one of the hens got killed by one of those dogs, we decided they were better off in their coop. So they got to go outside under supervision. But the hens were pretty big and the coop turned out to be too small. Besides, the ground got really muddy this autumn. So we decided they were better off on an actual farm. We found a perfect place for them at the biodynamic social care-dairy farm De Buitenplaats in Enigenburg. Thanks so much, Inge and Bram, for taking them under your wings! But I did miss them, especially that beautiful rooster… 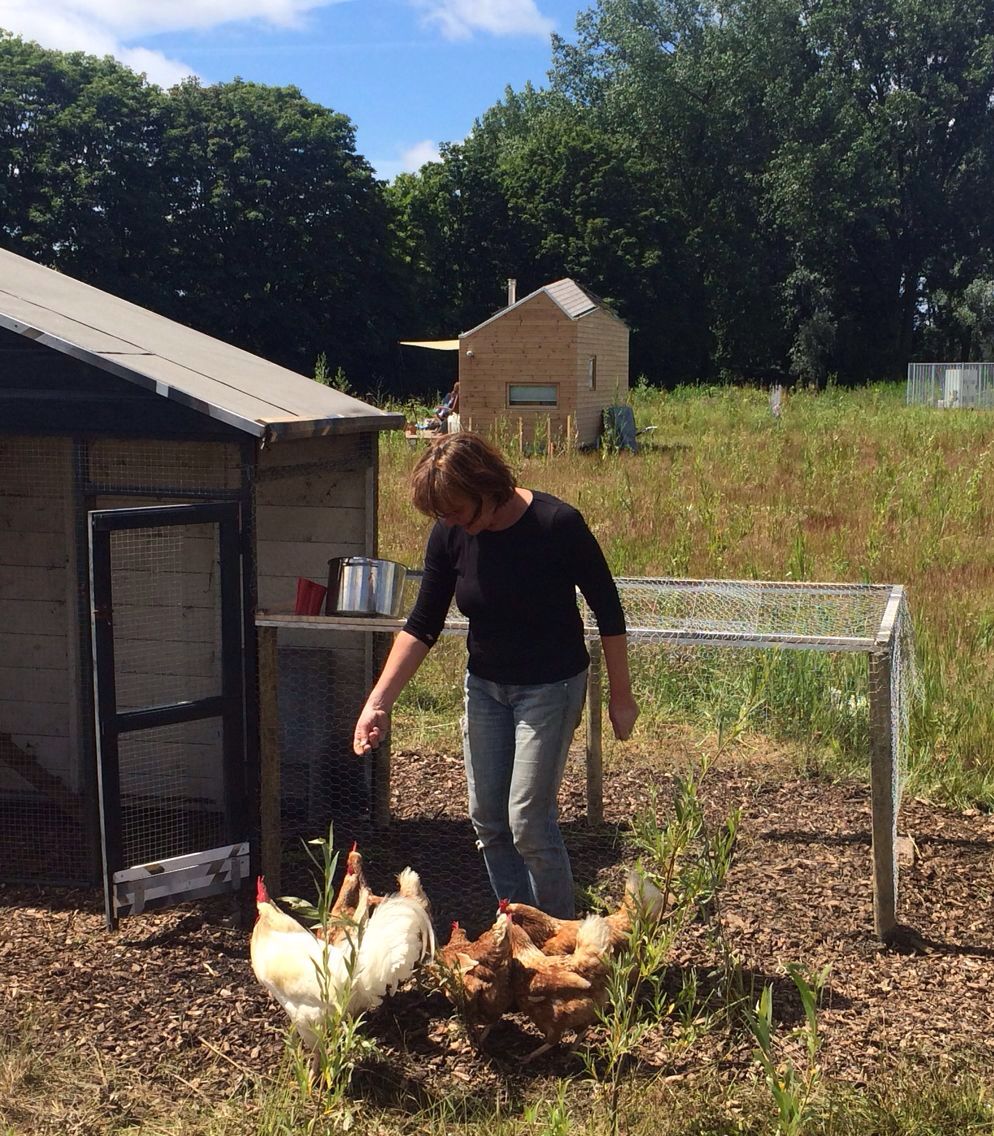 Nicolette  is feeding her chickensn 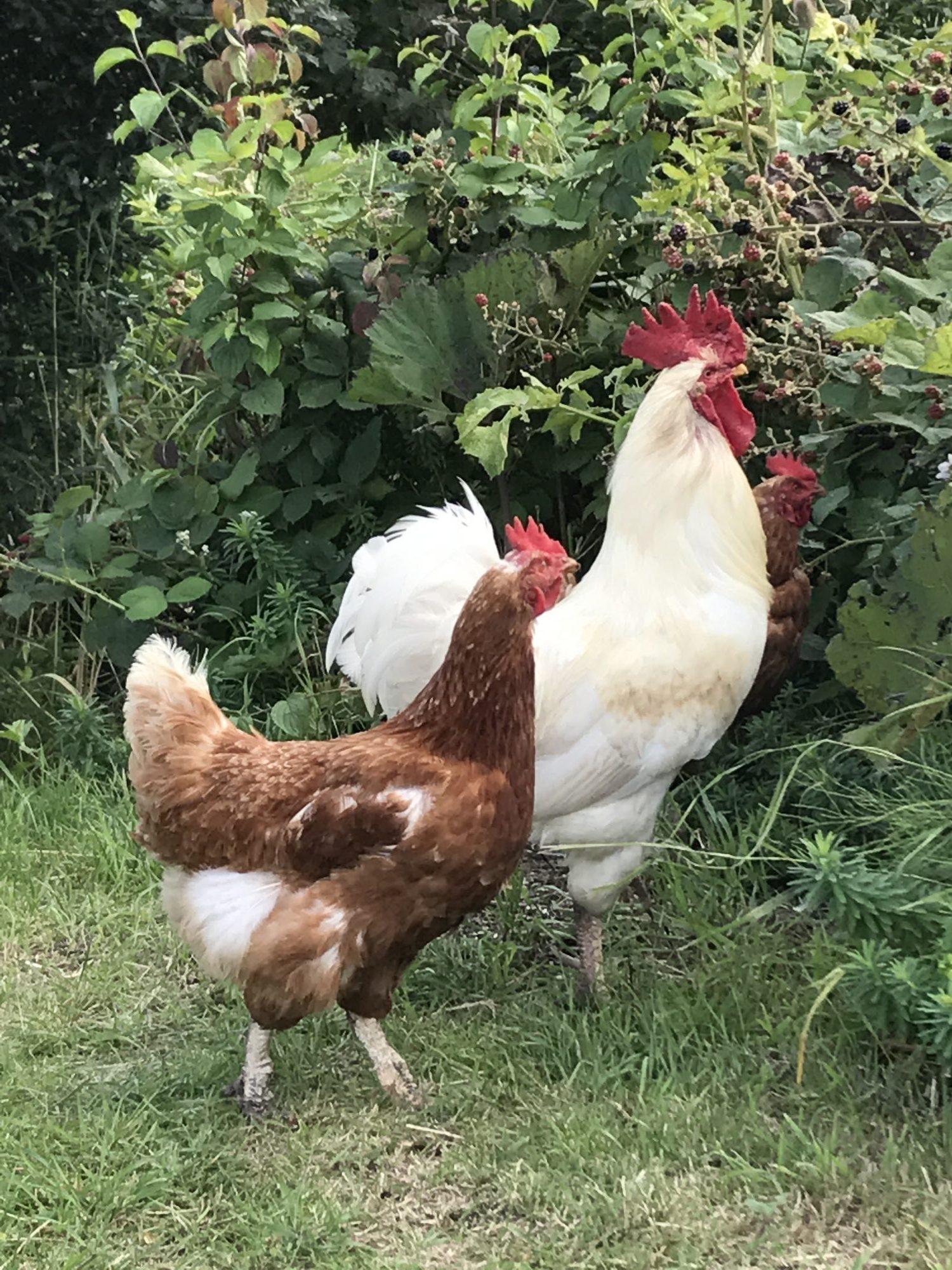 In the meantime, my neighbors from the Urban Earthship decided to keep some chickens –  dwarf hens, that is. And what started out as a little bunch, slowly grew to be a whole flock of chickens. Herd of chickens? Well, a lot of chickens anyway ;) Two of them, a cute couple – rooster and hen – started to come by my house to look for food. I happened to have a barrel of grain around, for the Muscovy ducks which I feed every now and then. So when I did, they got some too. It got to the point where they came around every day; the rooster even started to crow in front of my door! I figured I’d better give them a decent home then. I looked through Marktplaats for a second-hand chicken coop and Madeleine from the Earthship and I agreed that I would adopt the chickens. So cool! It made me so happy. 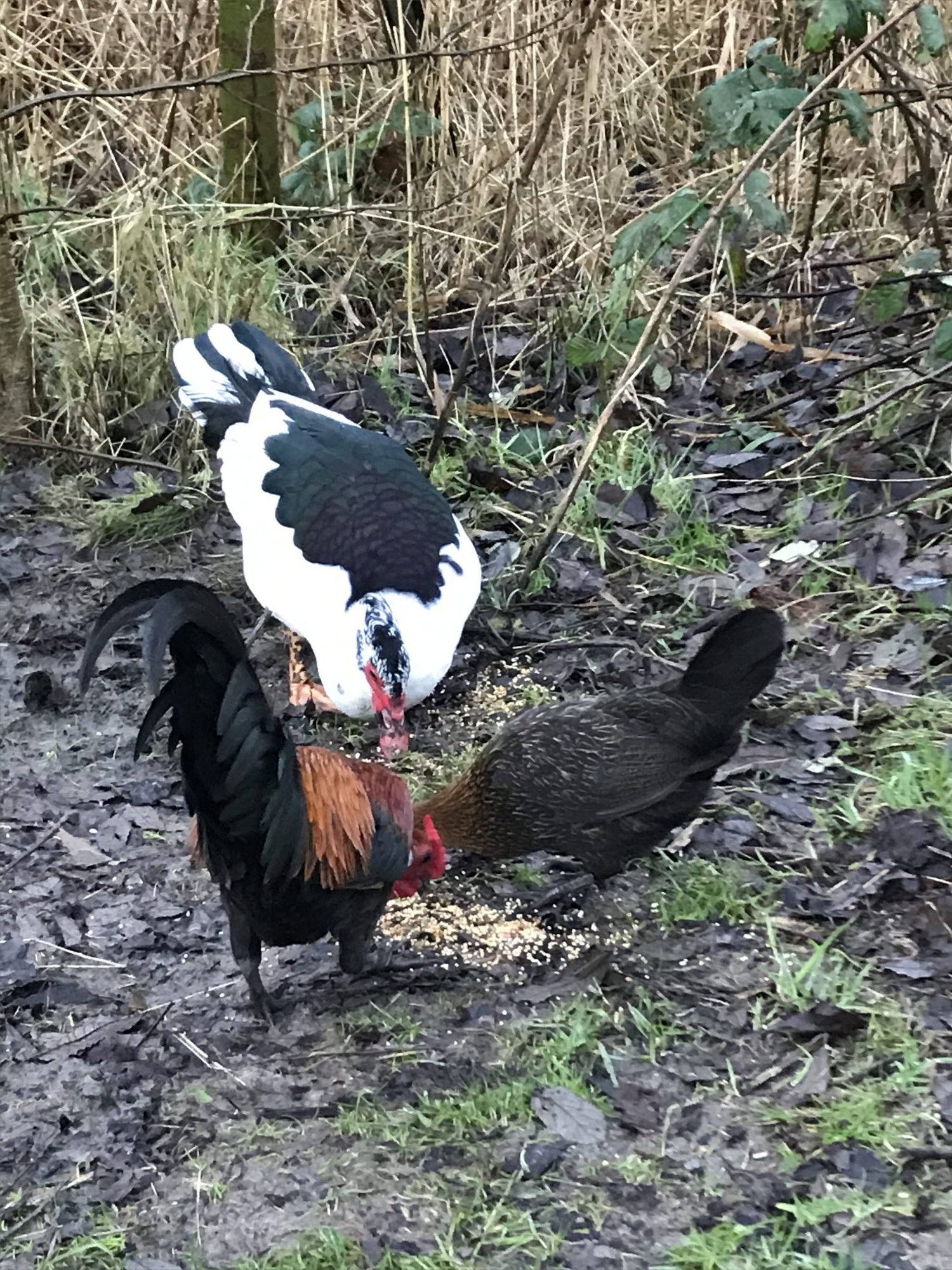 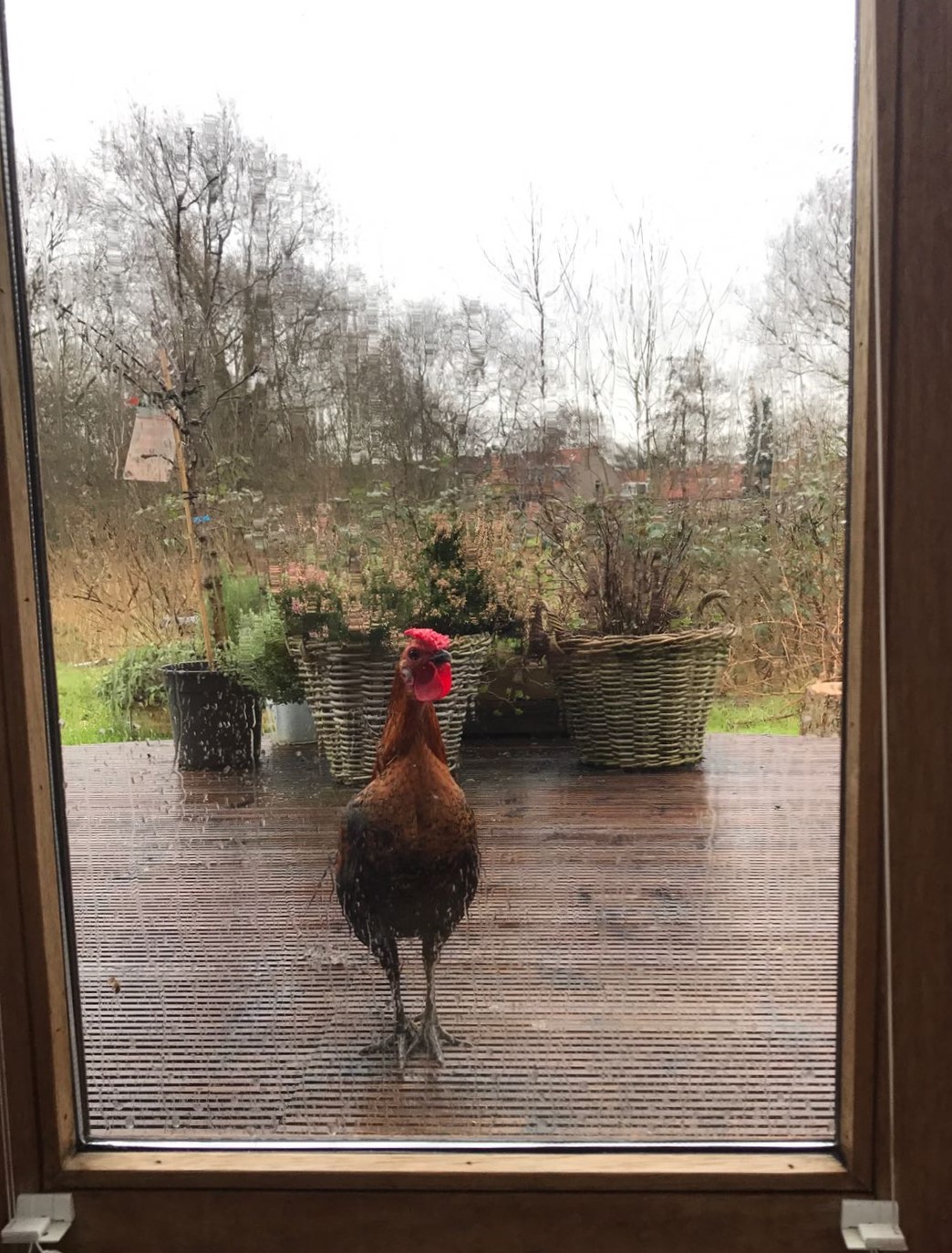 Andre from Fablab de Kaasfabriek (cool place by the way, if you like technology and 3D printers!) was kind enough to pick up the coop with his van, and the chickens were brave enough to eat their feed in the coop after only two days, so I could close the door on them. Yeeeaah, I got my own chickens! They weren’t as excited of course, being locked in a cage after having the luxury of freedom. But don’t worry, it’s only temporary. Once they get used to their new home they’re allowed to run around freely again. Of course, we need to beware of the dogs. Isn’t it a lovely coop! It goes well with my own house, don’t you think? And what do you know, on day two the missus had already laid me an egg. She must be content with her new home! 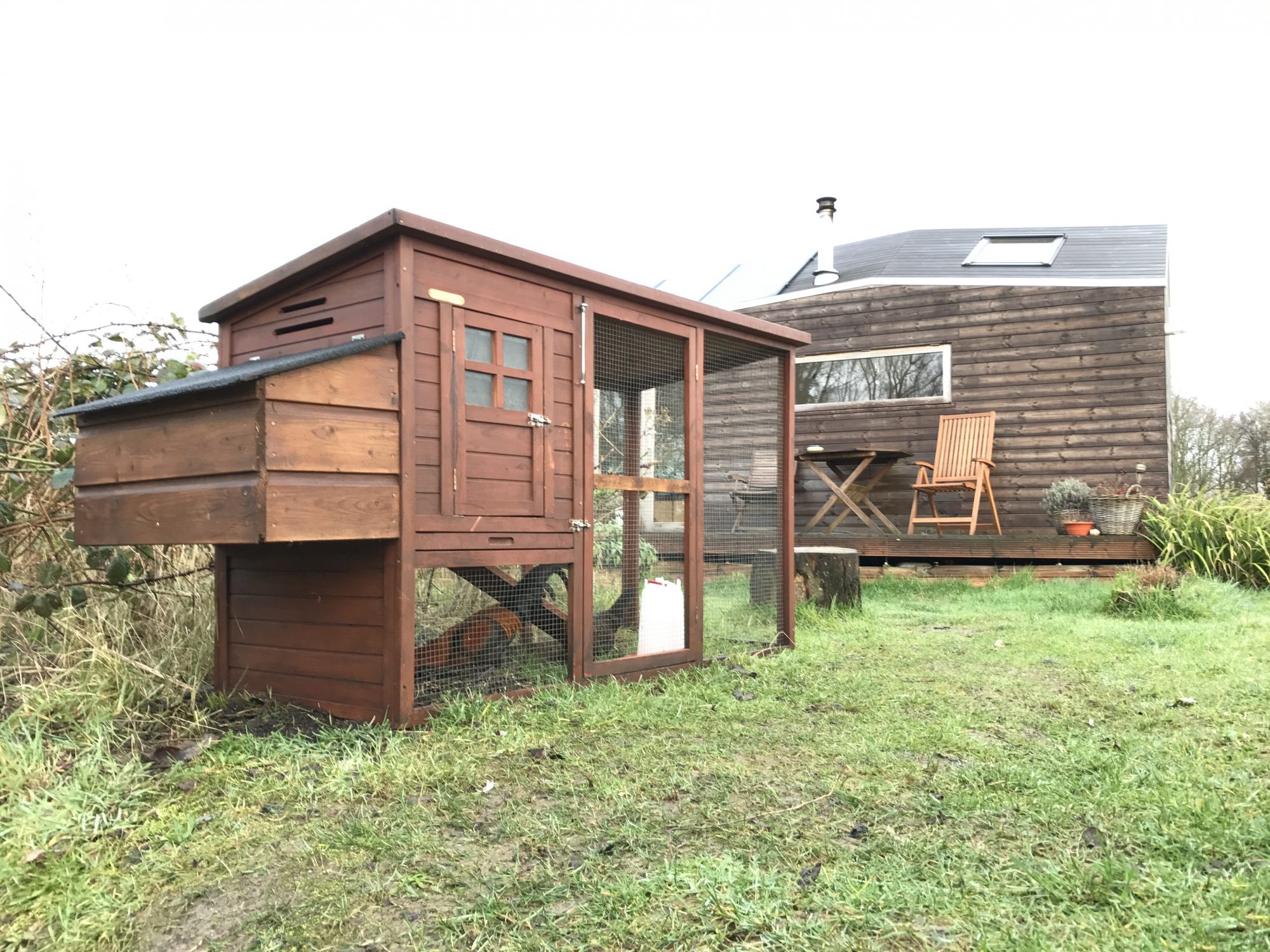 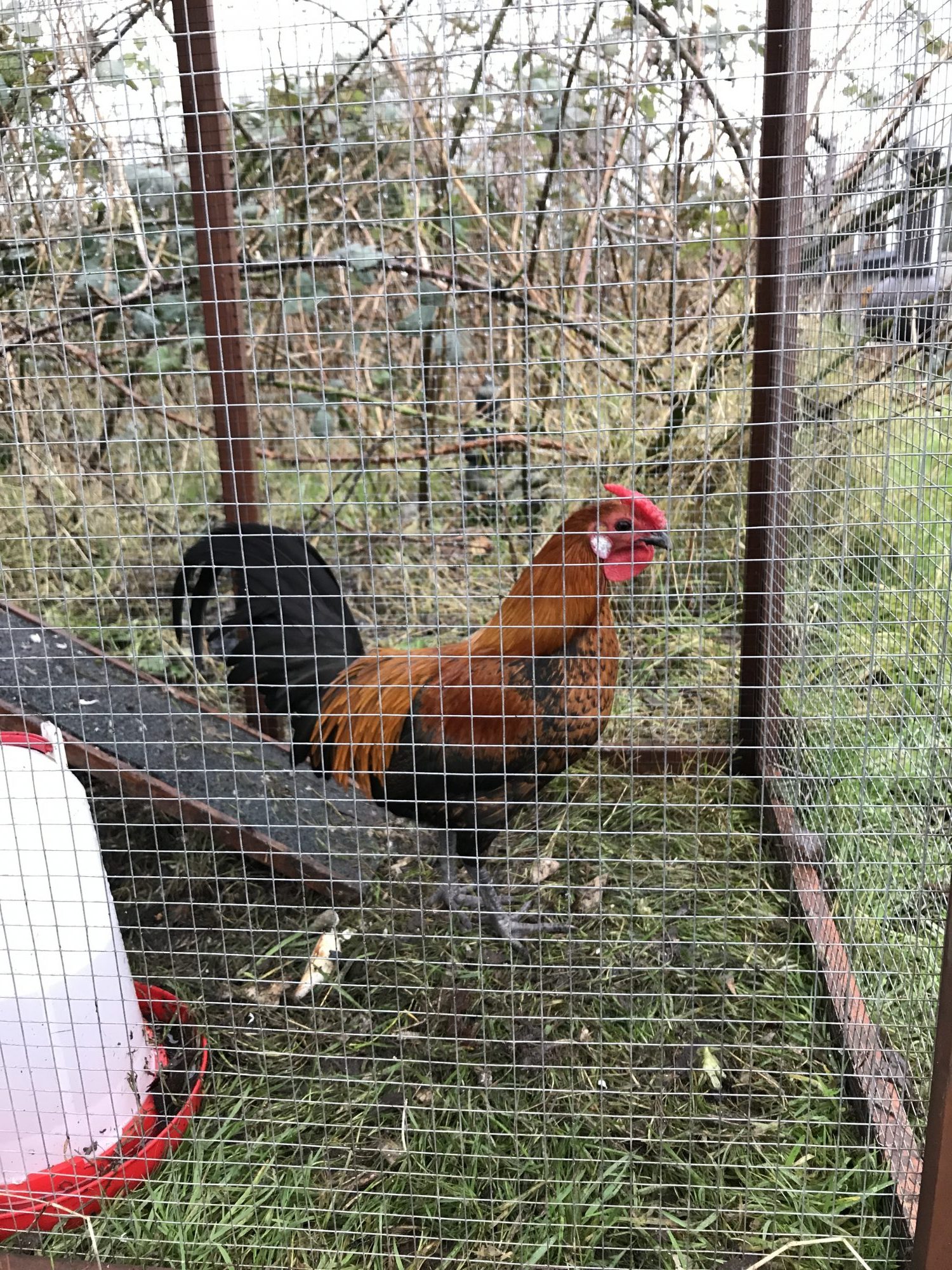 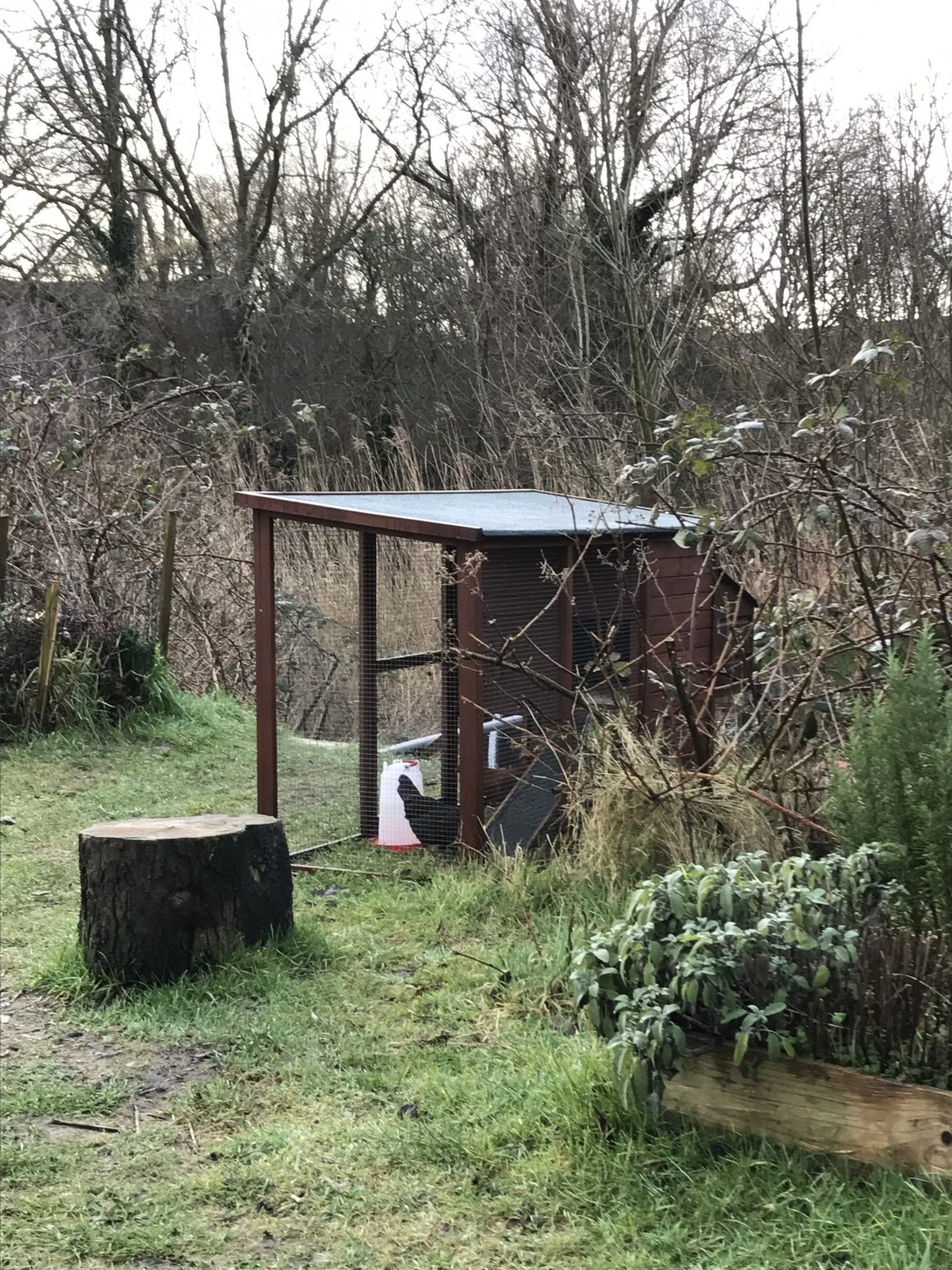 Last week I got some laying mash to go with the grain I already have and at the Welkoop I learned something new. It turns out that chickens and birds in general, eat gravel and pebbles to help them grind their feed. They obviously don’t have teeth, so the pebbles help grind the grain in their stomach. Who knew! I didn’t. But, when they’re in a coop and can’t roam freely, you apparently need to supply those pebbles or gravel because they can’t go out and find it for themselves. So I bought a ‘picking-mix’, which has ground oyster shell together with the gravel, which provides strong eggshells. Now they have to stay super healthy and lay beautiful eggs! Well of course only the missus lays eggs. But 6 dwarf eggs in a week is enough for me. I would love it if they started to nest at a certain point. But on the other hand, there are more than enough of them at the Earthship ;) Maybe I need to add another hen to this couple; one hen for one rooster isn’t much. But they’re so close and if they do start to nest, another hen wouldn’t be a good idea since she might attack the chicks. Oh well, we’ll see. I’ll leave it as it is for now. I have chickens, wow! Because as you now…tiny chickens…big fun!

Tiny Houses for all ages If I were allowed one wish