For my Facebook followers who don’t like chickens: I’m sorry! These last days a lot of pictures and texts starring chickens have crossed my Facebook page. Most popular were pictures of the chicks sitting on my head. I’ll cut down on the chicken nuggets from now on, I promise. But just in case you missed the whole thing: here’s an update :)

As you may have read earlier, I adopted a hen and rooster from the Urban Earthship. I called them ‘meneer de Haan’ and ‘mevrouw Hennie’. Unfortunately, Hennie suffered from an inflamed crop and didn’t survive, despite the good care of vet Claire from Dierenarts Noord-Holland. After she died, meneer de Haan was so upset, he just roamed around the terrain not knowing what to do. And at a certain point he only came to my Tiny House in the morning to get some food. 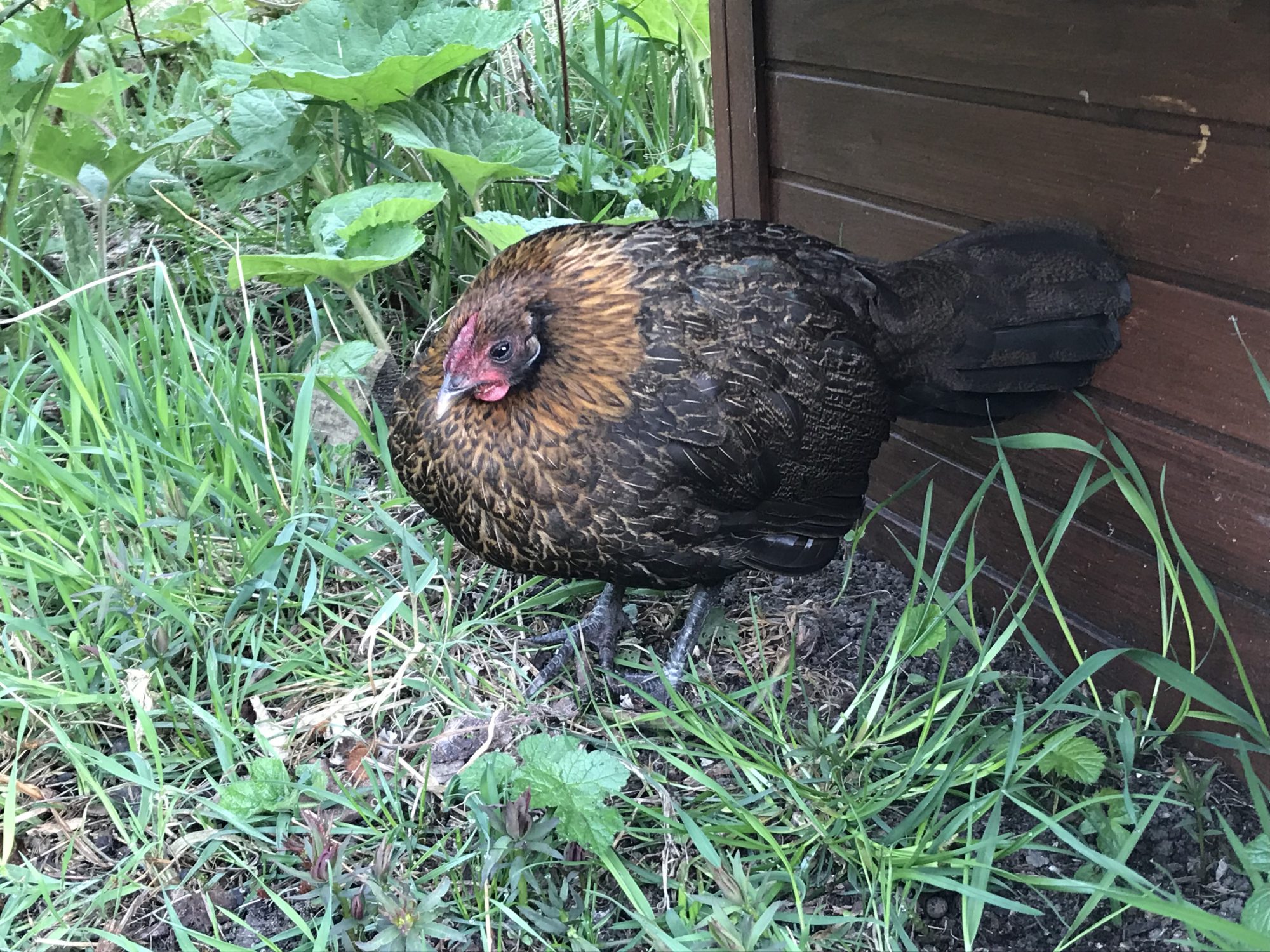 I was sad about losing Hennie. A rooster on its own seems a bit sad too, so Raymond brought me two young white chicks the other day. A silkie chicken and a leghorn (I’m not sure about the second one, but I was told on Instagram ;)) Two hens to keep meneer de Haan company, that should bring him back. It’s just…it turned out to be a hen and a rooster instead of two hens! What to do? Return the rooster? That would mean the end of him; roosters have it hard in our society. Maybe it was meant to be that he was here? After a lot of thought I decided to keep him. Meneer de Haan had obviously decided to go back to the Urban Earthship. But, one hen for one rooster is a bid sad… 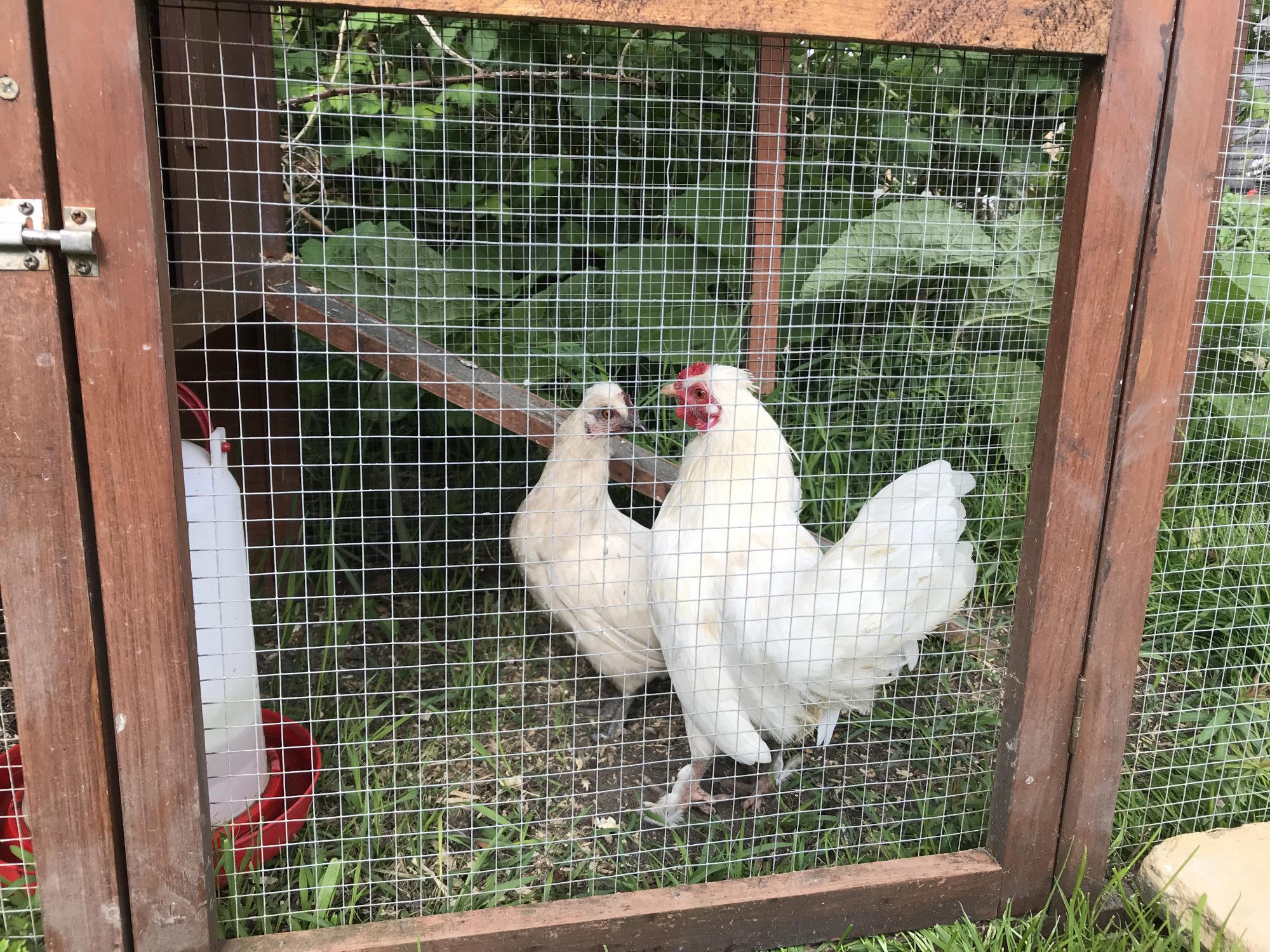 On a drowsy Sunday I decided to buy another hen. Unfortunately silkie chicks weren’t available anymore, but there were Wyandotte chicks. So I chose a sweet brown Wyandotte chick. She was still a bit small, but I didn’t notice how big the difference was until I put her in the coop with the two white chicks. They started chasing her around the coop and kept pecking her the whole time. It was horrible to watch! I watched what was going on for a while but soon it was pretty obvious that this wasn’t a good idea. I took her out of the coop and brought her inside my house. Pretty soon she sat on my neck and head, she loved it. So cute! I named her Bella, somehow that name came to me. At night I put her in the travel basket of Hella which I lined with a bit of straw and duck down from Priscilla’s old nest. (Priscilla is a Muscovy Duck that spent some time brooding here, but she’s left Elvis behind and now she’s been missing for a few weeks.)

But, one chick alone…(you get the drift). So I asked around for advice and decided to bring in another chick. That way, Bella wouldn’t be so alone and maybe together they would stand a chance against the white chicks. So, along came Blondie, from the same group of chicks where Bella came from, but she was still a bit smaller than Bella. They are so adorable together! They wandered around the house together and sat on my neck together. But they also poop the whole day through. It was everywhere! They needed to be able to go outside, but they couldn’t go together with the white chicks yet. We’ll try again after they grow a little bit bigger and stronger. 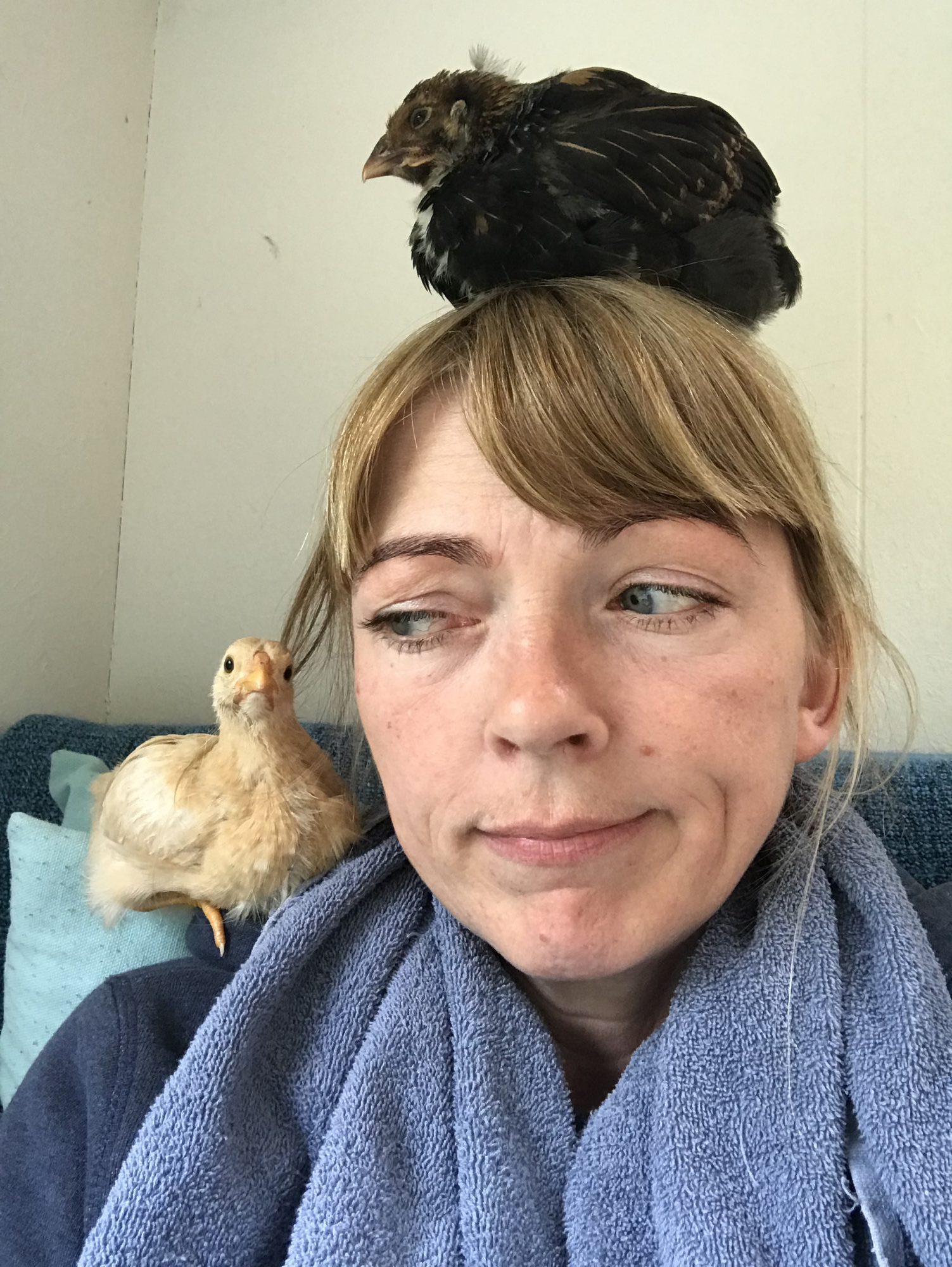 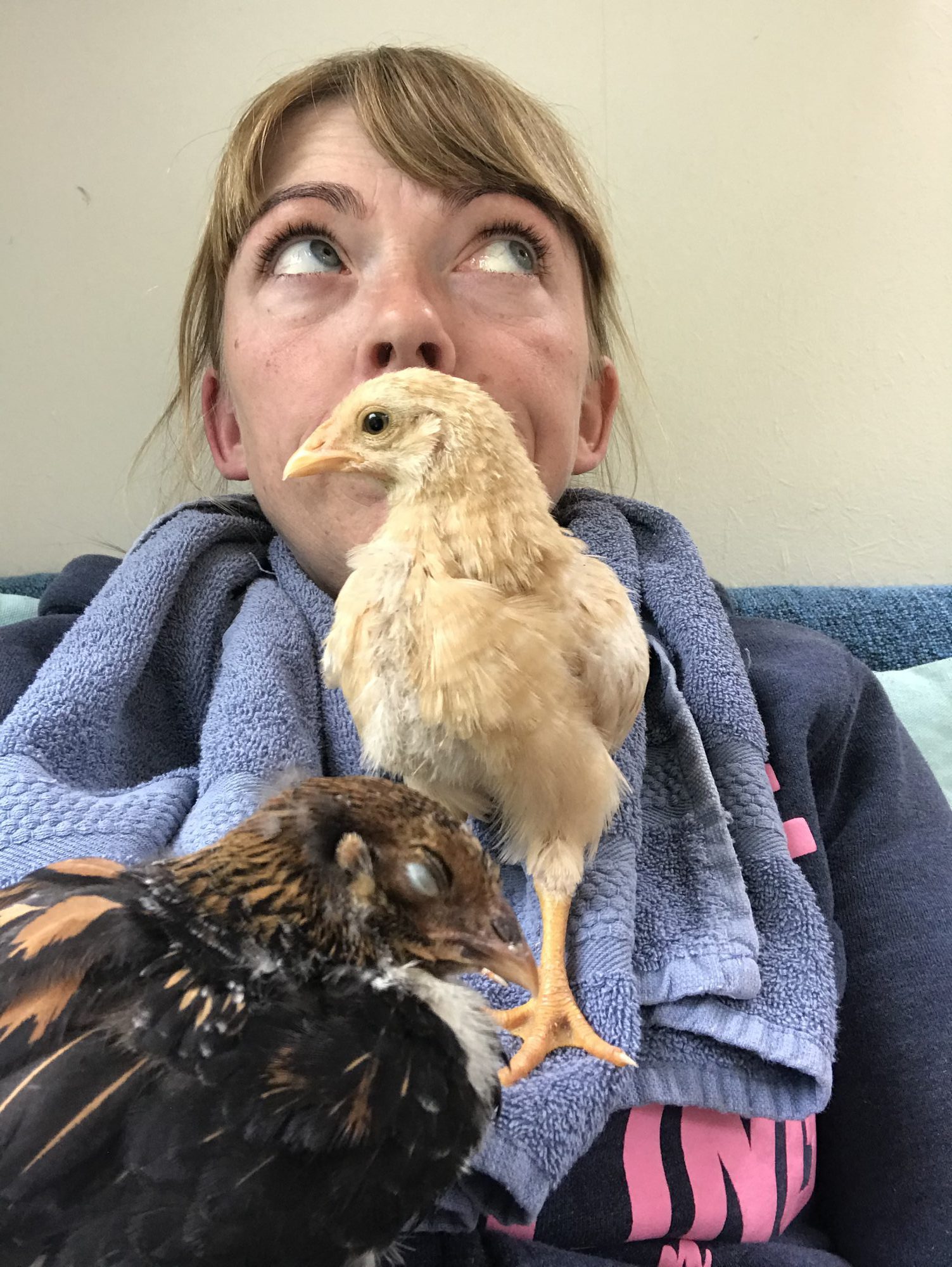 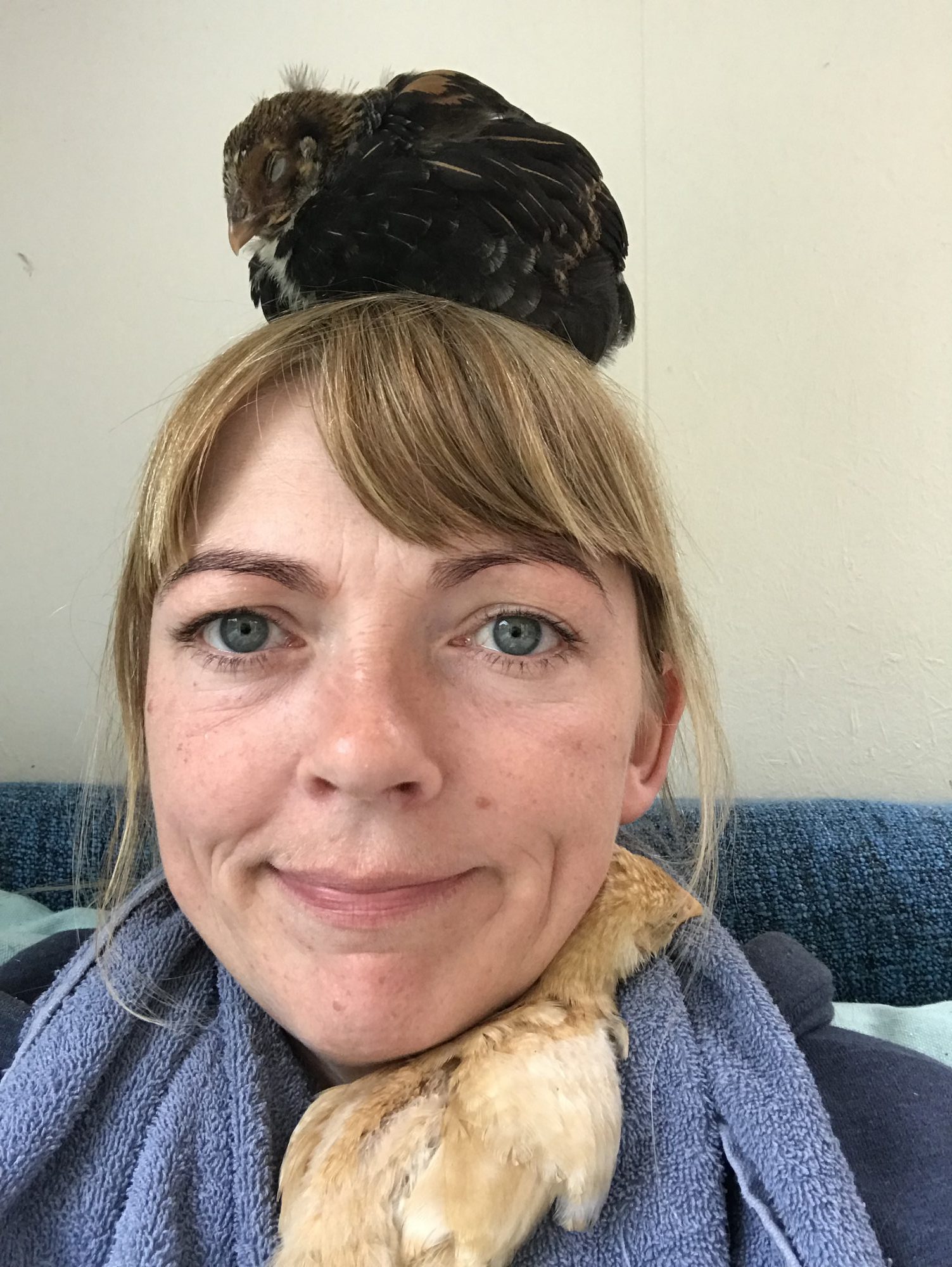 Raymond built a temporary coop where they can stay during the day, close to the other coop so they can see each other and get accustomed to each other at a safe distance. Meanwhile they can roam free every now and then too; while I’m writing this they are all outside scratching. They are doing fine! I can watch them for hours. It’s better than television! Not that I have a television, but it’s still better ;) In a while I’m going to try to see if they can all go in the coop together. At night, when Johnny and June (the white chicks, named after Cash and Carter) are sleeping, I’ll put in Bella and Blondie and hope they won’t butcher each other the next morning. There will always be a pecking order, but there are limits. 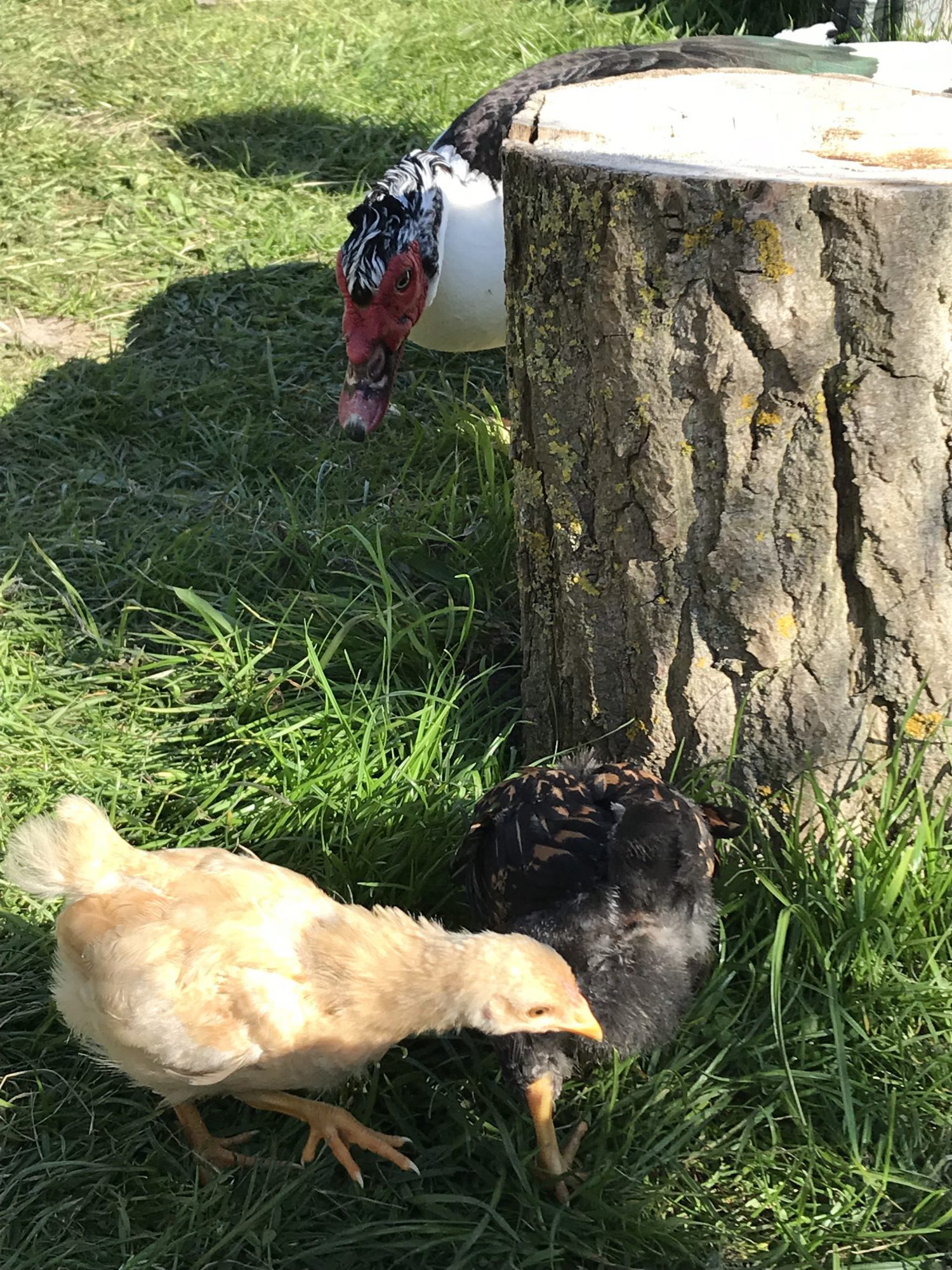 Elvis is fine with everything. Hella doesn’t make much of it as well.  She finds the two birds a fuss in the house, but she doesn’t attack them. I’m keeping an eye on her and I think she knows she’s in trouble if she tries anything ;) ‘Those aren’t chicken nuggets Hella. Friends!’

I love my tiny ranch!