There I am, covered in a thick layer of makeup in the RTL studio in Hilversum. “Move your chair slightly to the left please”, I am asked. The makeup artist is busy with the final touches… and three, two, one,  and we are live. I am a guest on the program ‘Van Liempt Live’, Next to me are two other guests, Adri Duijvensteijn (former Member of Parliament) and Tjeerd Herrema (PVDA councilor Almere). The topic is the Tiny House movement in the Netherlands. The time flies by and I still had so much to say, but that’s how it goes – you get 10 minutes, and everyone wants to express their point of view.

Later when I watch the broadcast at home, I am rather proud of myself and am glad the subject is so well aired, especially the attention given to the problem of restrictive regulations. That’s very much needed! There are so many people who want to live small and sustainably. Once there are places where that is allowed, waiting lists will undoubtedly arise. 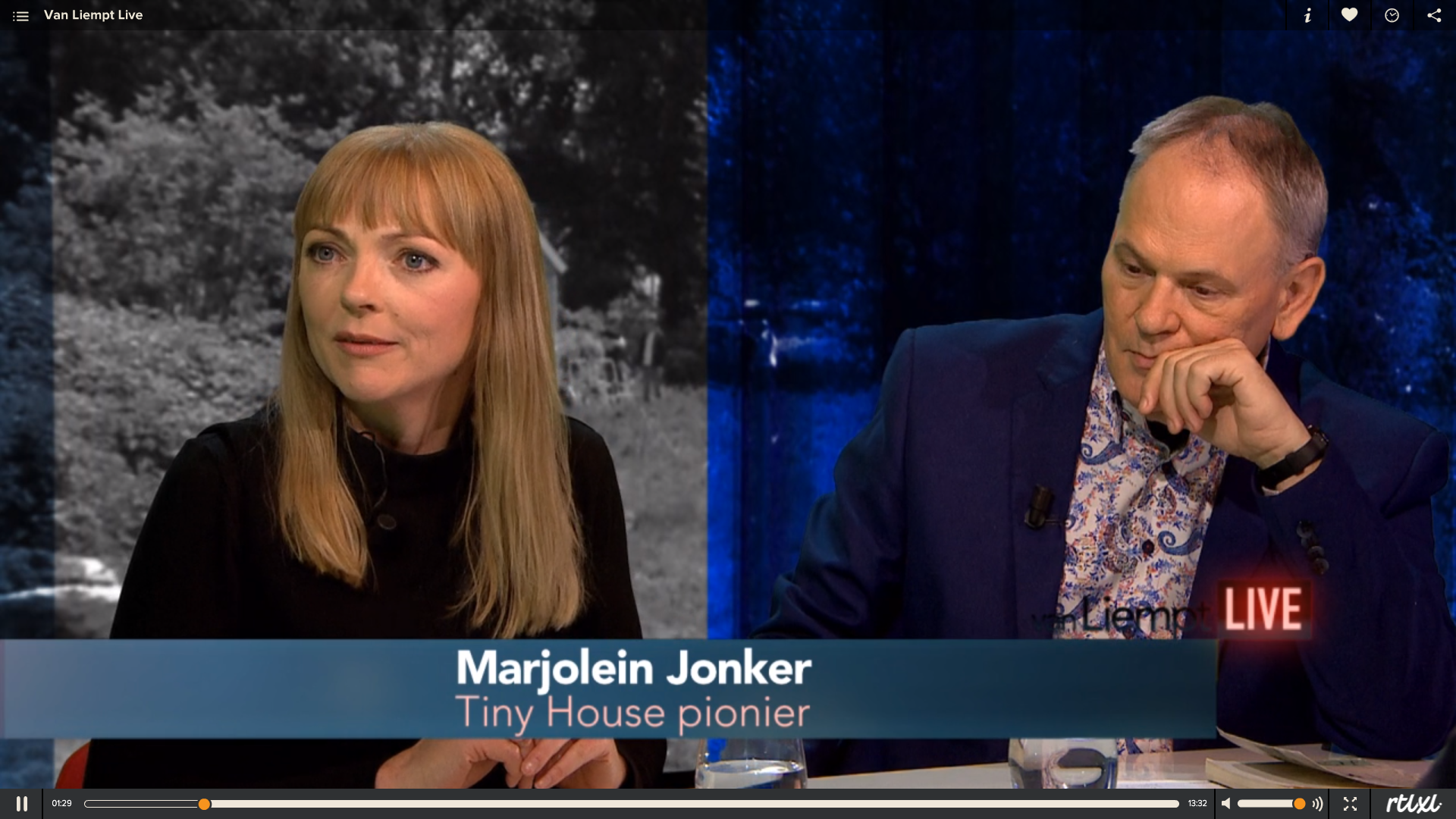 The government is withdrawing their care system. There is less and less money for healthcare and pensions. It is difficult to find a (fixed) job and flexi-time work is becoming the norm. Participation society and collaborative economy are terms that are used too easily. When one of the problems of today’s society finds a solution – namely, building and living in a Tiny House – then we cannot stand by and watch how those citizens have to deal with a wall of impossibilities in the form of restrictive regulations and painfully slow procedures. Unfortunately, that’s exactly what’s happening.

This movement, the Tiny House movement, is a sign that people want to live differently and are willing to rise to the challenge and create the change themselves. It can be a very good solution to several problems: it creates a better flow in the housing market, tackles environmental problems, promotes social cohesion, meets the need for smaller housing due to the increase in single-person households, et cetera. Make it possible for those who are willing to live this way! Municipalities can grant a temporary exemption from zoning plans for such forms of construction and initiatives, and several municipalities are currently exploring these options. Because people are requesting locations themselves, or a political party or even civil service takes the initiative. Here is an overview of municipalities where applications for space for Tiny Houses have been made; municipalities that are exploring the prospects; and municipalities where projects for small and sustainable living are currently being realized:

That is a list of 27 municipalities, and I’m sure I’m forgetting a few! A common problem is that municipalities have limited time available for these projects; they have enough to do as it is. But wouldn’t it be a brilliant idea if these municipalities would join forces and work together to look at the options and come up with solutions? Almere is a frontrunner and has already done a lot of research. Alderman Tjeerd Herrema assured me that he is also willing to share his knowledge. Fantastic! Dear Tjeerd, the time is now! Share that knowledge, get communication going and help other communities to set up pilot projects with Tiny Houses! There is still a lot that is unknown and uncertain but the only way to really learn what works and doesn’t work is to experiment. Not much is needed; there are many capable Tiny House pioneers who would just love to get the chance to help where needed. Use their expertise and knowledge. Give them the space and go ahead and let them do it! Organisations such as Tiny House Nederland are also willing to play a role where needed.

That, in short, was what I was actually wanted to say on TV, but unfortunately there was no time. Thank you very much to Paul, Adri and Tjeerd for the wonderful conversation and your enthusiasm towards the Tiny House movement! And on that note, I would like to wish everyone a very pleasant King’s Day!