“Alkmaar positive about Tiny Houses, but only temporarily” headlines the Noordhollands Dagblad on Friday, January 15. This article comes as a surprise to me. But the content unfortunately does not. This group of councillors does not want Tiny Houses. That has been clear to me for a long time. They find our temporary project here on the Helderseweg charming and they are not bothered by it, but the Tiny House enthusiasts should not expect more from the municipality of Alkmaar. What a disappointing limited vision. What a shame. 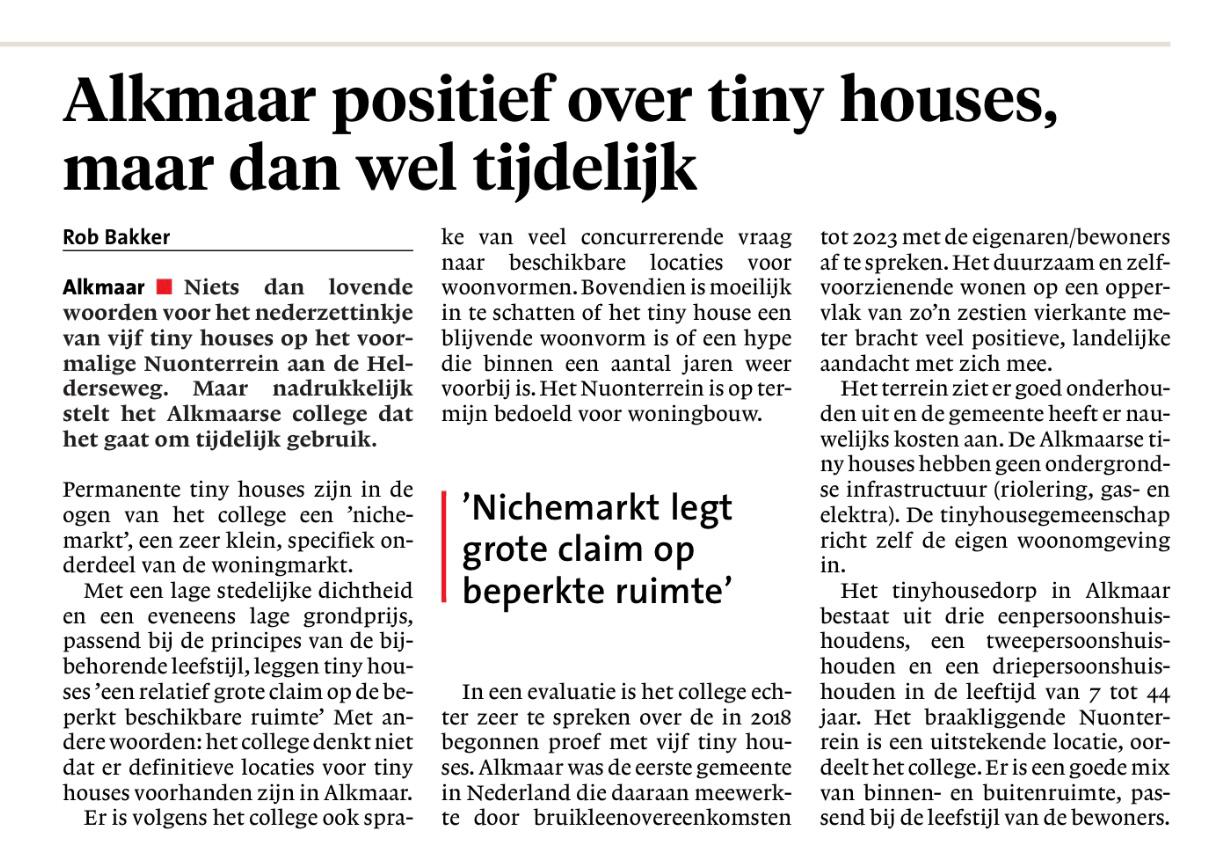 In 2016, there still were decisive councillors in Alkmaar who dared to stick their necks out for innovative ideas from residents. Thanks to the efforts of Anjo van der Ven and Jan Nagengast, I have been able to start a pilot project for five Tiny Houses for five years. This made Alkmaar the first municipality in the Netherlands to experiment with Tiny Houses, and I was the first Tiny House resident with an environmental permit. Christian Braak, who at that time was GroenLinks party chairman, played a very important role in driving things forward; I certainly do not want to leave that out. Without the organization of the information meeting about Tiny Houses in April 2016, where I gave a lecture with Monique and which attracted more than 200 participants, the pilot project might have never seen the light of day

At the time there was already a list of four hundred people interested in a spot in the project. I still regularly get questions about whether there is a place available; the interest is only increasing and not decreasing. Ah, but it’s only a niche market, right? 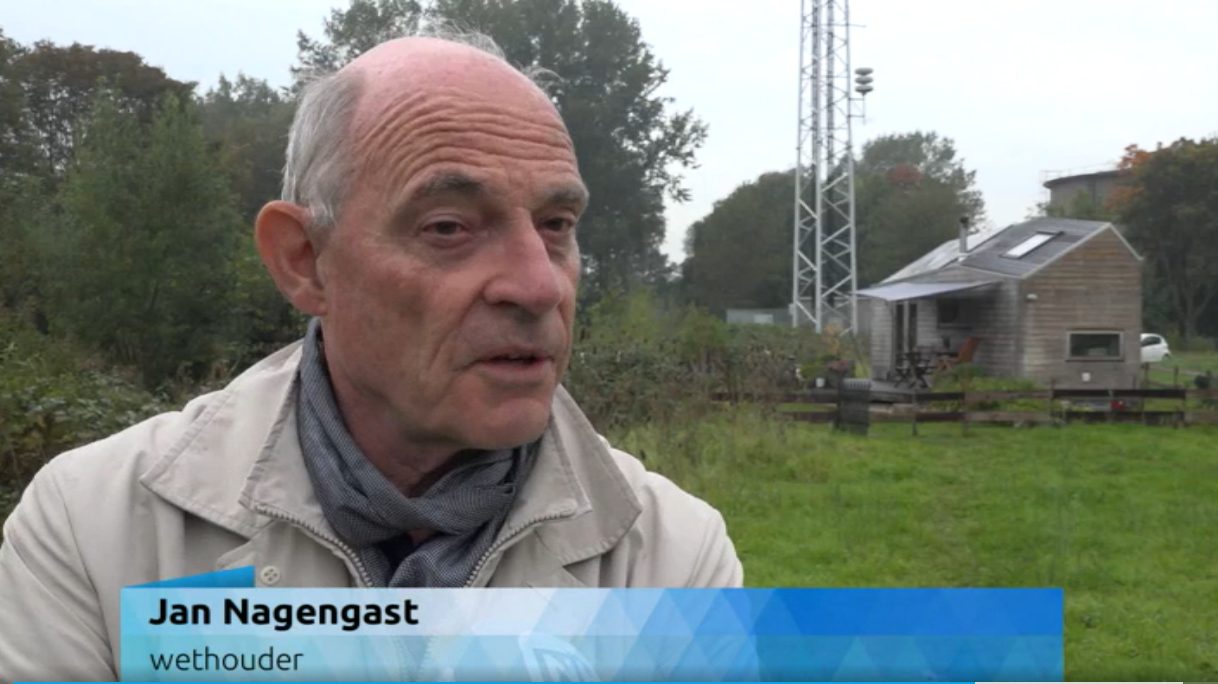 On June 13th 2019, a motion was passed in the local council that instructed the council of aldermen to look for more (semi-) permanent places for Tiny Houses and to seek cooperation with Tiny House Nederland. All this was dependent upon whether there was a positive evaluation of the current pilot project. There was, and I was able to give my input on behalf of Tiny House Netherlands on the entire process of searching for new locations on precisely one occasion. After that things remained quiet despite repeated questions from my side about progress.

No to more locations

Now, in January 2021, the answer from the council turns out to be a “no”. “No” to permanent Tiny Houses, and more temporary locations are still not in sight either. Despite the housing shortage, despite the fact that it is very easy and quick to organize, despite the increasing interest in Tiny Housing, and despite the fact that they are very pleased with the current pilot project – it looks neat and the municipality hardly incurs any costs. Can you make sense of it? I sure can’t.

The arguments of the council cited in the article are very easy to refute:

1        In the view of the council, permanent tiny houses are a “niche market”, a very small, specific part of the housing market.

The interest in small housing forms including Tiny Houses is increasing. Where small homes become available, the number of registrations in no time reaches a few hundred, to over a thousand1. Of course, the housing crisis has a share in this.

But not only that; general awareness that we need to reduce our ecological footprint is spreading. And more and more people are consciously choosing to live small because they attach less value to a large house. They prefer to live affordably, sustainably and green. UPS Marketing Consultancy reported as an outcome in their research in March 2019, that one in five tenants is open to living in a Tiny House2.

More than a third of the population now lives alone. That number is still growing for the time being, according to the Statistics Bureau for the Netherlands2. Whether you place a Tiny House on a plot normally reserved for a terraced house, or you place a spacious terraced house on the lot, does not matter for the space occupied. But it does matter to the resident who likes to live small, affordable and sustainable and who values ​​being outside and gardening more than heating unused space and filling useless space with useless things. And it matters for the environment; let’s not forget that. Building small = using less building materials, living small = using less energy.

Of course, you can accommodate more people in an apartment. But as I explain in this article, you cannot place apartments everywhere and not everyone thrives in an apartment. The municipality of Alkmaar is large, there certainly are places where Tiny Houses make sense as opposed to an apartment complex.

3        It is difficult to estimate whether the tiny house is a permanent form of living or a hype that will be over within a few years. 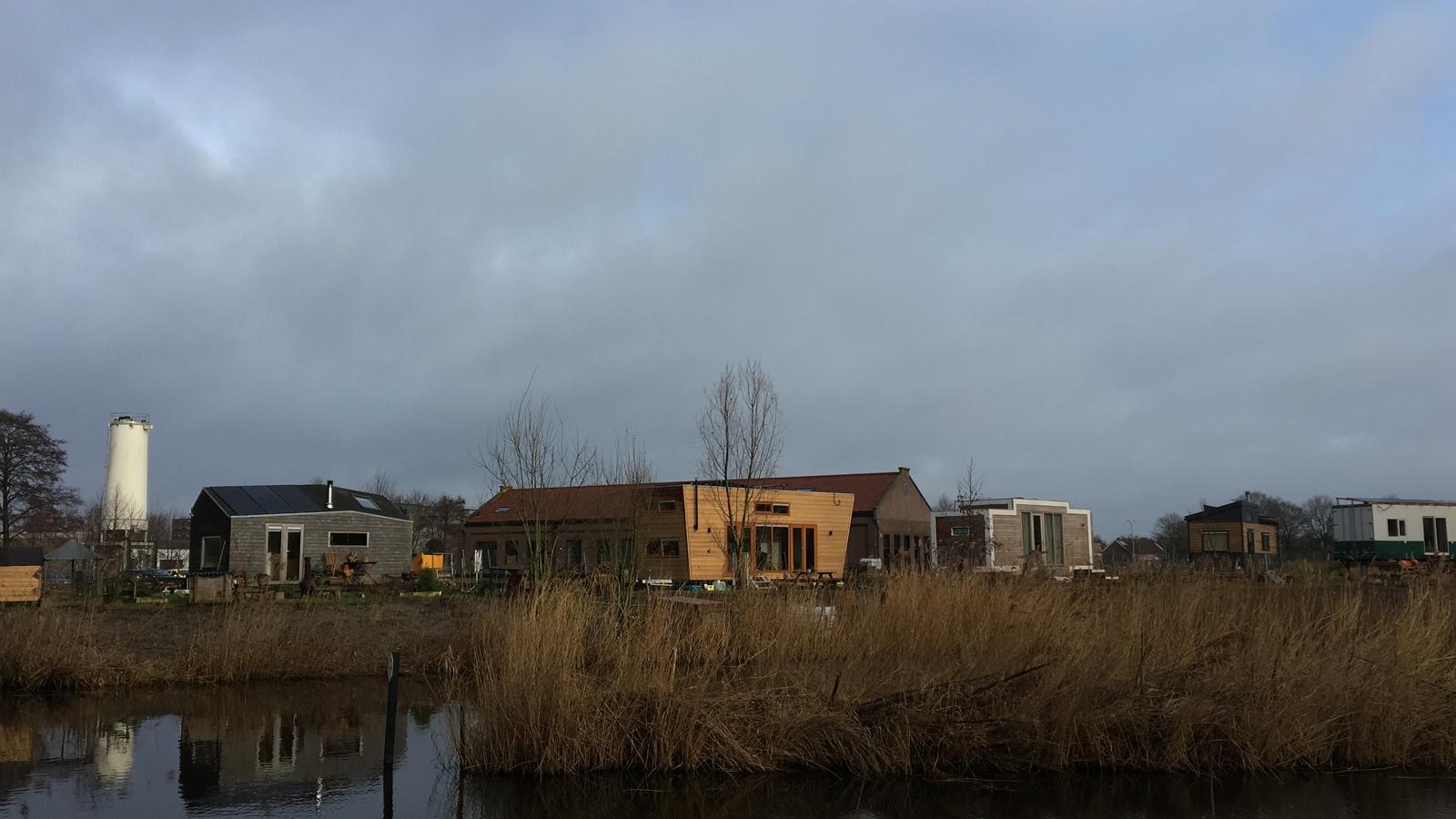 No, dear council, these are non-arguments. I can only conclude that the will is simply not there, and Tiny Housing is being put on the backburner. Why is that? Agreements with project developers? Are Tiny Houses just not financially interesting enough? As is so often the case, is it all about profit maximization? It is deeply saddening and a missed opportunity. The municipality is there for its residents, all residents. It is also there for the growing group of people who want to live small and now have nowhere to go.

Tiny Housing has so many benefits that are valuable to the community and to nature: a small footprint; the opportunity to create co-operative neighborhoods where people can grow old comfortably and are less likely to have to call on the municipality for care and support; housing projects with beautiful functional combinations such as small-scale food production, agro-forestry, construction and maintenance of new nature; you name it. And let’s not forget that Tiny Housing promotes the flow, so that families can live in the (too large) houses that are currently occupied by single and double households.

The municipality does not even have to invest much for this to happen. All they have to do is make land available at a reasonable price and trust people to organize their own living environment – whether in a group or not, collective, (co-)housing cooperative, et cetera.

Sources (all written in Dutch):

1: Some examples of the great enthusiasm for Tiny Houses: