Yesterday I shared a message from the newspaper AD about the new political program of the PvdD (Party for the animals) on LinkedIn, stating that they want to reduce livestock in the Netherlands by 75% and use that space for housing. There was some criticism about that. I have often noticed that there is a lot of resistance to building in the countryside. And that is not at all a bad thing, because we must be very careful with our scarce space and nature and we certainly shouldn’t build everywhere to the max. But it made me wonder… 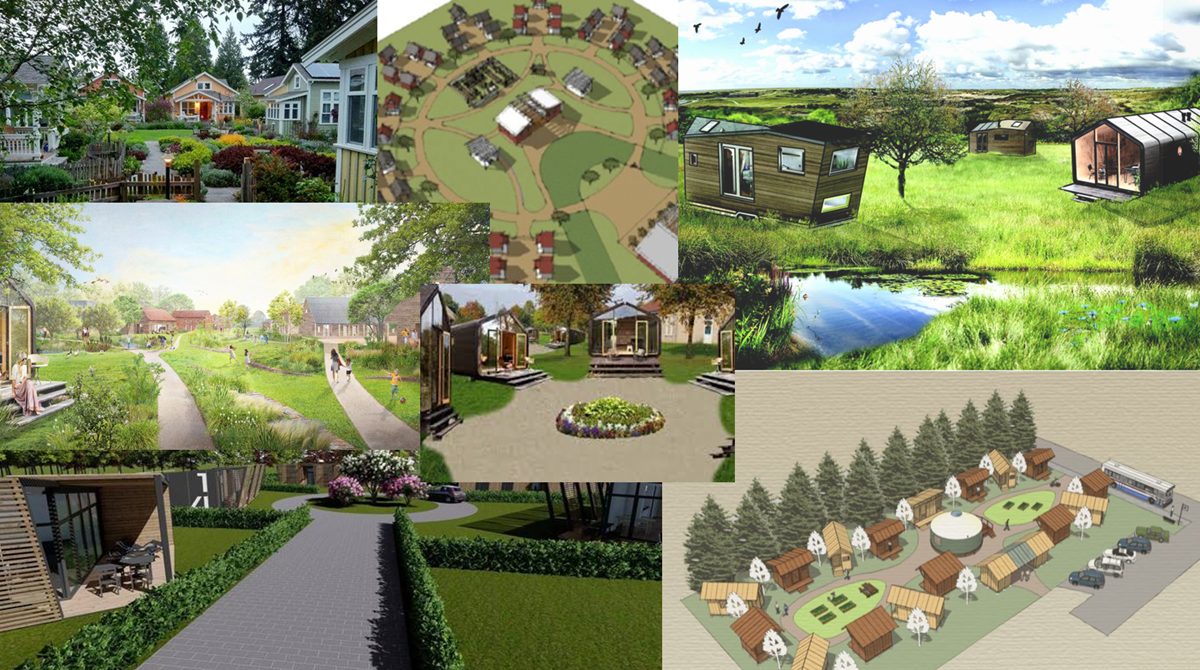 Impression of CPO Calimero. Living in the countryside could also be designed like this instead of dense and high building.

From the safety and comfort of which houses do these people express their criticism? Do they realize that we are in the midst of a  major housing crisis? That more houses really need to be added? And that it is really no fun to be urgently looking for a home but not being able to buy or rent anything?

How do the critics picture the building of new homes? Vinex neighborhoods? Apartment complexes?

I absolutely understand the resistance if the idea is that Vinex neighborhoods and apartment complexes will be built in the countryside. And I also understand that this is the image of living in 2020, because this is the type of housing that has been built the most in recent decades. But that housing supply no longer matches the population (roughly 1/3 of the Dutch live alone and that number is growing) and does not contribute to solving the ecological crisis in which we find ourselves. If you leave it to the market to provide suitable housing, well… We’ve come to realize that this doesn’t work out, haven’t we?  The market and government policy generally focus on economic growth. On quantity and not on quality. More, more, more and not necessarily better. And nature is often left behind. 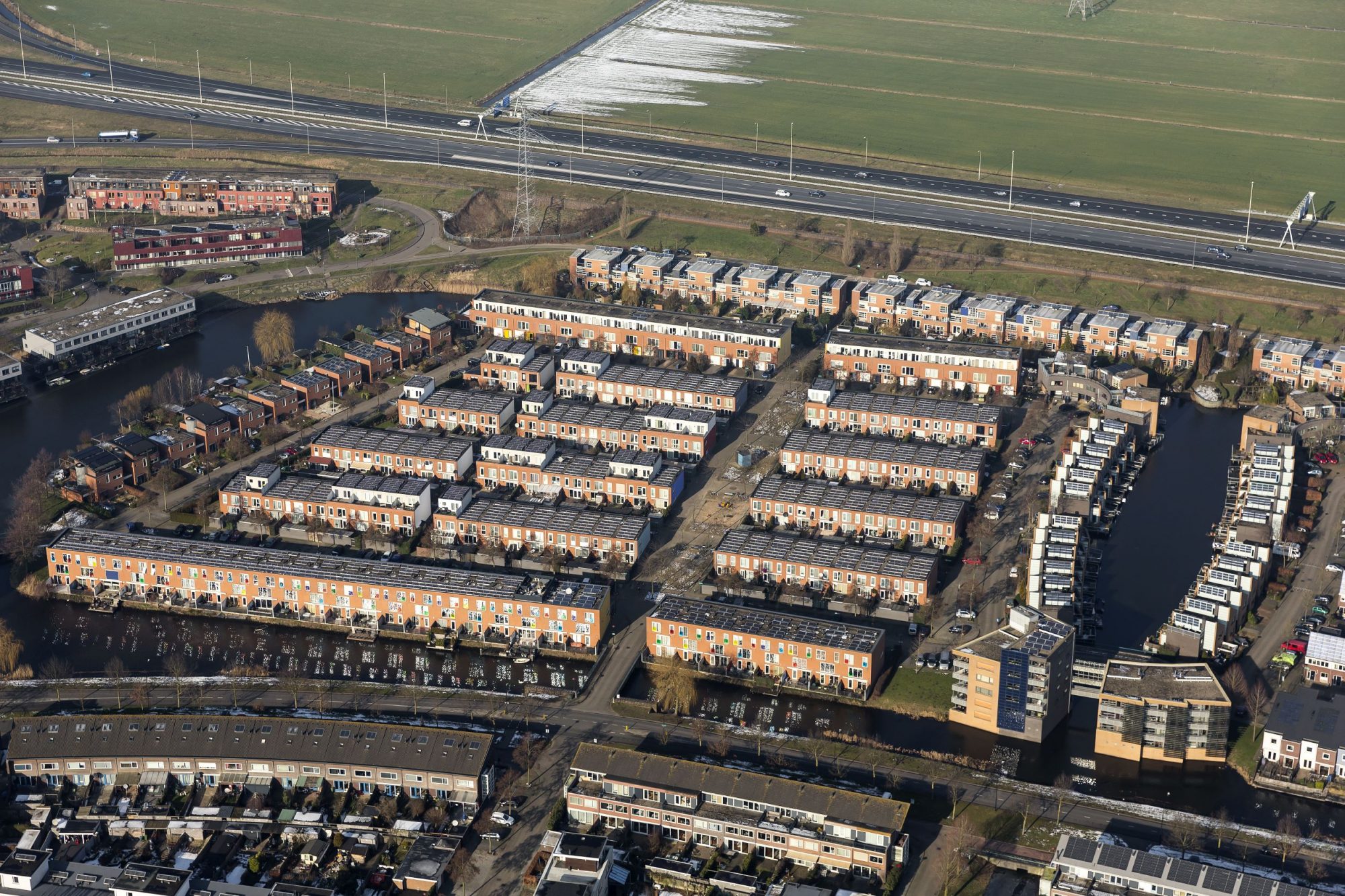 This, of course, is not what we would like to see in the countryside. Fortunately, we don’t have to!

But my dear people, there are so many more forms of housing that place a much lesser burden on nature. Small-scale, built from ecological materials, partly or completely self-sufficient and energy neutral. Community forms that combine a residential function with nature management and/or food production. Housing forms that are not interesting for a market aimed at growth, growth, growth and maximum earning. Companies that want to build ecologically and affordably do exist, don’t get me wrong. I don’t want to write off the entire construction sector here. The problem is that of the market and the government together setting the wrong goals. GDP is not a good indicator of the success of a society.

That is why I make a case for more space for citizens’ initiatives in the housing market. Because there are more and more Dutch people who would like to take the step to a way of life that is in balance and in connection with nature, and that promotes the connection with each other. However, they are invariably not heard and recognized by the market. Because what they want simply is not profitable. The other values ​​that the implementation of these types of housing yields are not or insufficiently seen and are subordinate to the money. That has really been a political choice. Our government definitely has responsibility here. We need good spatial planning, and balance between housing, nature, healthy food production, distribution of space and raw materials. So that there is enough for everyone.

I sometimes wonder if we’ve forgotten where we come from. We have not always lived the way we do now, and there are still many people on the earth who live in a way that harms the earth minimally. You don’t have to live in a mud hut and walk around in a loincloth for that.

Only fifty years ago we lived very differently in the Netherlands. We ate fruit and vegetables that were not drowned in pesticides, we worked fewer hours, and spending time with family was valued a lot more. We ate less meat – it was a luxury. In Europe, the consumption of animal products has increased by 50 percent in the last fifty years. We do not have to go back to medieval times, but we have overshot our consumption behavior greatly. Downshifting is necessary; it might hurt a little but not nearly as much as most people think. In fact, I think it will be a relief for many people. 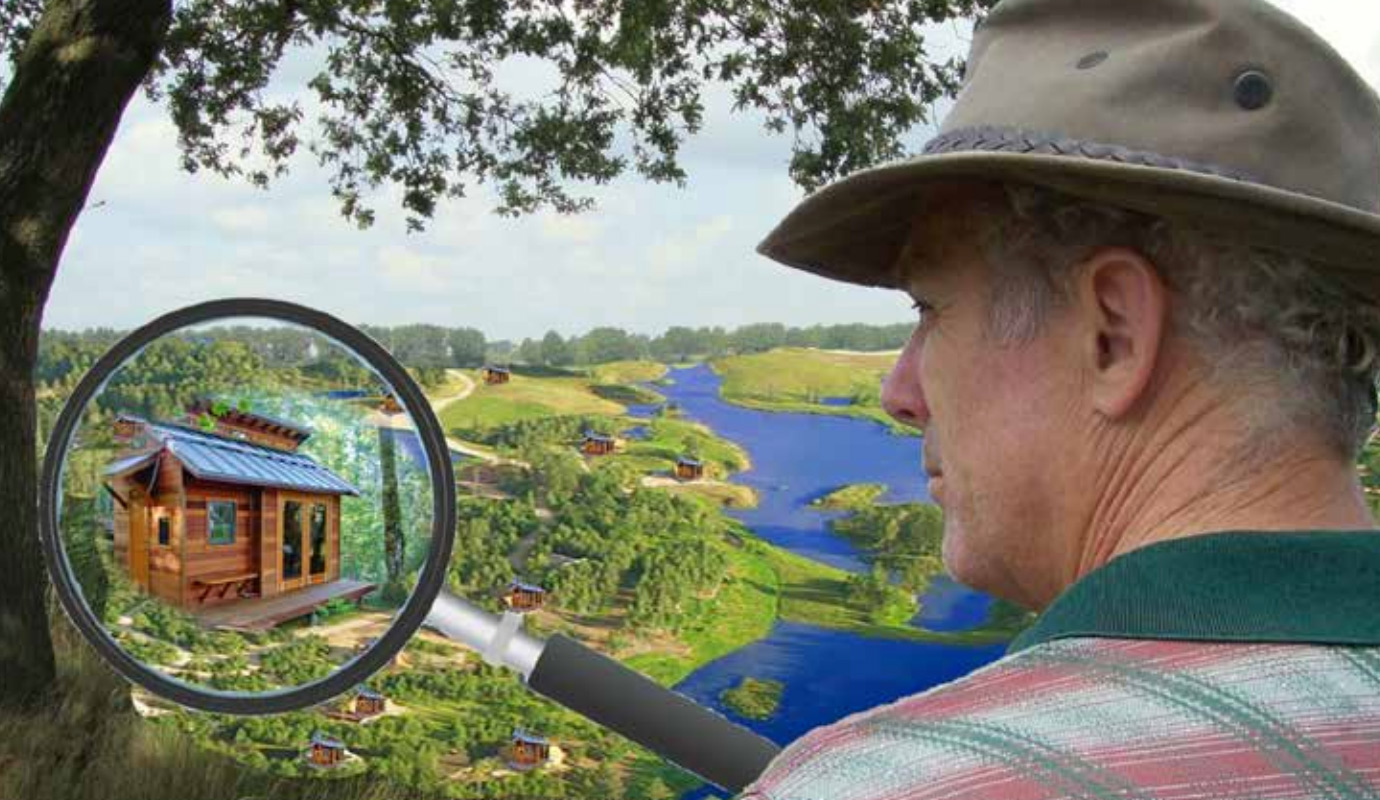 Image of the Peel Nature Villages initiative. Tiny Houses in new nature, so small and so few that you need a magnifying glass to find them.

Then there are the protesters who say “stay off agricultural land, leave the farmers alone”, et cetera. We have designated a very large part of the space in our country for agricultural use. And as PvdD also says, a lot of it is destined for export. If we start to eat less meat, start to see meat more as a luxury and not as a right, and abandon the idea that we must provide the whole world with bacon, then much less space is needed for growing animal feed and keeping animals in appalling conditions. This will create room for a combination of housing and healthy, nature-friendly food production. There will also be plenty of room for small-scale organic agriculture and horticulture, which is according to the UN the only way to provide us with sufficient quality food in the future.

A residential function can very well support the creation and management of (new) nature and food production sites. For example, take a look at the small living and new forest test lab  and the initiative Peel Nature Villages initiative. The residents of small ecologically responsible houses can help farmers with the transition to nature-inclusive business operations. Help by providing them with additional income through the rental of the house or just the lot, as well as helping hands-on in the business. Tiny House community projects can create food forests. So many wonderful win-win function combinations have already been devised. Initiators are desperate for space to implement these plans. Of course, you shouldn’t want to build everywhere, and you should also come up with good frameworks. But you can. For real. 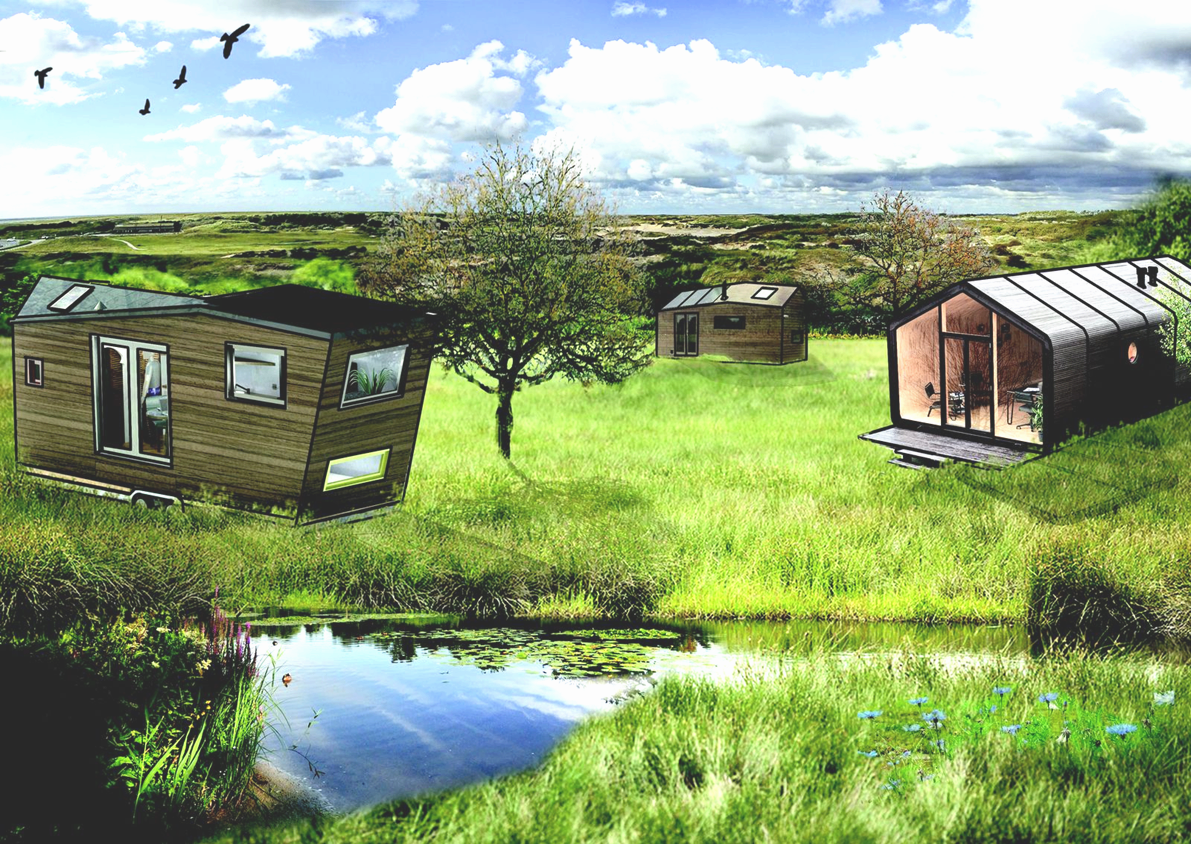 Impression of  Noordwijk Klein, an initiative group that has long been knocking at the door of the municipality in Noordwijk for a residential location. So far without success.

Residential functions, new nature, and healthy food production – they can all coexist. I think we must first stop seeing those functions as separate from each other. I am a human. My primary necessity of life is food and water. I am nature and I cannot live without it. I don’t flourish until I live in a way that makes me feel part of that nature, supports it, and feels connected with it. When I am involved in the production process of the food I eat; when I know where it came from and what it took to get it on my plate; then I will respect the food, the earth from which it comes and the people who made it grow.

The fact is that there are not enough houses now. Partly because too few have been built and the population continues to grow, partly because wrong choices have been made in what we build. As a result of which, space is now far from being used efficiently. You can absorb part of that housing shortage by transforming existing buildings. But let’s see housing in a bigger picture, please. Where are we going? What challenges do we face? How can we design housing so that it becomes future proof? How do we want to live in the future? 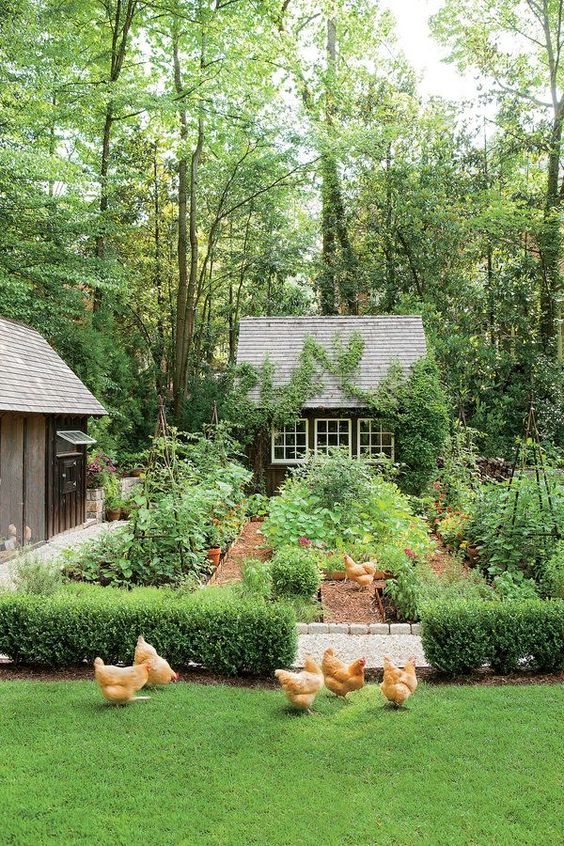 If I have a say in it, it is this: I want to live on a healthy planet. I want to eat healthy food, drink clean water, breathe clean air. I want to enjoy nature and know that I am not only taking from the earth but also giving back, and that there is balance. And that there is room for all other living beings I share this Earth with, who are just as important and valuable as me. I want to stand with my bare feet in the grass, put my hands in the soil, harvest my food from the plant that I have lovingly sown and cared for. Fortunately, I will have the opportunity to live like this starting next year, in the nature-inclusive and circular residential area Olstergaard. Another wonderful example of how it can be done.

There are so many people out there who want to live like that. Give them that opportunity and space. There really is enough space if we distribute it wisely and fairly.

Do you value my blogs? You can support me through Patreon: